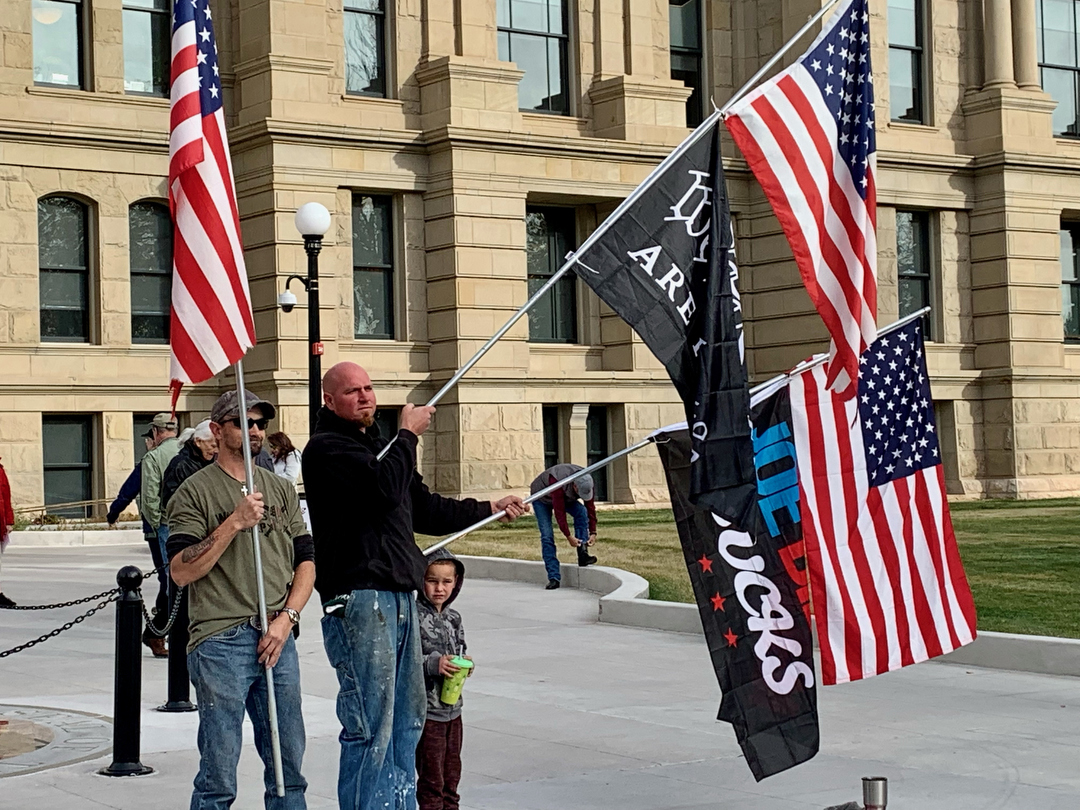 People gather in front of the Wyoming State Capitol on Tuesday, Oct. 26, during the first day of a special session focused on COVID-19 mandates. (John Roedel, Cap City)

CASPER, Wyo. — The situation surrounding the COVID-19 pandemic has evolved rapidly in the 22 months since the first case was confirmed in the United States in January 2020.

Following a patchwork of lockdowns and other restrictions early in the pandemic, December 2020 marked a shift in the pandemic with the first COVID-19 vaccines becoming available under Emergency Use Authorization from the FDA.

Fast forward to August 2021 and the Pfizer COVID-19 vaccine received full approval from the FDA. That set the stage for President Joe Biden to announce a variety of vaccine mandates in September, some of which still await final rules for implementation.

The Wyoming Legislature convened a special session on Tuesday, October 26, largely to consider legislation to restrain or prohibit vaccine mandates in the state.

As the special session continued on Monday, Wyoming Hospital Association President and Leading Age Wyoming Executive Director Eric Boley provided testimony to the Senate Appropriations Committee as the committee considered two pieces of legislation that have passed that House of Representatives that aim to limit vaccine mandates in the state.

“However, we are very pro-vaccine and we think the vaccine has changed the game,” Boley said.

He questioned whether the Wyoming Legislature would be fighting federal vaccine mandates in the same way it is now had mandates been issued under former President Donald Trump.

“I remember not too long ago when we had a different president in D.C. and we were excited about Operation Warp Speed and the vaccine that was going to come and I think it was actually an answer to many prayers,” Boley said. “I wonder if we would be here today if there was a different president in the White House that had issued a similar executive order. Just a thought that I have.”

Operation Warp Speed was a project initiated by the Trump administration to rapidly develop and deploy a COVID-19 vaccine that would be free to elderly and vulnerable populations, as explained in this timeline of COVID-19 developments from the American Journal of Managed Care.

Trump, who was vaccinated in January 2021, revealed in an October interview with Yahoo Finance that he received the Pfizer vaccine and that he “would have been very happy with any” of the available COVID-19 vaccines.

While Trump has encouraged people to get vaccinated against COVID-19, he has also been critical of mandates issued under Biden, as this Newsweek article explores.

Boley told the Senate Appropriations Committee on Monday that while he is against federal vaccine mandates and supports efforts to fight against those mandates, he also wants to support the rights of private companies in Wyoming to make decisions on their own.

“They have a right to do whatever they want to, within the law,” Boley said. They also have to respond and take the consequences of their actions.”

If Wyoming adopts law that is in conflict with federal vaccine mandates, Boley said that hospitals, nursing homes and assisted living facilities will have little choice but to follow federal mandates, noting that such facilities can expect to be under the regulation of vaccine mandates under both Centers for Medicare & Medicaid Services and Occupational Safety and Health Administration rules.

“We’re under two different masters, both of them with really heavy hammers,” Boley said.

“Our hospitals and nursing homes would cease to exist without the federal funding,” Boley said. “So if it comes down to making a decision between state law and federal law, we really have no choice. We are going to have to comply with the federal law.”

Boley said that he supports the state fighting COVID-19 vaccine mandates in courts. On the other hand, Boley said that vaccines have helped change the fight against COVID-19 in nursing homes, with about 90-95% of residents receiving vaccines.

Boley said that vaccinations among nursing home staff is “not nearly as high,” but with a large majority of residents receiving vaccines, Boley said that “we are seeing decreases in the numbers of sicknesses and also deaths in our long-term care facilities.”

Cheyenne Regional Medical Center Assistant Chief Medical Officer Dr. Jeffrey Story told the Senate Appropriations Committee that he also encourages the state to fight federal vaccine mandates in courts but that the legislature should avoid mandating against a mandate. Story said during a House committee meeting last week that the CRMC has not issued a vaccine mandate for employees and does not see this as the best strategy for the organization, but that he did not think the state should limit the ability of private hospitals to make decisions for themselves.

“Our six vaccinated patients are much, much higher risk patients,” Story said, adding that all six are at 75 years old.

He said that vaccines help improve the chances that such higher risk patients will be able to recover after contracting COVID-19.

Story, who is also an OGBYN, said that as private practitioner, state mandates issued in opposition to federal mandates would make it very difficult to make decisions. He said that private businesses don’t necessarily have access to extensive legal counsel to provide guidance on what the business should do when differences that exist between state law and federal law have not been clearly settled. Such medical practices would also risk losing federal funding if they don’t adhere to federal mandates.

Banner Wyoming Medical Center CEO Lance Porter said that when Banner issued its mandate in July requiring employees get vaccinated against COVID-19, it was one of 19 healthcare systems across the U.S. that had issued a mandate. That has since grown to 219 healthcare systems.

Porter said that some have tried to paint Banner Health as unique in issuing vaccine mandates for employees, but that this view is inaccurate as many healthcare systems across the country have done the same.

He said that Banner issued the mandate with the interest of protecting employees and patients and to help “get ahead of this pandemic.”

Porter said that the WMC had 61 COVID-19 patients on Monday, seven of whom were vaccinated.

He added that when staff are not vaccinated and are forced to quarantine, it increases the burden carried by staff members who are vaccinated.

Porter said he opposed the legislation the committee was considering to limit COVID-19 vaccine mandates.

“Please don’t put us in a position where we have to choose between state and federal law,” he said, noting that the WMC gets 60% of its revenue through Medicare and Medicaid reimbursements.

As of 1:30 p.m. Monday, the Senate Appropriations Committee was still working on House Bill 1001 and House Bill 1002. That meeting can be viewed online: