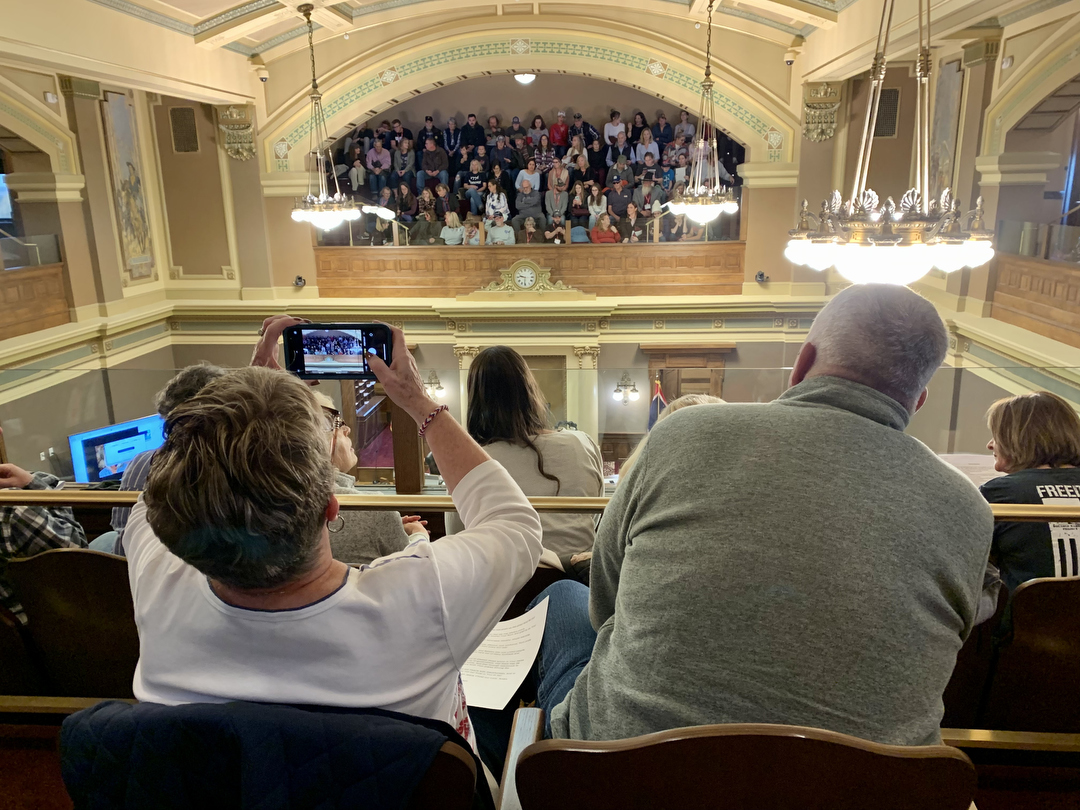 Observers gather at the start of a special session at the Wyoming State Capitol on Oct. 26, 2021. (John Rodel, CapCity)

CHEYENNE, Wyo. (AP) — Wyoming lawmakers found themselves left Wednesday with just one bill still standing out of 40 drafted for a special session to counter federal COVID-19 vaccine requirements, a measure to help fund a multi-state lawsuit against the mandate.

The other 39 weren’t considered or got voted down, including one to carve out vaccination exemptions for employers, employees and even schoolchildren that met defeat in a series of close Senate votes Wednesday.

The lone surviving measure went to a joint committee of senators and representatives to resolve disagreement between House and Senate versions of the bill. The differences included the funding amount: $250,000 for the legal effort in the House got increased to $10 million by the Senate.

After settling on $4 million as a compromise, the committee worked toward resolving other differences between the House and Senate versions Wednesday evening. With committee approval, a negotiated version would head back to the Senate and House for approval votes that would send the bill to Gov. Mark Gordon.

The money would go toward a 10-state legal effort to contest a plan President Joe Biden announced in September to require vaccination for many healthcare workers, federal contractors and workers at businesses with more than 100 employees.

Gordon announced Friday that Wyoming was joining the lawsuit. Gordon and several lawmakers have been skeptical, however, about countering the federal requirements with state ones proposed for the special session, which began Oct. 26.

“We are meddling and making a mess of the laws of this state for businesses and individuals,” Sen. Tara Nethercott, R-Cheyenne and chairwoman of the Senate Judiciary Committee, said in floor debate over the proposed state vaccination exemptions Wednesday.

It would be best to let courts decide the constitutionality of Biden’s vaccine executive order, Nethercott said. But just because the vaccine mandate is headed to court doesn’t mean Wyoming’s legislative branch should “sit on the sidelines,” said Sen. Larry Hicks, R-Baggs.

Echoed Sen. Anthony Bouchard, R-Cheyenne: “This is the seat of power. We are the ones that right the wrongs as well.”

Others, though, wondered what sort of message Wyoming would send by leaving businesses to decide between following state and federal requirements for COVID-19 vaccination.

The bill failed on final reading 15-13 with two senators absent. Though more voted in favor of the bill than against it, a majority of at least 16 votes in the 30-member Senate was needed to pass.

A vote to reconsider passed 15-13. Under reconsideration rules requiring only a majority of those present, the bill proceeded to another vote but failed again, 14-13, with Sen. Brian Boner, R-Douglas and a previous “yes” vote leaving the chamber and not voting again.