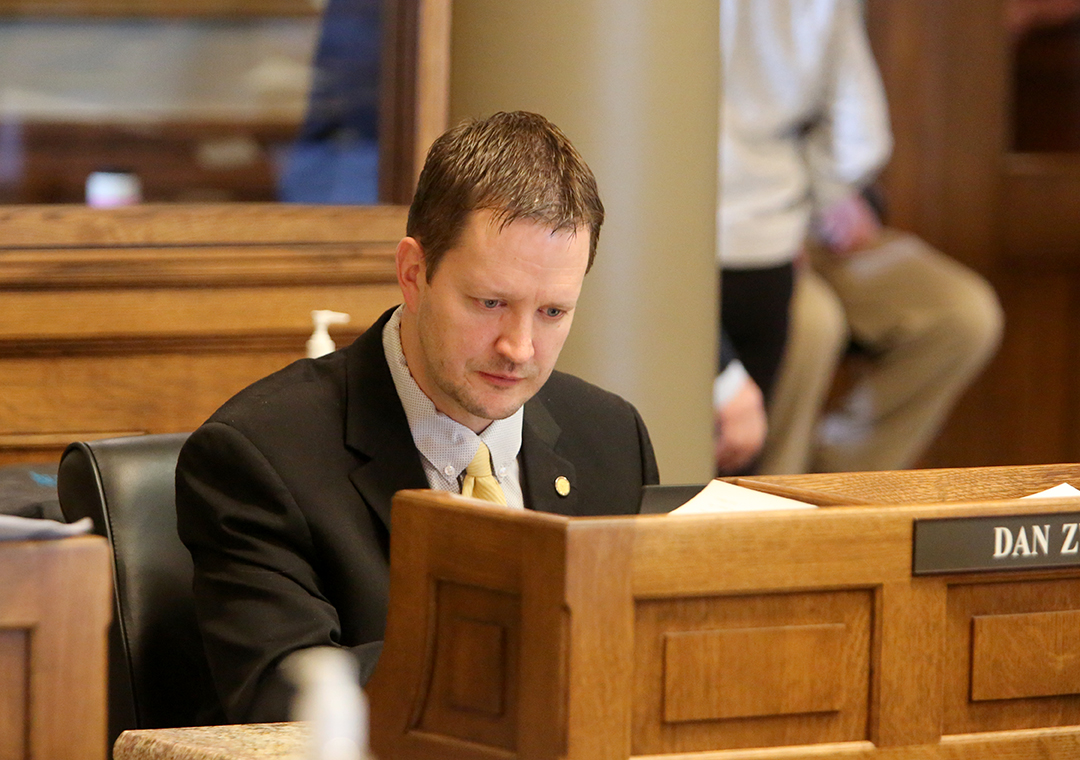 Rep. Dan Zwonitzer (R-Cheyenne) sits at his desk just before the start of Tuesday’s work during the 2022 Wyoming Legislature Budget Session in Cheyenne. Zwonitzer is the chairman of the Joint Corporations, Elections & Political Subdivisions Committee, which spoke with Cheyenne Mayor Patrick Collins about potential new liquor license legislation at the committee's meeting last month in Hulett. (Dan Cepeda, Oil City)

CHEYENNE, Wyo. — Cheyenne Mayor Patrick Collins has made it no secret: he wants to see the state of Wyoming make changes to its current liquor license laws.

And after a full retail liquor license dispute earlier this year in the capital city that saw 11 different entities jousting for just one available award, there’s been a recent call to action — and some in power across the state are joining him.

Liquor licenses were on the agenda (and Collins was in attendance) at the most recent Wyoming Legislature Joint Corporations, Elections & Political Subdivisions meeting last month in Hulett, with conversations and deliberation culminating in the committee asking the Legislative Service Office to draft four new pieces of possible legislation that directly involve the subject.

Per committee chairman and Rep. Dan Zwonitzer (R-Cheyenne), the four ideas include the addition of a new type of license, increasing the fee to apply for a license, requiring an existing license to be returned back to a town or city when not in use (thus removing the private market) and adjusting the population formula for how municipalities receive more bar and grill licenses.

The new license proposal — geared toward businesses where entertainment and food would equal 60% of revenues — would perhaps have the most direct impact in allowing establishments to sell alcohol without many of the constraints of other licenses. Collins had originally brought up an idea of a “tavern” license that would essentially allow businesses to open a bar on the premises with few other strings attached, but conversations with the committee eventually led to the current proposal.

Though Collins said he was appreciative of the time he was given to talk to the committee, he nonetheless found himself “a little frustrated” that the formula for adding full retail liquor licenses wasn’t changed nor was the “tavern” idea brought forward to the point of proposed legislation.

“Retail liquor licenses give you three things: you can have a bar, you can have package liquor sales and you can cater alcohol off your premises,” Collins said. “What we thought was if we took one-third of that — the bar aspect — we’ll call it a tavern license.

“The [Old Cheyenne Elevator project], they weren’t really looking to do anything other than open it up as a bar and have food trucks serving. This license, a tavern, would’ve really helped that situation.”

Still, there are Cheyenne businesses that Collins believes would welcome the proposed license, however. He specifically mentioned the future Ace’s Range on 1505 Pioneer Ave. in downtown with its planned golf simulators and virtual shooting ranges providing more of an entertainment product rather than a traditional bar. Ace’s Range applied for but did not receive the full retail liquor license that was up for grabs earlier this year in Cheyenne, but has noted on its website that it plans to open for business in October.

Boiling it down to building and maintaining the state’s tourism sector — Wyoming’s No. 2 industry — Collins said that he wants to see towns across the state thrive and that he believes the availability of liquor licenses plays a role in that. To him, it also helps keep Cheyenne a fun and fresh place, too.

“I’m thinking about towns like Jackson and Cody, Pinedale, Saratoga … people are there a lot, and limiting liquor licenses hurts them because now you have long lines and wait times in these kinds of places,” Collins said. “We had 1.2 million people stay the night in a Cheyenne hotel last year, so we have the same thing. … And I think it’s a really important consideration when we talk about retaining employees and workforce [to] kind of create that kind of environment where there’s lots of fun things to do.”

Zwonitzer said that there’s interest among his colleagues for progress in terms of making license laws less strict for entertainment venues — along with other barriers he believes impact in-state business — but he’s also expecting some resistance from those from other areas who may be against more alcohol flowing through Wyoming at all.

The goal then, he said, is to not take any proposals too far to one extreme and lose support that way, though he said the committee members around him all seem to be on board in a belief that change needs to come in some form.

“The committee members I have are all in communities that I think are on the same page that we need to do something,” Zwonitzer said. “But I’m not convinced, if this went to a different committee, [that] those legislators are on the same mindset. … Cheyenne needs it, Laramie needs it, but [if] you start talking to Sweetwater County or Crook County or anything in the Bighorn Basin, they’re going to be like, ‘No, we don’t need more alcohol, we don’t need to do these things,’ and it’s going to be a test.

“That’s my other thing I’m kind of looking out for, is to make sure it’s justifiable and we can move the ball down the field, because I think if we try to push too far, we’ll get nothing.”

Zwonitzer sees the proposals as just part of an ongoing evolvement in the state of types of licenses and how they’re implemented, listing microbrewery licenses as a prior example. But he said conversations should continue on in the committee’s next meeting next month in Saratoga — and the deliberations about what to do will remain.

“I think it’s something important to look at and really have the discussion on what it is we want in Wyoming in regards to how much alcohol — and [if] you have to have alcohol at every facility — to have a good time,” Zwonitzer said. “I don’t know, but that’s I think the next discussion we’ll be having in August.”