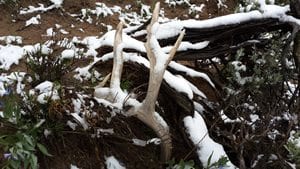 CASPER, Wyo. — The Wyoming Game and Fish Department says that legislation passed in 2019 to expand the regulated area for shed antler and horn collection in the state is now in effect.

“The updated regulation expands the seasonal closure area to include expanded critical wintering habitat and enact a new opening time of 12 noon on public lands,” Game and Fish said on March 25. ” The annual closure is to protect wintering big game.”

The 2020 shed antler and horn collection season will open on May 1.

Until that time, collecting shed antlers and horns is prohibited in the following areas:

Game and Fish also makes this map as well as the new regulation available online.

“A violation of this regulation carries the same penalties as many other Game and Fish violations.”

“In the winter, big game animals such as mule deer and elk use most of their energy just to survive,” King said. “Limiting disturbance during this critical time of the year may help them hold on to more of their valuable reserves.”

The expanded closure area will be a benefit to mule deer herds, in particular.

“Extending the closed areas in southeast Wyoming will benefit mule deer on critical winter ranges in the Sheep Mountain and Platte Valley herds,” King said.  “The Game and Fish Department has established mule deer initiatives for the Platte Valley and Sheep Mountain mule deer herds to address concerns with these mule deer populations. A lot of people recreate on winter ranges in these areas, and this new regulation can make a difference in reducing disturbance during a crucial time for mule deer and other big game animals.”

Once the collection season opens, people who find antlers or horns attached to a skull must have these tagged with an”Interstate Game Tag” available from Game and Fish law enforcement.

“Individuals need to contact a game warden prior to removing the head from the field,” Game and Fish says. “There is an $8 fee for the tag.”

“Game and Fish has closure information specific to the Laramie, Green River, Pinedale and Jackson regions online or by contacting those offices. To report shed antler or horn collection violations, call the STOP Poaching Hotline at 1-877-943-3847 (1-877-WGFD-TIP) or text keyword WGFD and message to TIP411 (847-411). Violations may also be reported online at the Game and Fish website.”