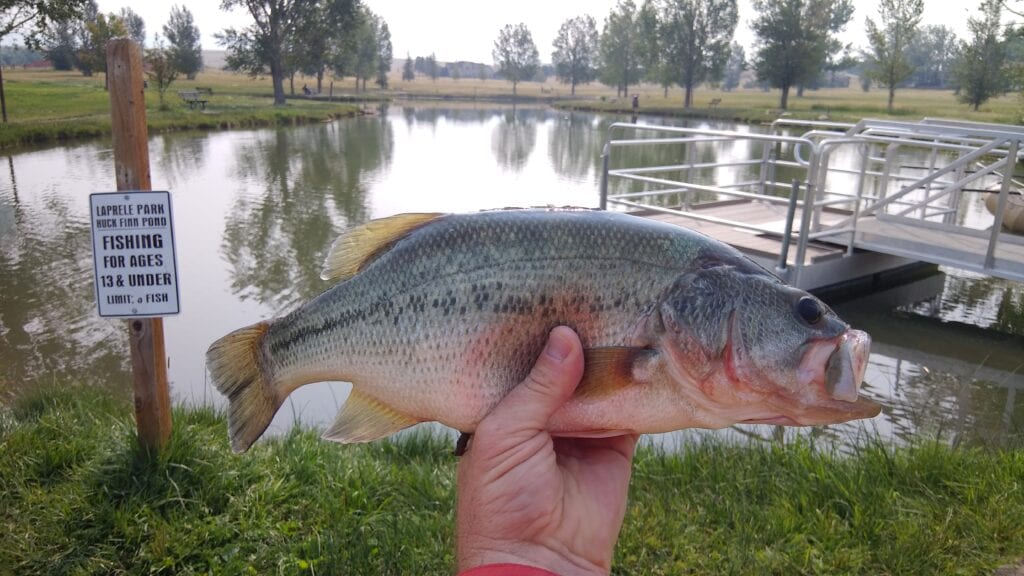 “There are harsh penalties for moving live fish in the state,” Game and Fish said.

Game and Fish biologists received a tip in mid-August that a largemouth bass could be in the pond. The Fisheries biologists then sampled the pond using electrofishing equipment and caught a 15.2 inch largemouth bass “at the exact location the tipster reported seeing it.”

They also caught a brown trout weighing over two pounds.

“While both fish would be excellent catches for one or two children, neither species belongs in Huck Finn Pond,” the department says.

Laramie Region Fisheries Biologist Steve Gale says the department manage the pond “as a catchable trout fishery for youth anglers under the age of 14.”

“Largemouth bass and brown trout should not be present in this pond,” Gale added. “Both species will prey on smaller fish, including native fish and trout stocked for young anglers to catch.”

“Additionally, largemouth bass do not occur in the Laramie River within the upper Laramie Valley and would be detrimental to the fishery there if established through illegal introduction. “

When they caught the largemouth bass, biologists dissected it and found a native Iowa Darter in the bass’s stomach. They also studied scales and otoliths on the bass to try to determine where it came from.

“The bass was either raised in an aquarium until it got too big and was released into the pond, or someone transplanted it from another location,” Gale said. “The brown trout most likely was moved from Spring Creek, as there is a wild population in the creek. Both scenarios are illegal.”

Wyoming Chapter of Backcountry Hunters and Anglers Chairman Buzz Hettick, a Laramie resident, reported the illegally stocked fish. Gale thanked him for providing the tip to Game and Fish.

“Illegal fish introductions can destroy valuable sport fisheries and native fish populations,” the department adds. “Penalties may include lifetime revocation of Wyoming hunting and fishing privileges, a fine up to $10,000, up to a year in jail, and penalties incurred by the department in removing the fish. If anyone has information on this illegal fish stocking, please call 1-877-WGFD-TIP to report.”

“Anglers are reminded that any fish placed on a stringer, in a container, in a live well, or not released immediately to the water shall be considered reduced to the possession of the angler and must be killed prior to being transported from the water of origin. It is also unlawful to release, abandon or allow to escape any unused baitfish or any fish that has been kept in an aquarium. Wyoming fishing regulations can be found online at https://wgfd.wyo.gov/Fishing-and-Boating/Fishing-Regulations.”