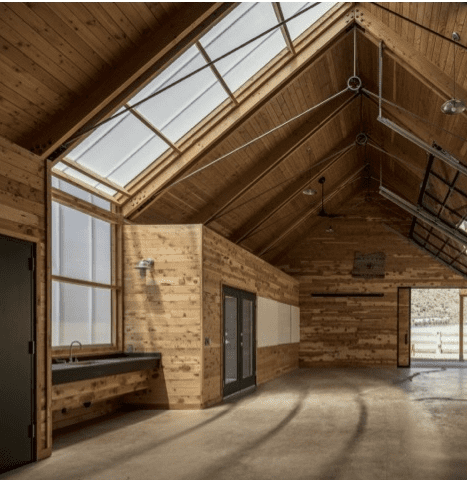 An example of a two-plane window roof design that was chosen for back (NW) side of the proposed new Casper Mountain Trails Center design ( courtesy of Stateline No. 7 Architects)

The original facility was built in 2003 with the help of volunteers led by members of the Casper Nordic Club and Brubaker Construction. It hosted events from cross-country ski meets to weddings, providing shelter and hot meals to trail users. Casper Mountain landowner Tracey Lamont described it as a “rallying point” for recreationalists and the community at large.

The facility began to present structural issues in February and was deemed unsafe to occupy in May.  The demolition of the lodge took place over the first week of November.

Last week, a modular unit built by the Amish in Montana was installed on the site to serve for the coming winter season. It has two ADA-compliant bathrooms, electric heat, and a metal roof with a wood exterior, and will remain a county asset when the new lodge is complete.

Friday’s presentation by Murtha and Fridell comes following an October meeting of the same stakeholders, including the Natrona County Parks Board, the Central Wyoming Trails Alliance, and Casper Nordic Club. At that meeting, blue-sky, ground-up considerations for the design and function of the new facility were voiced and compiled.

Better orientation to the sun, a larger parking lot, kitchen facilities, and adequate space and ventilation for ski waxing operations were among the common requests. The new plans also allow access to the facility without crossing existing trails, as had been the case previously.

A catering kitchen, used for heating up food prepared offsite, was part of Murtha’s baseline package. The viability and affordability of a commercial kitchen, in which food can be prepared on site, would be considered later by the Natrona County Commissioners. Amy and Terry Thomas, who ran the kitchen in the previous incarnation, are keen to continue those operations, Murtha said.

3 site plans were presented, and strong consensus formed around the third, site plan C. The plan set the new facility further northwest into the woods than the other proposals and the original site, which will prove more costly, Murtha said.

A single-sided A-frame design (or “single-pitch roof”) was presented based on comments gathered in October.  The metal roof would slope to the back side of the building, which would sit cantilevered over a drop so snow could slide off behind the building and pile up “all winter long,” Murtha said, without interfering with operations or needing to be plowed.

A metal roof with wood siding is part of the design. Two kinds of wood, weathered and burnt-faced, are being considered. Both are considered attractive and weather-resistant, and the kiln-fired variety repels insects, Murtha said.

A loft area above the bathrooms on the east side of the building was also part of the baseline package. Murtha and Fridell imagined the area could serve as a coaches’ staging area during ski events or a bridal room during weddings.  Its orientation would also made it ideal for observation of ski events, as the existing trails could be designed to intersect at a crossroads to the northeast of the rear of the building.

A ramp leading up to a patio would provide primary ingress, and amphitheater style steps are also part of the design. A great room with a central fireplace makes up the majority of the ground floor design, and could fit about 150 people. The eastern section of the building with the bathrooms and storage lockers could be accessed separately during extended hours while the rest of the facility is closed.

On the west side would be a garage-style ski-waxing room and loadout area.

Tia Leschin, Vice President of CWTA, and Bruce Lamberson of the Casper Nordic Club, both run outdoor recreation and equipment rental shops in Casper. Neither had any appetite to run an equipment rental operation in the lodge itself, which they said would be costly and take up far too much space.

Site plan C also features an expanded parking lot with over a hundred spaces and plenty of room for bus parking and snow piles. A proposal to build a road connecting the lot to the Skunk Hollow parking lot the east was deemed unnecessary by the stakeholders.

Stuart Hill, a member of the county parks board, said plan C’s larger parking was an investment in the future. Murtha put a tentative price tag on the site C plan at between $2.5-2.8 million, and Hill said it would likely be closer to $3 million. They said the recent upgrades to Hogadon, which is run by the City of Casper, cost around $5 million.

Murtha and Haigler opted not to release their designs to the public until the Natrona County Commissioners had had a chance to consider them, which Haigler said would be “putting the cart before the horse.”

The commissioners are the next stop in the process, pending a few design tweaks and refined cost estimates after Friday’s meeting.

The photos included in this article represent specific design elements favored by stakeholders and included in Murtha’s proposals, and are not Murtha’s designs for the lodge.

Unanimous consensus was also reached on a pair of designs for a rental/picnic shelter on the site. A traditional open A-frame design surrounded by wind-blocking sectional gambion walls (wire frames filled with rocks) was favored. An alternative design with a single-slope roof was appreciated for its modernity but thought to be lacking in ‘sheltering’ capabilities.

Ground surveys of the proposed site are currently in progress, Fridell said. One of the problems with the previous facility was that a spring was situated underneath, causing mold and structural issues, which likely went unnoticed because 2003 was a dry season.

Haigler and other county officials seemed optimistic that the new facility could be in place by the 2021-2022 winter season. Keither Tyler, a retiring attorney, Casper Nordic Club member, and one of the leaders of the original facility’s construction, said he is more concerned that the new facility is “done right,” regardless of whether it’s ready by next season.

Whatever the new facility ends up being, Lamont insisted that its title reflect the variety of uses.