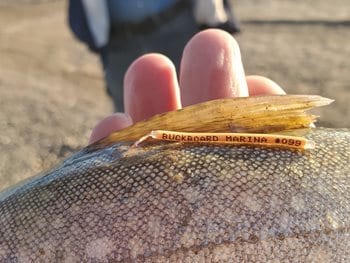 CASPER, Wyo. — The Wyoming Game and Fish Department said on Tuesday that two anglers from the Cody area have won prizes after they caught tagged trout and reported this to the department.

Game and Fish said that trout have been tagged in the Buffalo Bill Reservoir and the North Fork of the Shoshone River as part of an ongoing research effort to help biologists understand trout migration in the area and “better evaluate the effectiveness of current regulations in place to protect migrating fish.”

“Richardson won the grand prize of a Traeger grill and Channon won the runner-up prize of a Yeti soft-sided cooler. Prizes were donated by the Adiposse chapter of Trout Unlimited.”

Anglers who catch tagged trout are asked to report the capture along with the tag colors and numbers. People should also report the date and location where the fish was caught and whether the fish was harvested or released.

Game and Fish said that a raffle will be held for the next three years “in an effort to promote this important research and as a small token of thanks to anglers willing to report tagged fish.”

“Most fish will have two different tags,” Game and Fish said. “Many anglers have found that taking a close-up photo of the tags with their cell phone is an easy way to record and read the tag numbers.”