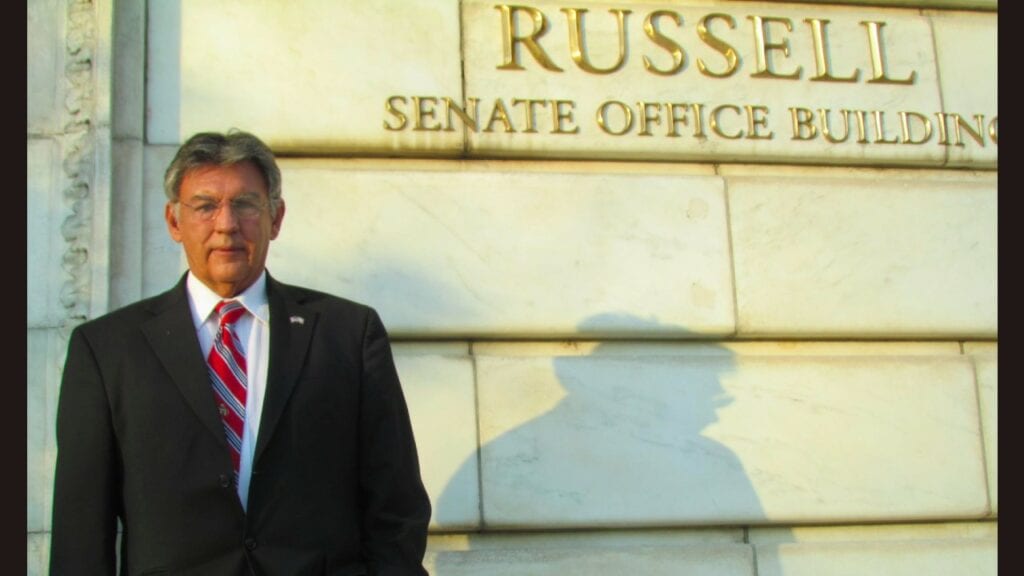 CASPER, Wyo — “I’m probably considered a Republican in the other 49 states,” Mike Gilmore told Oil City News. He’s the Democratic candidate for the Wyoming House from District 59, and faces Republican and Mills town planner Kevin O’Hearn for the seat.

“I’m not opposed to guns… Hunting and fishing are a way of life.” He added that he considered himself a “mega hunter” and owned about 80 guns.

Gilmore previously served a term in the seat from 2009-2011 before losing to Bunky Loucks, who held it until he retired this summer. His wife Mary also served three terms in the seat.

“The only new tax I would really consider would be a tax on corporate income; big box stores that make a million dollars a day and don’t pay a penny of corporate tax in Wyoming,” said Gilmore. He said the bill he’d support would only tax companies with 100 or more stockholders.

“They buy a business license and pay a little property tax.”

Like District 38 Rep. Steve Hashman, he said he’d be in favor of lowering severance taxes on the oil and gas industry to incentivize producers to stay, at least until the price of a barrel of oil rose above a certain price, with $40-per-barrel being cited as a tentative threshold.

He’s optimistic that energy prices will rebound to some degree. “If it’s a cold winter, natural gas prices will go up.” He said oil was likely to increase in value if people began to travel more, and that lumber was already rising as home construction began to tick up. He added that he follows the state Consensus Revenue Estimating Group (CREG) report daily.

He also said that trona mining is “still popular” in Sweetwater county and uranium mining was still viable.

Gilmore said one of the myths about Wyoming Democrats is that they are universally opposed to oil and gas development. “There’s a lot of controls on those types of companies.”

He said he’s confident that legislators would be able to evaluate the environmental impact of mining operations on a case by case basis. “You got to do your due diligence and read every bill and figure out how it affects your constituents. It’s a statewide office but you represent people in your district.”

Nevertheless, he said Wyoming needs to diversify its economy, with an emphasis on tourism.

“We’ve come out of dismal situations before and how it happened was you got more people working and paying taxes.”

He added that cutting was going to be a challenge and that people he’d talked to hadn’t offered many options for easy cuts they could live with.

As the appointed state school facilities commissioner, Gilmore said he was concerned about the recent 10% cut affecting school construction and repair projects. He said some conditions are  “really deplorable” and that many schools were both in disrepair and exceeding capacity.

“Health care is huge issue, for the elderly,  especially.” said Gilmore, who was chair of the Community Health Center of Central Wyoming for 10 years.

He was distressed to see the PACE (Program of All-Inclusive Care for the Elderly) program being phased out of the state health budget over the next six months.

“It was a program that kept elderly in their homes, and from what I understand it costs around $90,000 per year to have them in assisted living, where the state’s going to pay anyway, or it costs around $40,000 to keep them at home with home health care.”

Keeping it, he said, was a “no-brainer.”

Medicaid expansion is also a priority for Gilmore, which has been available since the Affordable Care Act passed nationally in 2010. Under the program, federal money would cover 90% of the cost of expanding the program, with Wyoming contributing 10%. In 2019, state health officials estimated that it would cost the state about $9 million to sign up 19,000 people who would be eligible.

“If we’d have got on right at the start  we could have gotten it for nothing,” Gilmore said. “Each year wait there’s a penalty; now it’s up to 10%.”

Gilmore is proud of his record from his 2-year term and would like reintroduce some of the bills from that time that didn’t pass.

“When I was a freshman legislator I sponsored a bill that gave preference to Wyoming contractors whose bids were within 5% of the lowest bid.” That bill passed.

“One of the bills I had was to give waitresses more than $2.13 an hour. The lobbyists came out of the woodwork saying it would put every restaurant out of business.” He said the same year his bill failed along party lines, Montana paid waitresses minimum wage, and restaurant prices had not gone up.

“I had another bill that I thought should have passed that would have made insurance companies tell you why they’re denying a claim. In Wyoming they don’t have to tell and they won’t tell you.”

The bill passed the house but died in the Senate: “I thought it was going to make it.”

Gilmore said his biggest coup while serving as a legislator was when he organized local sportsman to thwart a land swap on Muddy Mountain. He said the State Land and Investment Board was set to vote on the swap with a private cattle company that would have traded 4,000 public acres on Muddy Mountain for 5,000 acres near Glenrock.

“There’s no way that trying to keep this virus from spreading should be political. I believe what the scientists have to say, and they all seem to say if you just wore the damn mask you could cut this thing in half. But those kind of things just aren’t being enforced.”

“It takes something really earth-shaking to make people pay attention. In the end the good sense of the American people usually prevails.”

“What made me chuckle was when [New Jersery] Gov Chris Christie got on TV before the ball game said ‘I really screwed up by not wearing the mask’.”

“I don’t like it,” Gilmore said of the Wyoming Department of Transportation’s exploration into a Road Usage Charge (RUC) that would treat Wyoming roads like a metered utility.

Gilmore, who spent 39 years of his career as an engineering department supervisor for WYDOT, added that highway department was citing the same budget shortfall it had before phasing in a 10-cent fuel tax increase, which he said had been spread out amongst “middlemen” and hadn’t had much impact on final prices at the pump. “They’re going to survive,” he said. “A RUC is a last resort.”

He added that the federal government should be stepping in to invest in maintenance and infrastructure.

The general election is Nov. 3.