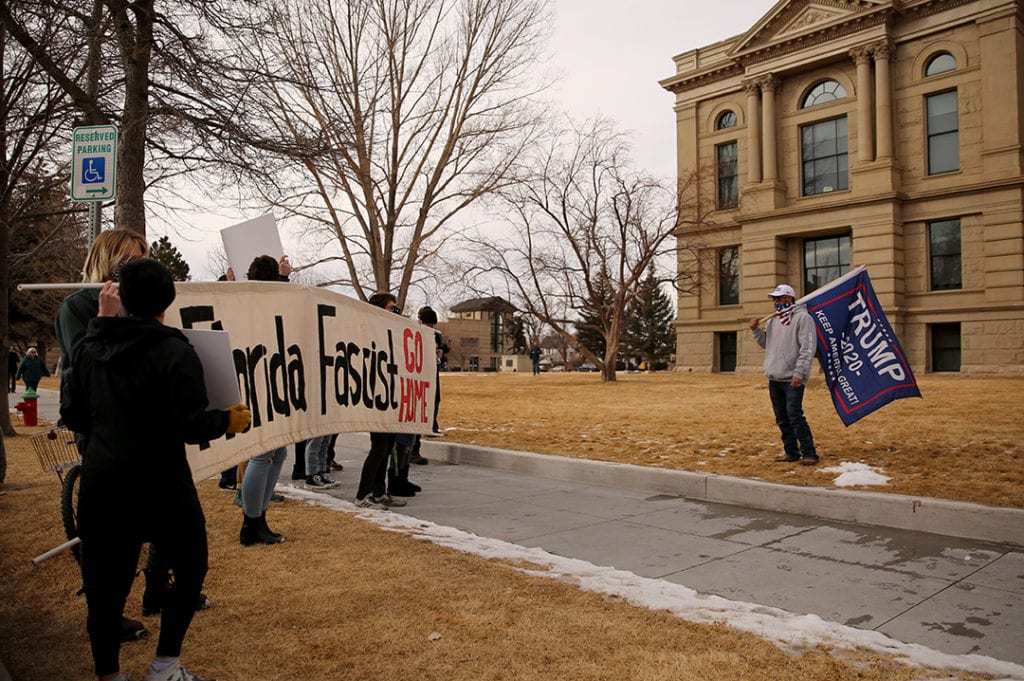 Counter-protesters stand across the sidewalk from a Trump supporter before the start of a rally for Florida Rep. Matt Gaetz on Friday, Jan. 28, 2021, in Cheyenne. (Dan Cepeda, Oil City)

Those are some of the conclusions of a new scholarly paper by researchers from the University of Wyoming (UW) and five other universities across the country. The paper appears in the Journal of Public Policy & Marketing of the American Marketing Association.

The university announced the findings of the research last week.

“I think we’re all aware of how political polarization has affected our elections and system of government, but the impacts go far beyond the political arena,” said Dave Sprott, dean of UW’s College of Business and one of the paper’s authors.

Previous research has suggested that political polarization in the U.S is more pronounced now than in the past, UW said, and that the number of people holding extreme political opinions is increasing.

Research also has shown that political identities are reinforced by people seeking out social groups and media with shared belief systems, even leading to the creation of a “group-specific shared reality,” the researchers wrote.

That challenges the creation of effective public policy, they said, due to distrust of science and the prevalence of misinformation. As a result, policy objectives diverge and opportunities for compromise decrease.

This political polarization is reflected in the marketplace, as consumers connect with brands that they perceive reflect their values and beliefs.

“Even when companies aim to be apolitical, the nation’s polarized environment increases the chances that they will be viewed as being political,” UW said.

“For example, [the researchers] noted that the expressions of support for former President Donald Trump by the CEO of Goya Beans, a Latin food company, resulted in liberal consumers boycotting the company’s products and conservatives promoting them during 2020.

“Similar situations have arisen for companies including My Pillow, Home Depot and Chick-fil-A when their corporate leaders expressed support for conservative causes.”

In the realm of personal finance, “…people may sacrifice wages, lose out on jobs, make suboptimal purchases and disregard opportunities to save,” the researchers found.

“For example, research has found that employees accept lower wages to work for politically like-minded entities, and people may select higher-priced products or ones that offer less-functional value.”

The broader negative impacts of these policy areas on society as a whole “have the potential to harm individual mental and physical health over the long term,” the researchers said.

Some remedies suggested include reducing the spread of misinformation, using messaging techniques to try to bridge the different values of liberals and conservatives, and limiting the length of political campaigns.

Still, the researchers acknowledge that some level of conflict is good and natural for society, and that polarization has been shown to increase voting and political participation.

“Future research should consider the possibility that while political polarization can be harmful, there may be silver linings and reasons for hope,” the researchers concluded.