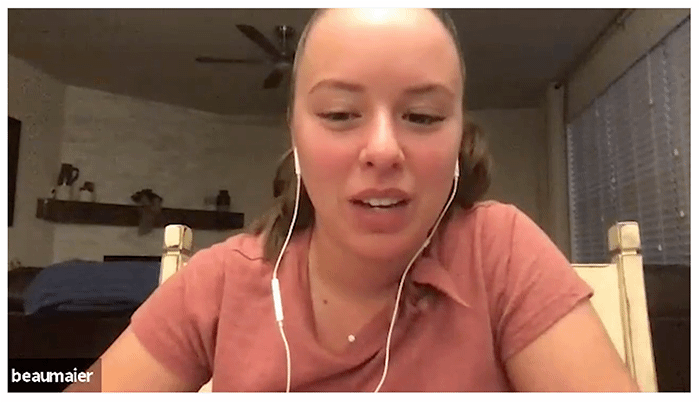 “The spies, pretending to be supporters, participated in a number of Better Wyoming activities from October 2019 – September 2020,” Better Wyoming says. “They also donated thousands of dollars to the nonprofit.”

“As the New York Times article describes, Cody native Beau Maier and his now-wife, Sofia LaRocca, were hired to infiltrate Better Wyoming for a long-term undercover operation,” Better Wyoming said. “The couple had previously worked in Washington, D.C., targeting FBI agents on behalf of the national group Project Veritas. They received training for covert operations at a ranch near Cody owned by Blackwater founder Erik Prince, where Maier’s mother works as a cook.”

Maier and LaRocca attempted to bait people associated with Better Wyoming “into making statements they could secretly record and hand over to their clients,” something Better Wyoming says “is a common tactic of Project Veritas.”

Maier posed as a military veteran suffering from post traumatic stress disorder who supported legalizing medical marijuana, according to Better Wyoming: “He infiltrated a coalition convened by Better Wyoming that advocates for cannabis reform. Members of that coalition recently launched a pair of ballot initiatives to update Wyoming’s cannabis laws.”

Maier also made two $1,000 donations to Better Wyoming, according to Friday’s release.

In 2019, LaRocca, pretending to be Sofia “Cat” Deabreu, participated in a Better Wyoming Grassroots Institute course which aimed to give Wyomingites skills to build grassroots political efforts in the state.

Maier and LaRocca both befriended Better Wyoming Executive Director Nate Martin as well as Karlee Provenza, who is now a state representative in the Wyoming Legislature representing Albany County. She is now also Martin’s wife, according to Better Wyoming.

The two couples shared several meals together, including one at the home of Martin and Provenza.

“The whole time, they were lying to my wife and me about who they were and what they were up to, and they were actively trying to get us to say or do things that could ruin our careers and hurt us,” Martin said. “Politics aside, that’s just a disgusting thing to do to other people. But, again, the people who hired them support policies that defund public schools and block folks from getting healthcare, so it’s pretty clear they don’t care much about people to begin with.”

Better Wyoming says that it is unknown what footage Maier and LaRocca captured.

“To date, none has been publicly released,” Better Wyoming says. “In February 2020, a different spy affiliated with Maier and Larocca secretly recorded Martin and another Better Wyoming staffer after an event at the Cheyenne Public Library.”

“That footage was posted on a website, WyoRinoHunters.com, which is now deleted but can be accessed via the Internet Archive’s Wayback Machine.”

Those videos accompanied an article titled “Hunting the Rino.”

“The African Rhino is a dangerous animal,” that article on the WyoRinoHunters website said. “Hunting it, even for the purpose of just taking photographs or video, requires many precautions and special techniques. It is a game of wits, patience and skill.”

“Hunting for video of the Wyoming Rino is not much different. It is an animal that says one thing during an election campaign but turns its back on supporters when casting its own vote in the Capitol. No wonder they call it a Texas heart shot.”

The article similarly talks about Wyoming Democrats in animalistic terms. It says that a Wyoming “Repblican in name only” is a “species [that] is closely related to that other dangerous creature, the WyoDem.”

“In turn, the latter are very closely related to Progressives, a devious breed that believes the end justifies the means and so are willing to say whatever it takes to achieve their socialist revolution,” the article states.

“Following in Wyoming’s long tradition, we have dusted off our camo, polished our optics and loaded up our gear,” the article states.

The article also states that the efforts to expose progressives and Wyoming “RINOs” would continue.

“We are only just getting started,” the article said. “From Jackson Hole billionaires who think Wyomingites don’t know what is good for them to speakers with forked tongues who distort budgets for pet subjects but still get poor grades, we have tags for you all. The herd is way too big for Wyoming’s Code of the West and, as God is our witness, we intend to cull it by exposing the truth with cameras that do not lie.”

“Only then might we get a chance at replacing the liberal Wyoming Republicans, the Rinos of the Month and closet Democrats with authentic Republican statesmen who will never vote for big government, big regulation or big taxation.”

Oil City attempted to reach out to the Wyoming Liberty Group on Friday to request comment on the matter. However, the phone call was not answered and the organization had not set up a voicemail box.

“The use of spies is pretty far out there, but so are many of the Wyoming Liberty Group’s ideas,” Martin said in Better Wyoming’s press release. “Wyoming’s far-right promotes tinfoil-hat conspiracy theories like Medicaid expansion causes abortion and cannabis is ruining the daycare industry. It makes sense that they would use spies to try to attack their opposition or uncover some imagined liberal plot.”