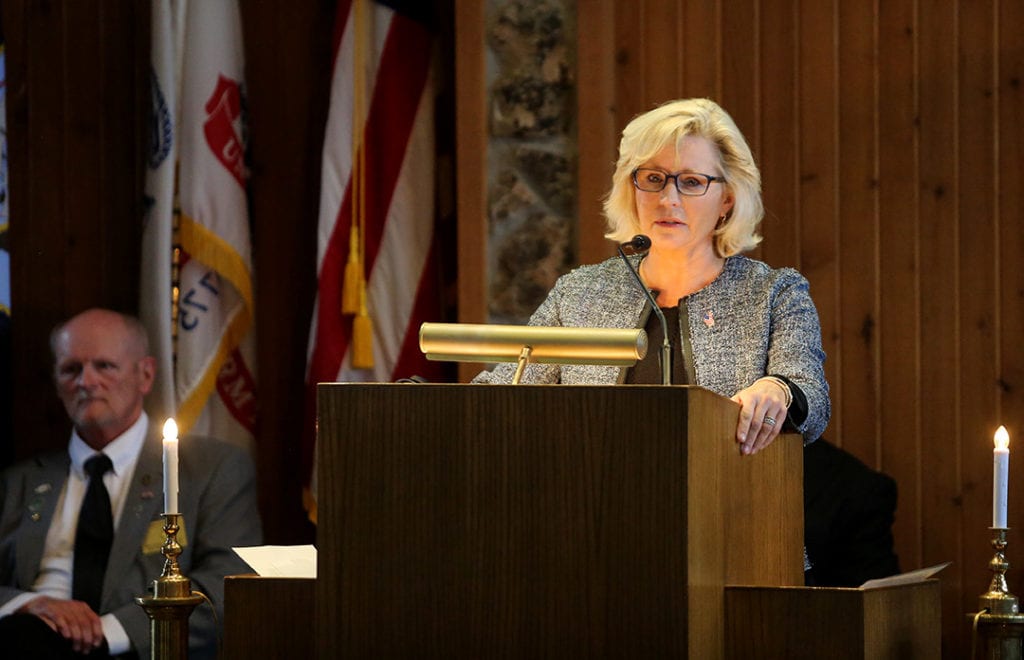 Rep. Liz Cheney talks during a Memorial Day service in the chapel at the Oregon Trail State Veterans Cemetery on Monday, May 28, 2018, in Evansville. (Dan Cepeda, Oil City File)

Wyoming Rep. Liz Cheney was one of two Republicans to vote with Democrats to censure Rep. Paul Gosar of Arizona for Tweeting a doctored animated video that depicted his character killing the likeness of a Democratic congresswoman and assaulting a likeness of President Biden.

According to the New York Times, Cheney and Rep. Adam Kinzinger of Illinois voted in favor, with one other Republican, Rep. David Joyce of Ohio, voting “present.” The total vote to censure Gosar on Wednesday was 223 to 207.

Republican Reps. Barry Loudermilk of Georgia, Scott Perry of Pennsylvania, and Morgan Griffith of Virginia did not vote, according to CNN.

The formal rebuke also stripped him of his committee assignments.

“I don’t think this should be an issue about party, about partisan politics,” Rep. Cheney said. “If a Democrat had done this, that would require censure as well.”

Oil City News reached out to Rep. Cheney’s office for comment but did not hear back on Thursday.

Rep. Alexandria Ocasio-Cortez of New York, the target of the video’s violence, addressed Republican leader Kevin McCarthy of California during the debate after he repeatedly accused Democrats of trying to silence Republicans.

The vote by Cheney comes days after the Wyoming GOP voted over the weekend to no longer recognize her as a Republican.

According to the Casper Star-Tribune, the symbolic move was passed during a meeting in Buffalo by a vote of 31 to 29. Cheney’s isolation from the Republican party, particularly in conservative Wyoming, comes after she repeatedly criticized former President Donald Trump of inciting the deadly riot on the Capitol on January 6, voting with several other Republicans to impeach him. She is now serving as vice chairwoman of the House select committee investigating the attack.