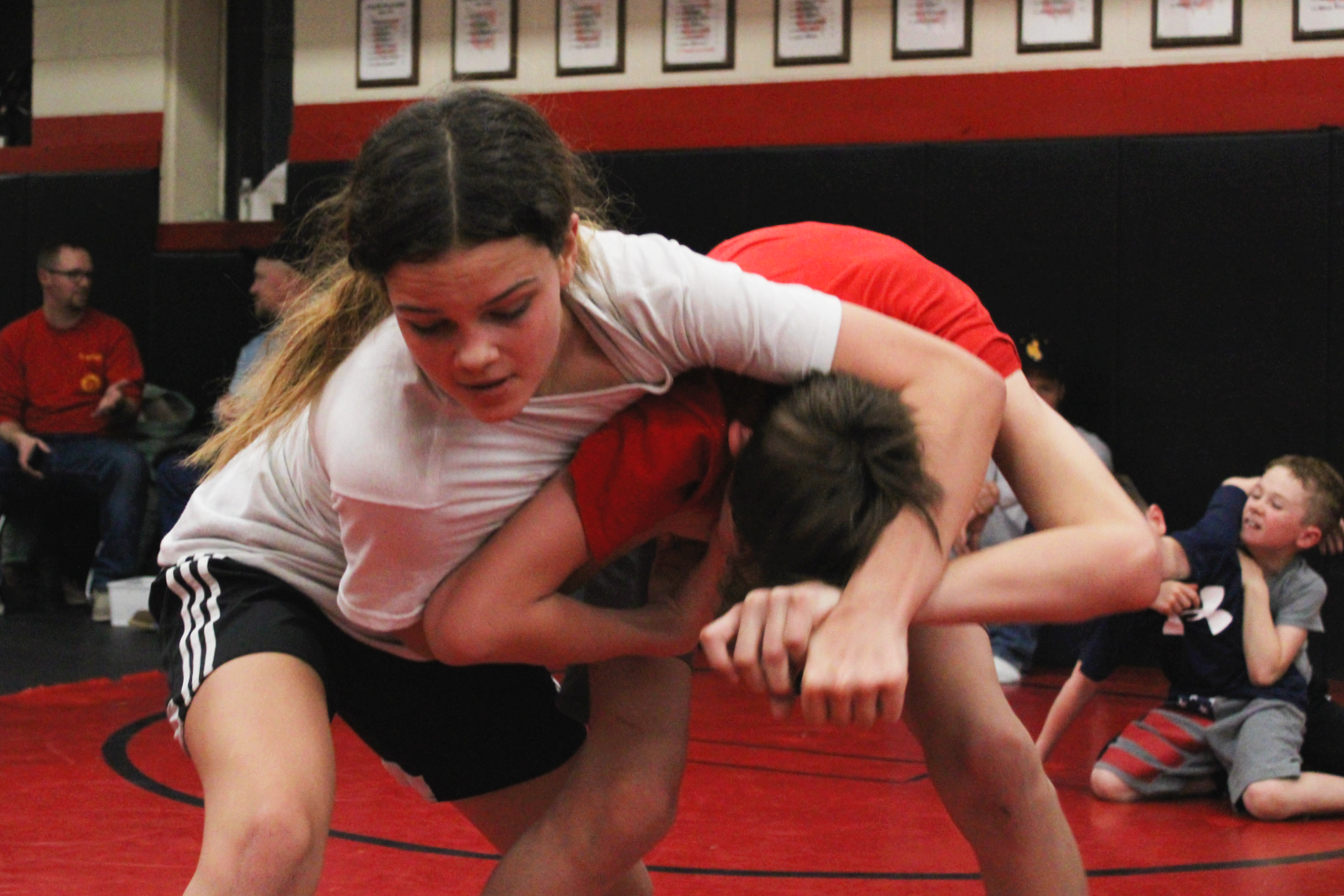 A female wrestler in Team Braves Wrestling Club grapples with a fellow wrestler in January at the Central High School wrestling room in Cheyenne. The Wyoming High School Activities Association Board of Directors approved in its meeting Wednesday to make girls wrestling a sanctioned high school sport in the state starting with the 2022-23 school year. (Briar Napier/Oil City News)

The president of the Wyoming High School Activities Association (WHSAA) Board of Directors, Larry Yeradi, figured girls wrestling as a state event was going to be a “when,” not an “if.”

And when the board officially sanctioned girls wrestling as a Wyoming high school sport Wednesday afternoon, the “when” was finally known.

With wrestling being one of the nation’s fastest-growing sports among females, Wyoming officially joined the growing selection of states that hold high school girls wrestling championships and will begin holding its own next school year. Much is unknown at the moment about how the sport will be managed — including the season schedule and exactly how many schools will have programs — but Yeradi remarked that the move was a “step forward” for high school athletics in the state.

Yeradi, a wrestling coach himself at Wright High School, had seen firsthand the need for girls wrestling grow over the years. But once the WHSAA got what he called the “magic number” of schools willing to field teams (WHSAA bylaws require at least eight commitments), he said the board found the addition to be a “no-brainer.”

“We’ve had girls wrestle in the boys division for quite some time,” Yeradi said. “We’ve had a couple of girls go on and earn some college scholarships, and colleges are starting to come on board with that. I think it’s just the evolution of female sports. Back in my day, I don’t think we had much of an interest in that, and I’m 50-plus years old. … It’s time it’s done. We needed to move forward with it, embrace it and enjoy it.”

The state championships would be held in February, Yeradi stated, the same month as the boys event that was held this past season in Casper. Whether the boys and girls championships would happen simultaneously or within a few days of each other is a logistical hurdle that needs to be figured out by a to-be-formed committee, he noted.

Though some of the bigger schools in the state may field full teams, Yeradi said that many schools will likely have individual female wrestlers go out and be able to compete for state championships on their own. He added that the WHSAA wanted to use Missouri’s recent approval of girls wrestling as a baseline for its own growth, with a hope that in Wyoming it’s fast and furious.

“When [Missouri] started — they’re a much larger state, obviously — but they started with somewhere in the neighborhood of 50 to 75 girls their inaugural year,” Yeradi remarked. “Then the very next year, they were up to over 300, 400 girls. So I think it will continue to grow, and as girls can expand their horizons and move forward, I think that it’s just going to blossom and just be a great thing for a while.”

Yeradi said that the committee will aim to design a sport blueprint in time for the beginning of next school year so that school districts can make decisions about whether or not to field teams. The questions outnumber the answers at the moment, he said, but will be figured out as time goes along.

But as the calls for the sport to be approved in the state grew, he noted, the board felt something had to be done about them. And now, for the girls that want to be state-champion wrestlers in Wyoming, they’ll be able to achieve that dream against their peers.

“Hopefully, we’ll come to some sort of consensus and decide how it’s going to look by August,” Yeradi said. “But I think it’s a huge hurdle just to have it sanctioned. We’ve gotten over that one.”