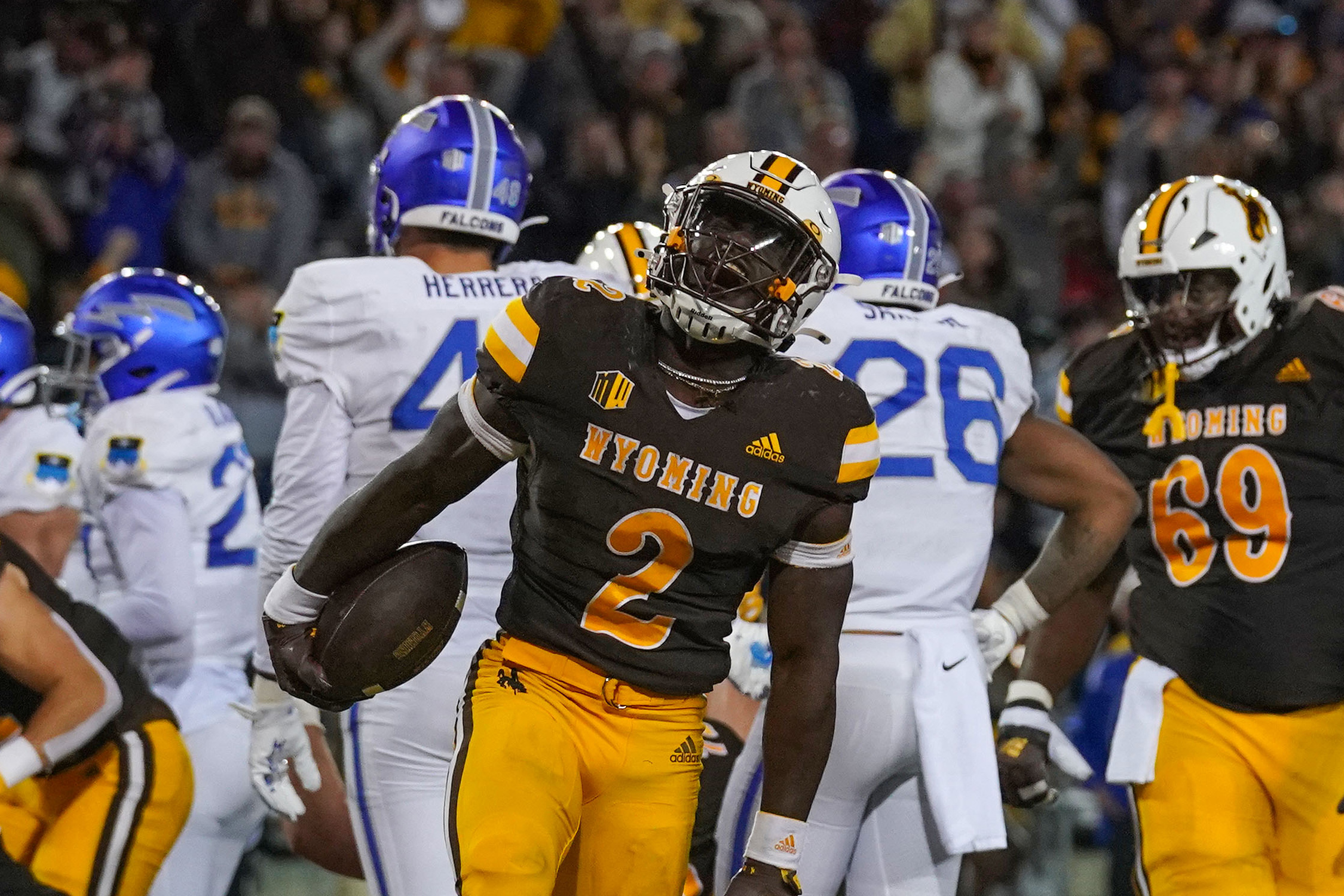 NOTE: The following is an article courtesy of University of Wyoming Athletics.

LARAMIE, Wyo. — From their first possession of Friday night’s game, the Wyoming Cowboys showed they were determined to play their best football of the season and they did just that, winning their third straight game by capturing a 17–14 win over the previously unbeaten Air Force Falcons.

With the victory, Wyoming finds itself holding the best record in the Mountain West at 3–1 overall and 1–0 in league play.

Facing an Air Force rushing attack that entered the game ranked No. 1 in the nation, averaging 508.5 yards per game, the Cowboy defense held the Falcons to 171 rushing yards, 337.5 yards under their average.

“Our guys had a great week of practice. We are an emerging football team. We are a young football team in a lot of spots, and a lot of those guys are growing up fast. I really think our coaching staff did a great job composing a game plan and the players went out and executed it.

“This team [Air Force] was scary coming in here. Air Force has good players, and at halftime we flipped the script on them.  We had [the advantage in] time of possession. We had run more plays, and I felt pretty good about that.

There were plenty of individual accolades to pass around for the Pokes. Middle linebacker and defensive captain Easton Gibbs did not start the game after suffering with flu-like symptoms Thursday night and into Friday. Although he didn’t start the game, he came in early in the first quarter and ended the day with six tackles and a tackle for a loss.

His fellow defensive captain, nose tackle Cole Godbout, led all players in the game with nine tackles, had a tackle for loss and two quarterback hurries. Redshirt freshman defensive end Braden Siders had the best game of his young career with six tackles, and defensive tackle Jordan Bertagnole also made six tackles. Redshirt freshman linebacker Read Sunn, who started in place of Gibbs, contributed four tackles against the Falcons.

Cowboy running back Titus Swen recorded his first 100-yard rushing game of the season and the fourth of his career with 102 rushing yards. Swen scored the winning touchdown with 6:06 remaining in the game on a five-yard run where he would not be stopped, forcing his way into the end zone with the help of his teammates who pushed the Air Force defense back over the goal line.

Swen also had a huge run on Wyoming’s final possession of the game. Facing a third and 13 at the Wyoming 29-yard line, Swen cut back to his right and outran the Air Force defense for a 17-yard gain and a first down. That play and a play later in the drive — when his running back mate, Dawaiian McNeely, gained three yards on a third and two at the Air Force 46 — enabled the Wyoming offense to run out the final 4 minutes and 47 seconds of the game and prevented Air Force from getting the ball back.

Quarterback Andrew Peasley played another exceptional game for the Cowboys. He completed 18 of 23 passes for a 78.3 completion percentage, 162 yards, one touchdown pass and one interception. It marked the third consecutive game this season that Peasley completed over 60% of his passes. He completed 20 of 30 passes (66.7 percent) in a win over Tulsa and 19 of 30 passes (63.3 percent) against Northern Colorado in a home victory.

It marks the first time a Cowboy quarterback has completed over 60 percent of his passes in three consecutive games since Cameron Coffman accomplished that in 2015 against Washington State, New Mexico and Appalachian State.

Wyoming played a near-perfect first half. Wyoming’s defense held Air Force to only 87 yards of total offense and only 47 rushing yards, while the Cowboy offense generated 183 total yards in the first half, including 111 rushing yards and 72 passing yards.

Wyoming took the opening kickoff and drove 73 yards in 15 plays down to the Air Force two-yard line, where on a fourth and goal Cowboy kicker John Hoyland came in and kicked a 20-yard field goal to give the Pokes a 3–0 lead with 7:28 remaining in the first quarter. For Hoyland, it was his 11th field goal in 12 attempts this season. He came into the game leading the nation in field goals made per game (3.33) and was No. 6 in the nation in scoring (12.3 points per game). Wyoming’s drive took 7:32 off the clock.

Air Force would move the ball 39 yards in 12 plays down to the Wyoming 36-yard line on its first possession, but Falcon place-kicker Matthew Dapore missed a 53-yard attempt with only 46 seconds remaining in the period. The Falcons’ drive took 6:32 and the first quarter would end with Wyoming running two plays in its second possession as the quarter ended.

Wyoming moved the ball down to the Air Force 36 as the second period began, but on the first play of the second quarter Peasley was intercepted by Falcon defensive back Trey Taylor.

Air Force and Wyoming exchanged punts on the next two possessions. The Cowboys forced Air Force into a second punt in the second quarter and a 36-yard punt by the Falcons gave the Pokes the ball at the AFA 42-yard line.

After runs of five and 23 yards by Swen, Peasley would find tight end Treyton Welch in the left corner of the end zone for a 14-yard TD pass and the Cowboys had a 10–0 lead with 7:21 remaining in the half.  That is how the half would end.

For Wyoming, it was the first time the Cowboys had shut out a team in a half since Nov. 20, 2021, when UW shut out Utah State in the second half in Logan, Utah.

The third quarter began with Air Force climbing back into the game as they engineered a 13-play, 75-yard drive on their first possession of the second half. Falcon quarterback Haaziq Daniels capped off the drive with a 9-yard TD pass to wide receiver David Cormier to pull Air Force to within three points at 10–7 at the 7:45 mark. Neither team would pose a scoring threat for the remainder of the third quarter.

Air Force started its first drive of the fourth quarter at its own 20-yard line and proceeded to move the ball down to the Wyoming 41-yard line. It was then that Daniels found wide receiver Cade Harris behind the Wyoming defense for a 41-yard TD pass and suddenly Air Force had its first lead at 14–10 with 9:58 remaining in the game.

On the very next possession, Peasley would show his leadership skills. Wyoming was at its own 26-yard line and facing a third and nine. Peasley found wide receiver Wyatt Wieland downfield on the left side for 24 yards and a first down at the 50-yard line. Peasley rushed for five yards on the next play and McNeely ran for 10 yards after that.

After a one-yard run by Swen, the Pokes were at the Air Force 34 with a second and nine. Peasley then connected with fullback/tight end Parker Christensen down the middle for 29 yards to the Air Force five.  It was there that Swen would not be denied as he and his teammates forced the Air Force defense back into the end zone for what would be the winning touchdown and give UW a 17–10 lead with 6:06 remaining.

The Falcons gained one first down on what would be their last possession before the Cowboy defense forced them to punt on a fourth and seven.

The Cowboy offense possessed the ball for the final 4:47, driving 30 yards in 11 plays to run out the clock.

Friday’s game was the 60th time the Cowboys and Falcons met on a football field. The series dates back to Nov. 2, 1957, when the two teams played each other for the first time in Laramie. That game ended in a 7–7 tie. With its win on Friday night, the Cowboys now have won 27 games in the series to Air Force’s 30 wins. There have been three ties.

Next Up: The Wyoming Cowboys will be playing an old rival next week when they travel to Provo, Utah, to face the BYU Cougars on Saturday, Sept. 24. That game is scheduled to kick off at 8:15 p.m. and be televised on either ESPN or ESPN2. The announcement of the specific television network will be made early next week.

The last time the two rivals played was in the 2016 San Diego County Credit Union Poinsettia Bowl. BYU won that hard-fought game by a score of 24–21. Next week’s game will mark the 79th meeting between the two schools.