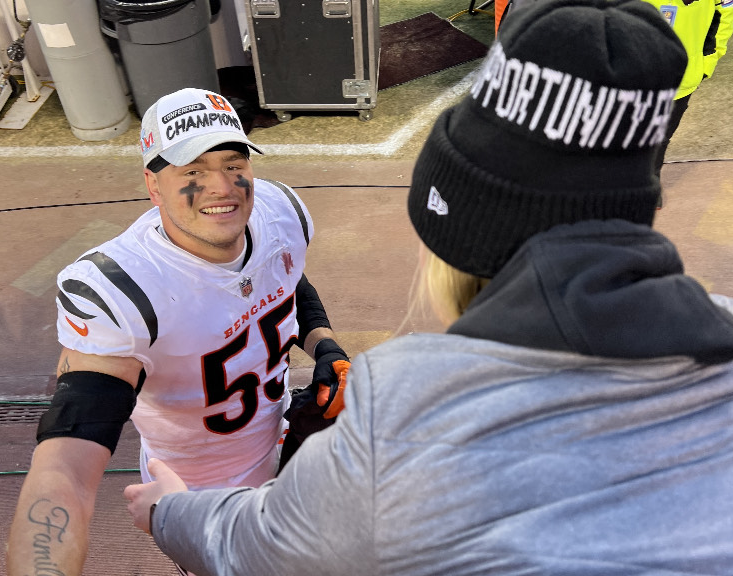 Former University of Wyoming and Natrona County football player Logan Wilson smiles for a picture after his Cincinnati Bengals beat the Kansas City Chiefs on Jan. 30, 2022 in overtime in the AFC Championship Game in Kansas City, Missouri. Wilson and the Bengals will be facing off against the Chiefs again on Sunday. (Courtesy of Trevor Wilson)

CASPER, Wyo. — Logan Wilson, linebacker for the NFL’s Cincinnati Bengals, will be donating one of his jerseys to the Boys & Girls Clubs of Central Wyoming’s annual Reverse Raffle and Auction.

Wilson will first wear the jersey when the Bengals face the Kansas City Chiefs on Sunday, Dec. 4. After the game, Wilson will sign it and donate it to the BGCCW, said Ashley Bright, CEO of the BGCCW, on Friday.

The jersey will be one of the Bengals’ all-orange jerseys, Bright said. It will then be available at the BGCCW Reverse Raffle and Auction, which will happen at 5 p.m. Saturday, Feb. 4 at the Ford Wyoming Center, 1 Events Drive in Casper.

Two-time World Series Champion Mike Deveraux will be back in his hometown of Casper for the BGCCW Reverse Raffle and Auction as the keynote speaker, according to the BGCCW.