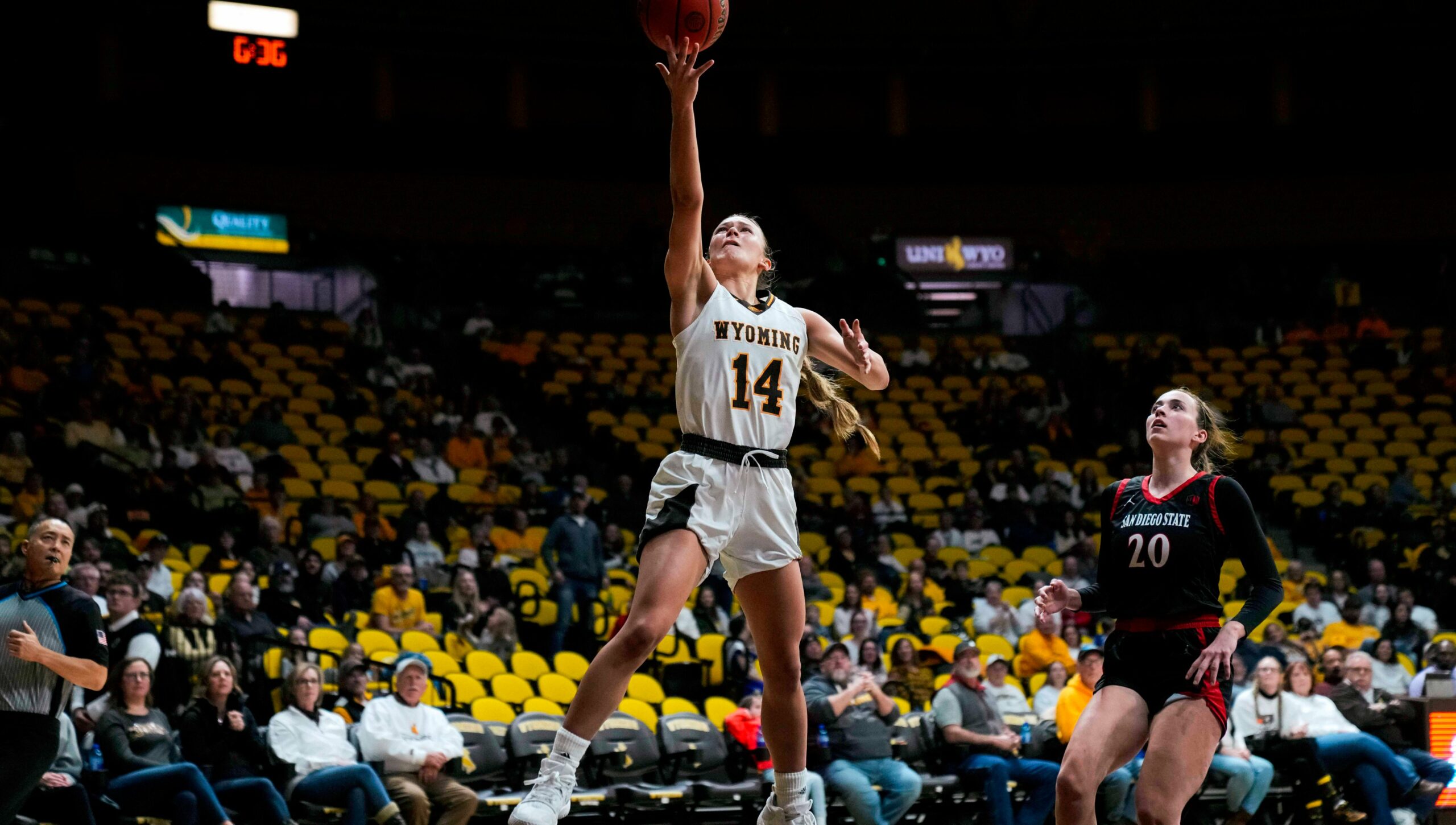 LARAMIE, Wyo. — A slow start to open both halves of play proved fatal for the Wyoming Cowgirls on Saturday night, as San Diego State held them off 73–66 in Laramie.

San Diego State jumped out to an early 8–1 lead as the Cowgirls started 0-for-8 from the floor. The Aztecs led 8–3 at the first media timeout, as a Quinn Weidemann layup finally lifted the lid for Wyoming. Out of the timeout, the Cowgirls continued to struggle on the offensive end and called a timeout with two minutes to go in the quarter, trailing 14–5 after back-to-back 3-pointers from SDSU.

The Aztecs went on to extend the lead to 19–9 by the end of the opening period.

The second quarter began the same as the first, as San Diego State continued to hit shots while the Cowgirls couldn’t find a rhythm. The Aztecs pushed their lead to 24–11 with eight minutes left in the half. Wyoming would respond, though, scoring seven straight, leading to an SDSU timeout with about six minutes to go before halftime.

Following the timeout, the two teams would start trading baskets before back-to-back layups from the Cowgirls got them to within 30–28 with under two minutes to go in the half. Going into the break, UW trailed by just three.

Wyoming ended the half on a bit of a hot streak, making its final five shots. SDSU shot phenomenally in the first half, hitting 14-for-30 from the floor and 4-of-8 from 3-point range.

In the third, the Cowgirls got the first hoop, but the Aztecs would go on a run from there, scoring 10 straight to push the lead up to double digits again, forcing the Cowgirls to call timeout down 44–33.

The timeout didn’t seem to do much to enliven the Cowgirls or slow the Aztecs, though, as the run continued for San Diego State. Following the timeout, SDSU extended the lead up to 50–35.

Wyoming managed to reel the deficit back in to 50–42 with roughly two minutes left in the quarter, before San Diego State ended the quarter with a 6–0 run, taking a 56–42 lead into the final quarter.

Wyoming started the fourth with a 6–2 run, forcing an SDSU timeout with the score at 58–48.

The Cowgirls twice cut their deficit to within five points, but lost their momentum thanks to a three-minute scoring drought that was finally halted when Weidemann nailed a corner 3-pointer to bring the score to 66–62 with less than 30 seconds remaining. After that, San Diego State managed to seal the game at the line.

The Cowgirls ended up shooting a better percentage from the floor on the night, shooting at a 48.2% clip, as opposed to SDSU’s 45.5%. The difference, however, was that the Aztecs went 5-for-10 from 3-point range and made 18-of-19 free throws. Wyoming, meanwhile, went just 3-for-13 from range and 9-of-15 at the charity stripe.

Weidemann led all scorers with 19 on the night, hitting eight of her 14 shots. Allyson Fertig ended up with 15 points and eight rebounds, while Emily Mellema added 11 and three assists off the bench. It marked the third time in the last four games that Mellema has scored in double figures. Also off the bench, Marta Savic provided a spark with six points, three boards and three assists in 16 minutes of action.

“I said it Thursday, we’re not a double-digit-points-from-behind type of team,” associate head coach Ryan Larsen said. “I’m not sure what our issues are in the first and third quarters right now. We’re capable of more; we have not performed the last two games up to our capabilities. It’s a lot of simple things to correct.”