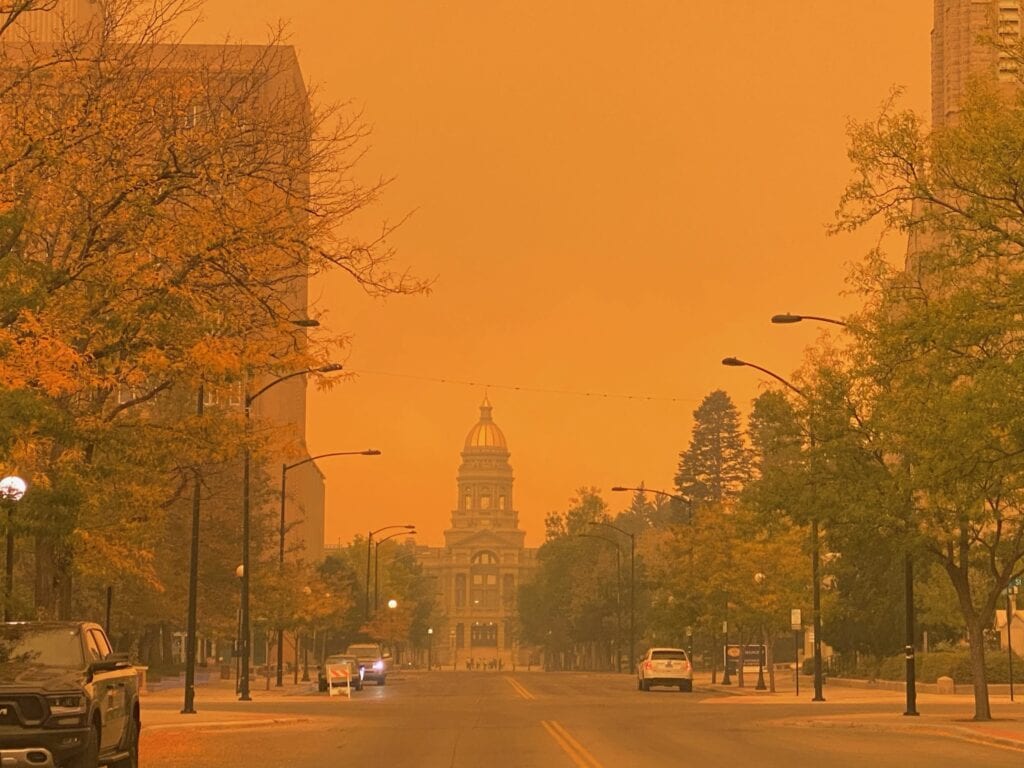 CASPER, Wyo. — Wyoming Governor Mark Gordon said during a Monday, Oct. 5 press conference that “we have got to embrace that we have got to do a better job of managing our forests.”

Gordon’s comments came as the Mullen Fire, which started on Sept. 17 in the Medicine Bow National Forest, has burned about 150,000 acres and has claimed 29 homes and 31 additional structures.

Gordon said that firefighting efforts on the Mullen Fire show that logging and activity from previous fires can help limit the spread of fires.

“It is clear that we are making progress in places where there has been logging that has happened or where there has been some burnout activity before,” he said. “This is just something that is valuable in getting a mosaic in the forests that we don’t end up with an even-aged decadent stand the way we have seen in the Medicine Bow Forest.”

Gordon said he acknowledges that climate change has contributed to severe wildfires.

The U.S. Forest Service said in 2019 that at least 41.7 million acres of forest in the western United States had been victim to bark beetle mortality.

“During the past decade in the west, tree mortality caused by bark beetles has increased in spruce, lodgepole, pinyon-juniper, and ponderosa forests,” the Forest Service says. “This increase is correlated with shifts in temperature and increased water stress, which create conditions within trees that are favorable to beetle survival and growth. A synthesis of climate change effects on native bark beetles, important mortality agents of conifers in western North America, is available at Climate Change and Bark Beetles of the Western United States and Canada.”

Gordon said that carbon capture combined with forest management could help reduce the severity of fires and reduce carbon emissions.

“It is also true that climate change is certainly a contributor to all of these factors, which is the reason why Wyoming has taken a leadership position in saying, ‘Look, if we can do something with managing our forests, being able to pelletize or brick those standing dead forests, we can incorporate that in a carbon capture and sequestration program which will take carbon dioxide out of the atmosphere,'” Gordon said. “Taking it out of the atmosphere as opposed to just reducing the amount of emissions that we have.”

“Better forest management can lead to a reduced carbon footprint in the atmosphere and that is something that Wyoming is pursuing on all fronts.”

Gordon said that dead standing trees slowly oxidize and decompose even without wildfires accelerating the process.

“They are a carbon source in and of themselves, just not as rapid as what we are seeing on the Mullen Fire,” he said.

The governor added that the Mullen Fire may have impacted some in the logging industry.

“There has been economic harm done to some of our loggers who had maybe sales that are now being affected by that fire,” he said.

Gordon said that he thinks may people living in forested areas have “taken a defensive posture” by tree thinning near their properties.

“That’s all really good to do,” he said.

“When you have a 60 mph wind and an ember wash that is a mile and a half beyond the perimeter of the fire….you can see that a defensible perimeter can get very, very large,” Gordon said.