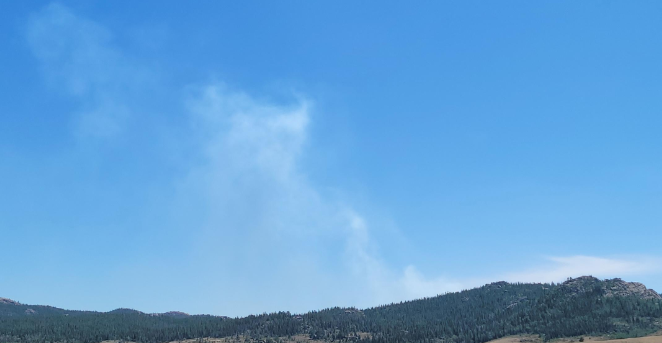 CASPER, Wyo. — Containment of the Sugarloaf Fire burning near Laramie Peak has increased to 31%, fire managers said in an update posted to InciWeb on Friday.

The fire is listed at 839 acres with 277 personnel assigned to help fight it. The fire area is likely to receive some rain on Friday and Saturday.

“A surge of monsoonal moisture will bring scattered to numerous showers and thunderstorms to the area this afternoon and evening,” the update posted to InciWeb said. “Scattered showers are likely to continue through Saturday with conditions drying back out by early next week. With the cloud cover and showers around, temperatures will be cooler this weekend.”

Fire behavior on Friday is expected to include primarily backing and creeping fire in unburned areas inside the perimeter. Some single-tree torching is possible.

Crew are working to patrol and mop up in the Alpha and Zulu divisions of the fire, the update said.

All evacuation and pre-evacuation notices related to the Sugarloaf Fire were lifted on Wednesday.

Stage 1 Fire Restrictions remain in effect for the Laramie Peak unit of the Medicine Bow National Forest and the Thunder Basin National Grassland, with information available from the U.S. Forest Service.

A temporary flight restriction prohibiting aircraft and drones from entering the fire area without special permission remains in effect.

“Please remember: If you fly, we can’t!,” fire managers said.

The fire was first discovered on Monday, July 25 and it is thought to have been human-caused.

“Anyone with information on how the fire started can call the Forest Service Law Enforcement Tip Line, 303-275-5266,” the Sugarloaf fire information page on InciWeb states.

The Rocky Mountain Complex Incident Management Team Three is in command of the fire.