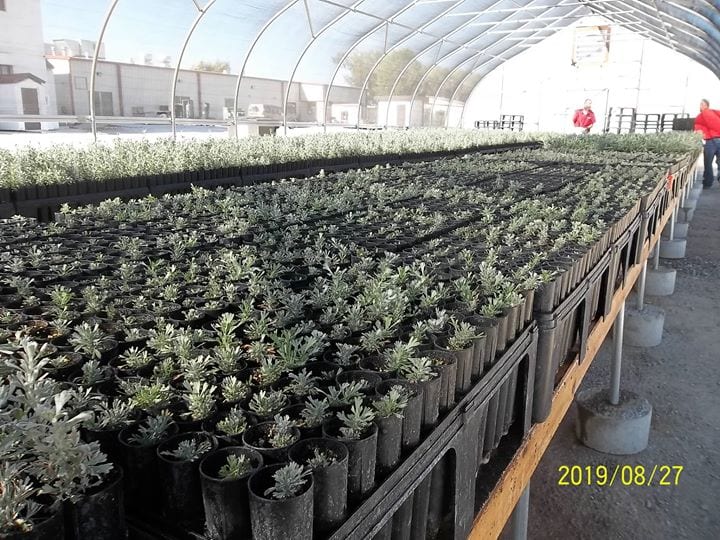 CASPER, Wyo. — Inmates at the Wyoming Honor Farm are utilizing a new greenhouse in Riverton to grow sagebrush seedlings.

The seedlings will be used to help “restore the fractured sagebrush steppe ecosystem across the U.S. West,” the Wyoming Bureau of Land Management said Wednesday via Facebook.

“The inmates grew about 26,000 seedlings of various types of sagebrush for the Abandoned Mine Lands Native Plants Project,” Wyoming BLM adds.

Lander Middle School students will plant the seedlings on Nov. 5 and 7.

The Wyoming Honor Farm is a minimum security corrections facility, and Kristine Galloway with the Wyoming Department of Environmental Quality says the greenhouse was set up in June.

The project is a collaboration between the Wyoming Honor Farm, Wyoming BLM and Wyoming DEQ.

“Gina Clingerman, the archeologist and project manager for the BLM’s Abandoned Mine Lands program in Wyoming, said they originally obtained seeds for this project from the BLM’s Seeds of Success program,” Galloway explains. “Through that program, botanists collect more than 10,000 seeds in Wyoming for a seed bank and use the rest for research, reclamation and habitat restoration projects.”

Three inmates work full time in the greenhouse, which also gives them skills for once they leave the correctional facility.

“Michael Catt, the inmate in charge of the greenhouse, said he and his coworkers, Drew Moore and Christopher Eagle Road, work in the greenhouse from 8 a.m. to 4 p.m. every day with an hour break for lunch,” Galloway adds. “They return from 6-7 p.m. to water the seedlings.”

She shared what these individuals say they have learned from the program:

Catt said the work has been humbling for him, and he added that he might be interested in teaching a similar program in prisons someday.

Moore said he might be able to use the skills to work in a garden center someday. Not only that, but he spoke of starting a garden as a way to reconnect with his daughters after his release.

Eagle Road said he likes that the program offers him economic opportunities and lets him benefit the environment, which is especially important to him as a Native American.

Such work programs tend to reduce recidivism among released inmates.

“Steve Lindly, deputy director of the Wyoming Department of Corrections said the project directly supports the agency’s mission, part of which is to help inmates become law-abiding citizens when they leave to re-enter society, including teaching them the tools and resources to help them be successful,” Galloway writes.

“’This program may eventually lead to some type of certification, which could allow involved inmates to potentially do something related on the outside,’ Lindly said.”