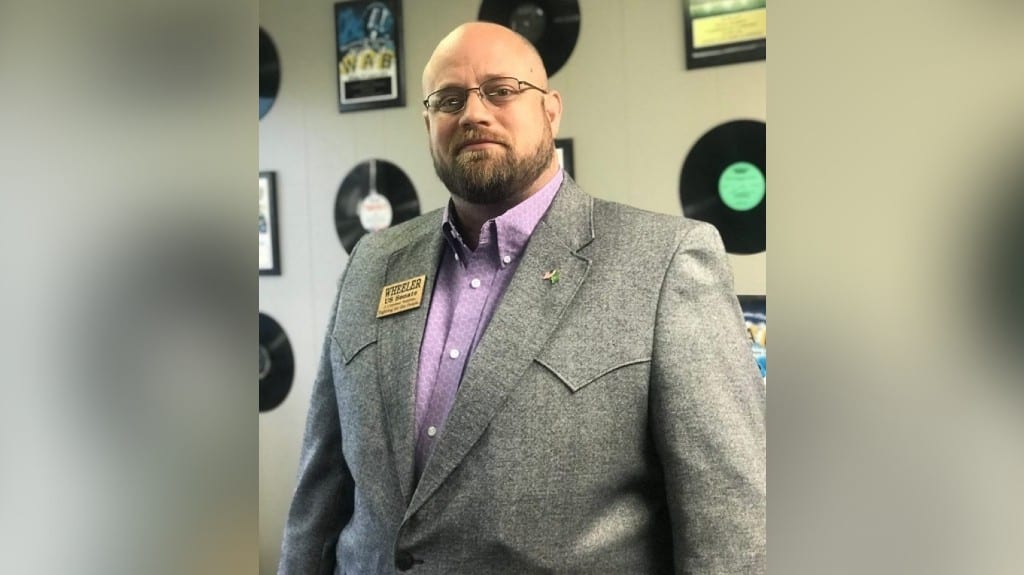 He now hopes to serve in another capacity. Wheeler, a Republican, is running for Wyoming’s United States Senate seat currently occupied by Senator Mike Enzi.

Enzi doesn’t plan to run for re-election, but Wheeler says he was planning to run even if Enzi had kept his name in the bucket.

He says he initially announced his candidacy in December 2018.

Wheeler says his top priorities should he be selected are:

He says that protecting Americans’ rights to bear arms would be higher on the list if he thought that those were at serious risk of being undermined.

But Wheeler says he thinks the 2nd Amendment has a firm foothold legally and among enough politicians that he sees the other issues as more pressing.

“I don’t see Congress as coming together for a full-on 2nd Amendment abolishment,” Wheeler says. “If that changes, so will I.”

During his first deployment to Iraq, Wheeler says he sustained an injury to his neck. He nevertheless committed to a second deployment, but a back injury cut that deployment short.

“It was devastating to inure my back and get sent home,” he said on Wednesday, Oct. 16.

Since then, he has had multiple surgeries on his back and has had to deal extensively with the VA.

That experience with the VA highlighted a set of problems that he hopes to address.

“We need to cut down on the bureaucracy,” Wheeler says. “Vets are waiting too long for claims to be accepted.”

In his own case, Wheeler says that while he was waiting for a surgery, the VA told him he couldn’t work.

While the VA initially had him on 100% disability coverage for the first six months he was waiting for his surgery, after six months his coverage was lowered from about $2,300 a month to $700 a month, despite Wheeler still waiting for the surgery.

“It turned into losing everything I had,” he says. “The only thing I had left was my vehicle.”

Overall, he says he waited 14 months before finally getting the medical attention he required.

Since that time, he’s also spoken with fellow veterans and began to perceive other problems with the VA.

He says setting up medical appointments at the Sheridan VA Medical Center can take multiple phone calls and could easily be streamlined.

Wheeler also takes issue with how the VA’s budget is handled. He says that local VA centers are told to spend any funding they have leftover prior to the end of the fiscal year rather than holding on to the funding for a purpose that is really needed.

While his military background plays a big role in his decision to run for the Senate, Wheeler’s mom also inspired him.

He says his mother grew tired of hearing people complain about things and never doing something to effect change. She decided to run for a city council seat and won.

“She stuck to her guns on the things she wanted to fix,” Wheeler says.

He found himself in a similar situation and “decided it’s time for me to put my hands-on.”

Wheeler says he helped on Foster Friess’s campaign to become Wyoming’s governor and says he learned from that experience.

He says that Friess began his campaign with a strong focus on calling for transparency. But as the campaign went on, Wheeler says he thinks Friess had to adapt a lot of things on the go.

“I didn’t want to get blind-sided like that so I started in December,” Wheeler says.

He said putting his name in early gave him a better shot to get a grasp on all the issues.

“We need to cut back on government aid to other countries,” Wheeler says. “Take care of your own household first.”

He says that when there is surplus funding, he is okay with providing it to other countries if it is used wisely and acts to enhance their independence.

Only programs which will pay back for themselves in the long run are worth it.

Wheeler says he’s pledged to not vote for any tax raises.

On his campaign website, Wheeler has also signed a pledge to 100% support the Wyoming Republican Party Platform.

While he supports President Donald Trump on things like bringing a wall to the southern border with Mexico, Wheeler says he has some disagreements with Trump.

“People shouldn’t give him a pass on guns just because they like the other things he has done,” Wheeler says.

Wheeler is opposed to the idea of gun-free zones and says that banning things like bump-stocks is a bad move.

He adds that teachers should be able to arm themselves if they want to. Wheeler also suggests protecting schools with armed American combat veterans.

He says the idea is to have them patrol hallways while students are in classes. He says they could dip out into a room away from the students between classes so that their presence doesn’t disturb the school day.

Wheeler is not afraid to speak his mind, but he also thinks people on both sides of the political aisle need to work together.

“Politicians don’t like to rock the boat,” he says. “I’ll rock it so hard I might shake myself off of it.”

But he says cooperating is also crucial.

“[U.S. Congress members’] job is to come together as one and find a solution,” Wheeler says.

He’s got an idea he calls a Social Security Endowment Plan.

“Once everybody’s money is in one pot, the principal will never be touched,” Wheeler says.

Interest on a large national pool of money would grow and eventually provide money for people after they retire.

He says his plan wouldn’t benefit anyone near retirement age now.

“The new system would be for kids growing up now,” he says.

He says that the current Social Security system “even now…doesn’t pay that much.”

Wheeler thinks his plan would eventually be able to make substantial payments to people and would be sustainable over the long-term.

Wheeler says he is opposed to career politicians, though he respects some things Enzi has done during his tenure.

“He did some good things in office,” Wheeler says.

His words are more pointed when it comes to one of his opponents in the race, Republican Cynthia Lummis.

“What did she do for eight years?” Wheeler asks.

He says he’d get things done, be more accessible to constituents than current Wyoming politicians in Washington D.C. and would stand up for what he thinks is right.

“We need new blood and people who will talk to each other,” Wheeler says.