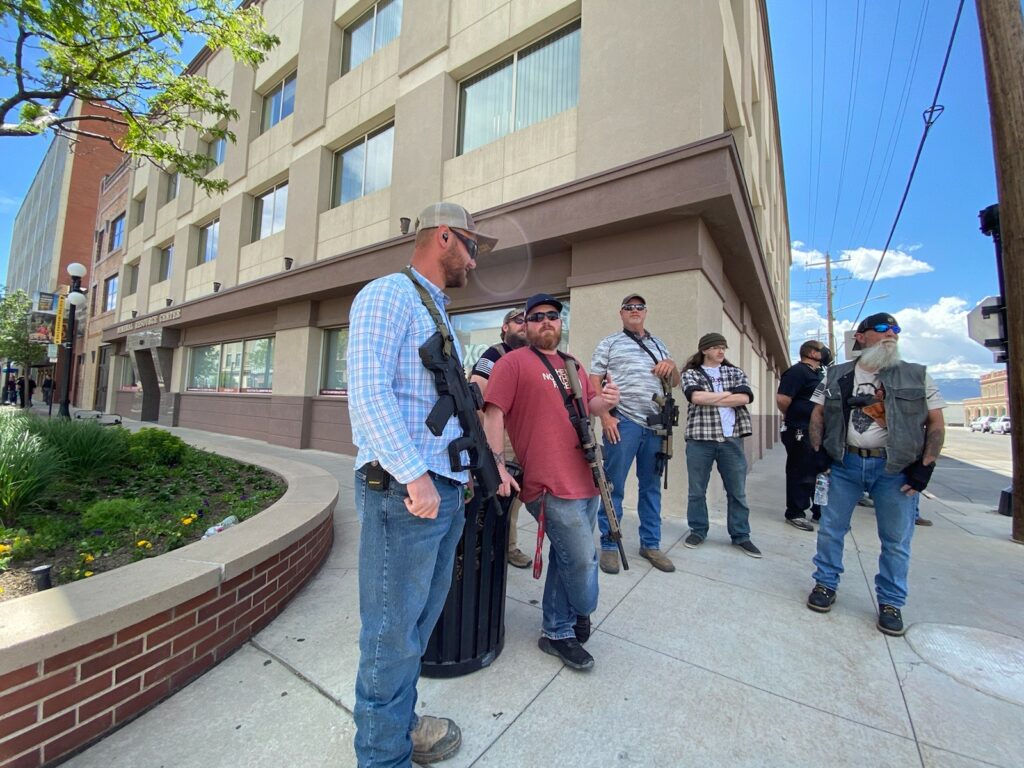 This man on the left seen in blue identified himself as "Duncan Lemp." Casper Youth for Change have asked for an investigation into whether he used the name falsely. (Oil City staff)

CASPER, Wyo. — A man carrying a Tavor 5.56 semi-automatic bullpup rifle before a march began on Wednesday, June 3 in downtown Casper told reporters that his name was Duncan Lemp and that the armed citizens were there to ensure the protest stayed safe and said they supported demonstrators right to protest.

The Casper Youth for Change say that the man may have used a false name and are calling for an investigation into the matter.

“A man in this article has identified himself as one Duncan Lemp,” Charli Asti with Casper Youth for Change said, pointing to this Oil City article. “We are unsure if this is his real name; however, we do know that Duncan Lemp is the name of an infamous member of the far-right military group known as The Three Percenters. We deeply hope that the man in the article was not signaling affiliation with the man who sought ‘war against the government or liberals.'”

The man who identified himself as Duncan Lemp did not provide contact information to Oil City reporters. While citizens are not required to provide their names to reporters, Oil City has edited our original article to note that the man’s name has not been verified beyond what he told reporters.

ABC News report that a 21 year old man named Duncan Socrates Lemp was shot and killed by police at his home in Montgomery County, Maryland on March 12, 2020.

The Daily Beast report that Lemp was a right wing activist and that his named has been adopted as a mascot of anti-lockdown protesters.

“Lemp’s name has been used as an alias by anti-lockdown activists in Wisconsin, Nebraska, Tennessee, Michigan, North Carolina, Indiana, and Nevada,” the Daily Beast reported. “He’s been cited by those protesting business closures, and even one man said he was inspired by Lemp to allegedly go out hunting for police officers in a foiled attempt at a revenge killing.”

Oil City will continue to look into the matter of the identity of the armed citizen who said his name was Duncan Lemp and will provide updates as those become available.

Aste of Casper Youth for Change said that they have “repeatedly asked that militant members of any organization do not attend our rallies.”

“We are calling for an immediate investigation into the matter, and ask that any authority able to gather information on the identity of this individual do so swiftly,” Aste added. “This poses a serious threat to the safety of Casper.”

“We hope that this is just a misunderstanding. But we cannot stand idly by in case the threat turns out to be true.”

Casper Youth for Change added that their participation in Wednesday’s march concluded at 12:55 pm and that they are unaffiliated with anyone who continued to march into the afternoon.

“As protests have reignited downtown, we beg each of you to be safe and protect one another,” Aste said. “Moving into the future, members of militant groups like The Three Percenters could pose a serious threat to the safety of all social movements.”

The Casper Youth for Change also issued this statement after they had concluded their participation in the march:

**EDIT** We have word that there are some protesters still downtown. Our protest finished around 12:55 PM MDT. We have no affiliation with these folks. We do support their right to continue protesting if things remain calm and peaceful.

We’re so happy that today’s protest went well and remained peaceful. We’d like to thank everyone for their participation: the protesters who remained peaceful, the officers who protected us, and the community members of Casper. We realize some of you may have been concerned about property. We are proud to have carried out yet another protest that went smoothly and peacefully.

With that being said, while the CYFC supports free speech for all youth, there were a few overly political comments made, including someone saying “F— Donald Trump”. The CYFC is a member of the Wyoming Association of Activists and has a commitment to nonpartisan organization and activism. Thus, understand that we cannot stand behind all comments made at the protest today.

The CYFC will continue on our mission to empower youth voices in Casper through nonpartisan, peaceful activism. If you are a youth (13-25) in the Casper area (including Mills, Evansville, Bar Nunn, Casper Mountain, etc.) and would like to join, please join the group attached to our Facebook page.

We hope the rest of everyone’s day and week is amazing and encourage you to attend the march put on by the SCLC. Thank you, Casper.