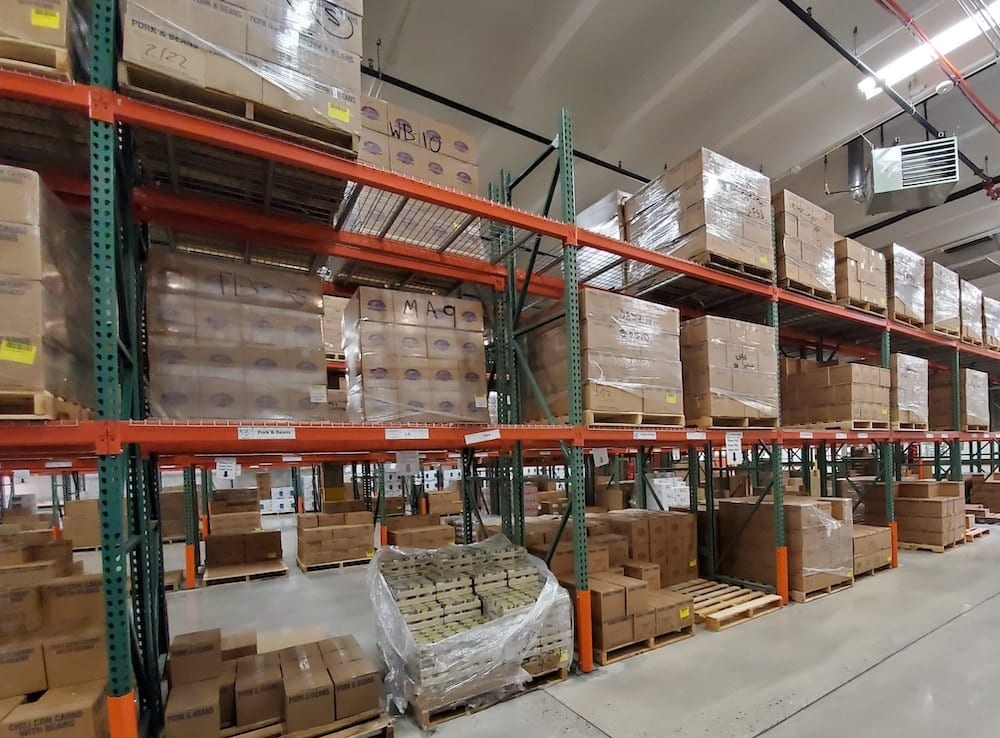 A warehouse on Welfare Square in Salt Lake City where the Church of Jesus Christ of Latter-day Saints headquarters its Food Distribution Center. (Carey Hamilton/Black 14, WyoFile)

The University of Wyoming’s famous 1969 Black 14 football players are teaming with historic adversaries to deliver up to 180 tons of food to fight hunger in vulnerable communities in the coming weeks.

The Black 14’s “Mind, Body and Soul” initiative plans to dispatch tractor trailers, each loaded with 40,000 pounds of food, to nine communities identified by active Black 14 players, member John Griffin said Thursday. With the help of UW’s diversity program and the Church of Jesus Christ of Latter-day Saints, the former players seek to feed hungry students in needy neighborhoods of their choosing.

Wyoming will get two truckloads, Griffin said, one delivered to Ethete on the Wind River Indian Reservation and the other split between the Cathedral Home for Children located in Laramie and the UW student food pantry.

The Black 14 thought of the idea when members were invited to a “welcome home” reunion at UW last year. There, they pressed forward with their resolution to not let 1969 define them and launched initiatives, including the Black 14 Social Justice Institute, initially scheduled for summer 2020 at UW but cancelled because of the pandemic.

The former players saw food insecurity in their communities exacerbated by the pandemic, Griffin said, and recognized it as a threat to young peoples’ present and future wellbeing. Put simply, kids don’t do well in class if they are hungry.

“We as a group decided we need to do something,” Griffin said.

The work entailed engaging former adversaries. UW, the Black 14 and the LDS church, once at loggerheads, are now united in “something pretty special,” Griffin said.

“We never would have guessed this would have happened,” he said of the collaboration.

UW’s head football coach in 1969 dismissed the Black 14 from the team after they sought a meeting with him to talk about protesting an upcoming game with Brigham Young University. Students and football fans at that flagship school of the LDS church had racially taunted Black Wyoming players in a game in Utah the year before.

UW Coach Lloyd Eaton did no better, and perhaps worse. He berated the Black 14 at the meeting where he dismissed them, and “he might as well have used the N-word,” McGee said.

To heal wounds, the university last year feted the Black 14 with a welcome home ceremony. With the university’s Office of Diversity, Equity and Inclusion, the group was set to launch the first Black 14 Social Justice Summer Institute at the school in the summer of 2020.

The week-long session would introduce a group of high school students to college  by having them use the Black 14’s experience to examine social issues and prepare for higher education. Dr. Emily Monago, UW’s chief diversity officer, connected with the Black 14 as members discussed other potential programs, some of the players said.

During those discussions, the Black 14 agreed on the philosophy that mind, body and soul were equally important in advancing students, leading them to the food initiative.

“We realized there were certain high school kids, junior high school kids that did not have the food they needed to learn properly,” said Mel Hamilton, one of the Black 14.

“How do we get food” was unresolved, Hamilton said.  “Who do we have to partner with? How much money can we make selling Black 14 T-shirts?”

At the University’s welcome home celebration last year, Hamilton, who had been reaching out to the church for years, met some more members of the church whose policies he had once protested. He called the small cohort of elders and brothers and wives “an incredible group.”

“It was like a light bulb turned on,” Hamilton said, “instant friendship, instant love.”

Hamilton’s problem with Brigham Young had never been taunting or epithets. He played against the school before the ugly 1968 game and before spending 18 months in the Army. But, “there was no animosity at that time” against Black players, he said.

“I was very adamant [in 1969] that our protest had nothing to do with people, personalities,” Hamilton told WyoFile of the fracas with Eaton, UW and BYU. “It had everything to do with the written policy of the church that we disagreed with. That tenet was [that] a black person could not attain the priesthood in the Mormon Church.”

Raised a Catholic, the former altar boy “never looked at a LDS person during that time with anger,” Hamilton said.

He couldn’t make progress, however because of the animosity of the time. “My hands were not recognized as a hand of friendship,” he said.

When a revelation in 1978 allowed the church to reverse its doctrine regarding Black priests, Hamilton had a mission. It was to bond with the church that was at the root of so much disruption in Laramie more than 50 years ago.

He began his outreach in 1980, he said. But it wasn’t until he made new LDS connections last year in Laramie that big wheels started turning. Church hierarchy invited Hamilton to Salt Lake City and the church’s food distribution center.

Three church apostles met him, dubbed him “the bridge builder” and showed him around.

“The food was good,” Hamilton said. “They gave us samples. It was just as good as you would buy.”

The church would be able to supply and distribute half a million dollars of non-perishable items.

“They do it all the time,” Hamilton said. “They just need a good cause.”

The Black 14 have determined the destination of four and a half truckloads of food. They’re hoping to choose two more destinations soon, then later maybe add more until they reach nine.

Griffin saw the pandemic’s economic impacts hit hard in Denver, where he lives. He will send his load to Catholic Charities in that city.

For Hamilton, whose mother shipped him off to Boys Town, a school in Nebraska for troubled boys, as a teenager to keep him out of trouble, three recipients were a no-brainer. Those who help endangered youth were a priority.

“The first thing that popped into my head was Cathedral home,” a Laramie institution for troubled youths, he said. Monago with the diversity program mentioned the UW student pantry that popped up during the pandemic, so it will get a split of that semi-load.

The Wind River Indian Reservation is “close to my heart,” Hamilton said. Deliveries should arrive the first week in November, before Thanksgiving.

Every pallet of food will bear a logo or stamp: “University of Wyoming Black 14; Mind, Body and Soul Initiative; Donation in partnership with The Church of Jesus Christ of Latter-day Saints.”

Next up, getting the UW and BYU logos on the Black 14 T-shirts and other gear.

If that happens, “people who do remember the BYU-University of Wyoming rift, now they will also remember it was repaired,” Hamilton said.

The food deliveries illustrate flexibility, Griffin said. The Black 14 can shift its offense, call a play at the line.

“We’re a bunch of old football players [and we] we still feel that we need to be relevant,” he said. “We want to be relevant partners with the University of Wyoming.”

Hamilton has found a personal reward he never banked on.

His son went to school at Utah State University, got a degree in culinary arts, married a member of the LDS church and adopted that religion.

“Now, because of that fight, my son can become a priest in the LDS religion,” Hamilton said. “How beautiful is that?”