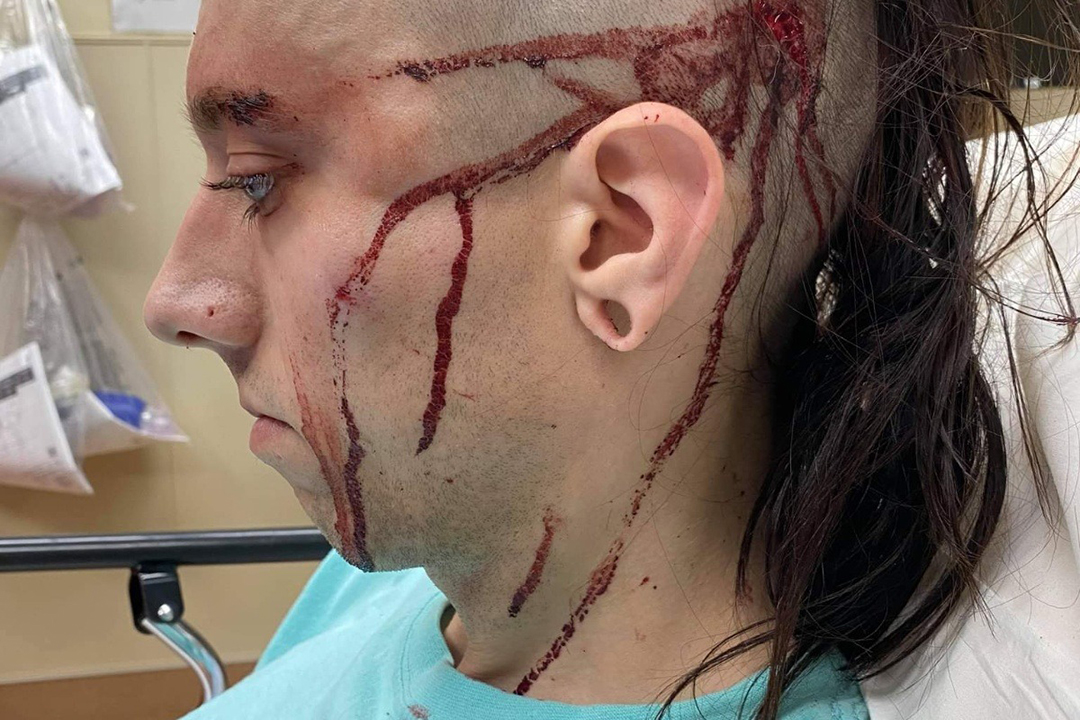 Rilee Shipley is seen in the Wyoming Medical Center’s E.R. after allegedly being attacked at her apartment complex last Thursday. (Courtesy)

CASPER, Wyo. — A Casper resident was hospitalized last Thursday after a reported violent attack at her apartment complex’s dog park.

Rilee Shipley, who is transgender, believes the attack was motivated by transphobia.

“To me in my mind, there’s no question about whether or not it was geared towards homophobia or transphobia,” she said, “especially with with the ease with which he threw around the N-word at me.”

Though she is white, Shipley says the attacker used the N-word racial slur numerous times, as well as the word “b—-” during the incident that sent her to the Wyoming Medical Center’s E.R. by ambulance with facial fractures and wounds on her skull.

Shipley says she’ll likely need surgery to repair her caved-in cheekbone, and has an appointment with an ophthalmologist for a fractured eye socket.

Shipley says the incident started early that morning in the dog park, when a resident in another building on the complex entered the gated park with his dogs unleashed, causing Shipley’s dog to become nervous.

Shipley said she picked up her dog and had some words with the other person.

“He called me the N-slur several times and if I had a problem I needed to come back and we could handle it.”

Shipley says she instead went to the apartment office to report the incident.

Later that night Shipley was again letting her dog use the dog park when she saw the man from earlier with the same dogs, along with another person.

She says he started screaming through the fence, enraged that he’d been reported at the apartment office, before entering the dog park and knocking Shipley down.

“As I was knocked down and putting the leash on my dog, he told me that me and my piece of s— dog deserve to die,” she said, “and he called me the N-slur again and the word ‘b—-‘ and stomped me on the side of the head, and kicked my face into the fencepost.”

Shiplee started transitioning in 2017 and has always been open about who she is, she said. Over all, she believes Wyoming has become more tolerant in some ways, but that old prejudices still exist.

“Someone told me once, ‘this is Wyoming: we don’t take offense to gays, we take them to the fences,'” she said, referencing Matthew Sheppard, a gay UW student who was found barely alive after being beaten and tied to a fence just outside of Laramie in 1998. He later died in a Fort Collins hospital.

“That’s been a fear of mine since I first came out and started transitioning, and to have lived through that is terrifying.”

Recent high profile anti-LGBTQ incidences in the state have been reported, including an uproar over a planned show by a transgender magician from Iowa at the Campbell County Library, and a hateful novelty shirt sold at a Cheyenne bar.

According to a statement from the Casper Police Department, the case is under active investigation by the department.

A GoFundMe account has been set up to help with some of the medical bills and lost wages from missing work.

“I know that they’re still out there, so I have some fear about that,” Shipley said.