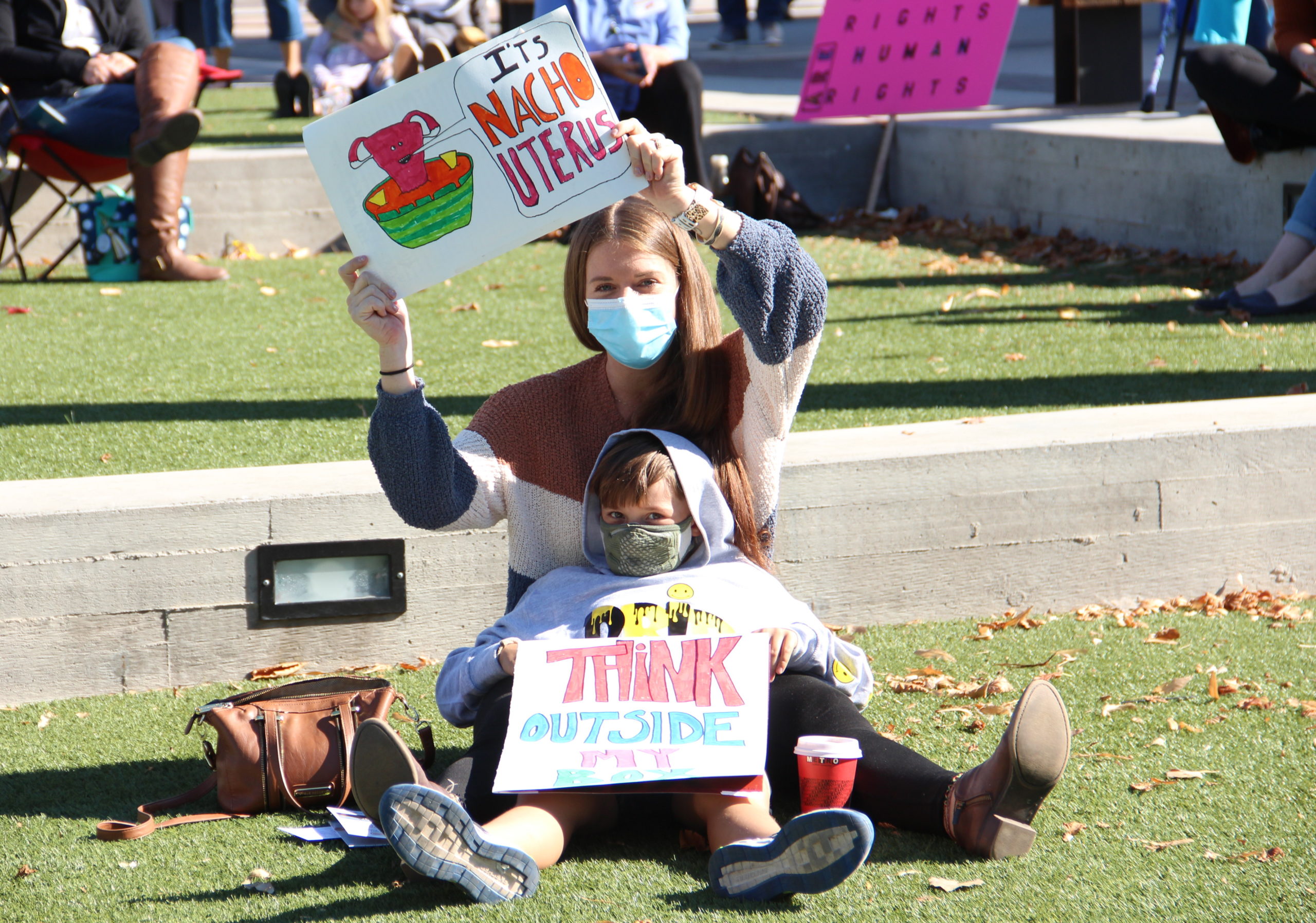 CASPER, Wyo. — As part of nationwide day of demonstration aimed at sending a message to the U.S. Supreme Court, a rally and fundraiser for women’s reproductive health care rights was held Saturday at David Street Station.

The high court will hear arguments in December as Mississippi appeals a lower court’s block on the state’s ban on abortions after 15 weeks of pregnancy.

Mississippi is not asking that the court explicitly overturn the 1973 Roe v. Wade decision, but advocates feel “a decision favorable to the state could lay the groundwork” for allowing even more restrictions, including bans on abortion once a fetal heartbeat is detected, as early as six weeks, the Associated Press reported.

Speakers at the “Buck Off My Body” rally, hosted by Wyoming Rising and Pro-Choice Wyoming, said recent legislation passed and introduced in Wyoming also establish precedents that could criminalize abortion in many cases.

Holly Thompson with pro-Choice Wyoming, said “we are facing a full-scale assault on Roe v. Wade and abortion access.”

She pointed to three laws signed into law into Wyoming imposing more abortion restrictions. One was SF 96, which would make it a homicide if an unborn child died as a result of assault on the mother.

Thompson said that though that “sounds reasonable,” it establishes “fetal personhood,” which could result in false convictions in cases of miscarriage.

Wyoming state Rep. Chuck Gray from Natrona County has praised the Texas law, and was lead sponsor on the proposed “Human Heartbeat Protection Act”, which passed committee but failed introduction in the last House session.

Speakers also shared personal stories and cases highlighting the full range of reasons women have chosen to abort. They included conception after rape, pregnancies that pose a serious or mortal hazard to the mother, and the identification of genetic defects in the fetus that would severely impair the child’s quality of life.

There were also calls for respect for those who held opposing viewpoints.

“Beware of moral certainty,” said speaker Drew Hill, saying that those on both sides saw the issue as “two plus two equals four.”

One family represented the anti-abortion sentiment from their truck parked on the street. At least one rallier engaged in a brief, terse exchange with them.

“If you’re talking about morals, we get our morals from God,” Mother Jody Schmidt told Oil City following the rally. “The moral of ‘do not kill’ is number one.”

Schmidt said life begins at conception, and believes science has proven has much, as the fetus has its own DNA.

In cases where chromosomal or genetic deficiencies were detected in utero, Jody’s husband Cleetus said, “Doctors can be wrong. We shouldn’t be in the position judging the value of one life above another. That’s called ‘eugenics.’”

Cleetus worried that such selection could end up removing people from society like those with Downs Syndrome, many of whom live accomplished and viable lives.

“Life is life, and it’s worth living and supporting,” Cleetus said.

“I would like to honor the people who also disagree with me,” Hill said in his remarks, “people who express themselves and have come to a different realization of what is moral in their minds. … I don’t think I’m wrong, but I understand that someone could reasonably come to an alternate conclusion.”

Dr. Tanis Lovercheck-Saunders, a Casper College history professor, said that the abortion issue was largely apolitical until the the 1970s. Ads for “female monthly pills,” typically herbal supplements, ran in newspapers, including in the Cheyenne Daily Leader. The practice was so widespread that the first restrictions came about partially in response to public health concerns about the prevalence of the unregulated products.

Cultural resistance to the practice began in the late 1800s amidst an anti-immigrant “panic” and fears that that white, Protestant women were having fewer babies than immigrant groups, including Catholics, she said.

The first laws against abortion were introduced by the American Medical Association as part of an effort by the male-dominated medical field to supplant midwives, she said.

“Prior to 1972, most Gallup poll surveys show that, if they considered it a political issue at all, more Republicans supported reproductive choice than Democrats.” (In one poll, 68% of Republicans and 59% of Democrats agreed the decision should be between a woman and her physician).

That began to change during the culture wars after WWII, when the abortion issue was conflated with Civil Rights and related movements to shore up a coalition of those “unhappy with changes in society,” she said.

“I was adamantly pro-life [under any circumstance] for half of my life,” Lovercheck-Saunders said. It was her mother that changed her mind, asking her how she would feel if her disabled sister were to be forced to give birth following a rape.

“Women are moral beings,” said Unitarian minister Reverend Leslie Kee, and called on supporters to “articulate a religious response to those who broadcast their religion as an exclusive claim to the moral high ground.”

“It’s time for the shaming and moral judging to go away.”

Testimony by Riata Little Walker was read by Ifland. Little described herself as stable, self-employed Republican woman who terminated a wanted pregnancy. Because of a heart defect, the probability of the fetus surviving birth would have been exceptional, requiring subsequent artificial incubations and heart surgery. The baby would also most likely have had a chromosomal anomaly.

“Basically what it came down to was, she never had a chance at life. How was it fair to keep her body alive just to be poked and prodded with no cure and no chance of ever living outside of a specialty hospital with 24/7 specialty care?” Walker said.

Speaking to Oil City after the event, Ifland addressed the notion that supporting bodily sovereignty on the abortion issue, while supporting COVID-19 vaccine mandates, was hypocritical.

“What happens inside a woman’s body could possibly only affect the woman,” Ifland said. “That’s not the case with a contagious pathogen. It’s [killed] 700,000 people so far, and there is an average of nine people impacted by each of those deaths.”