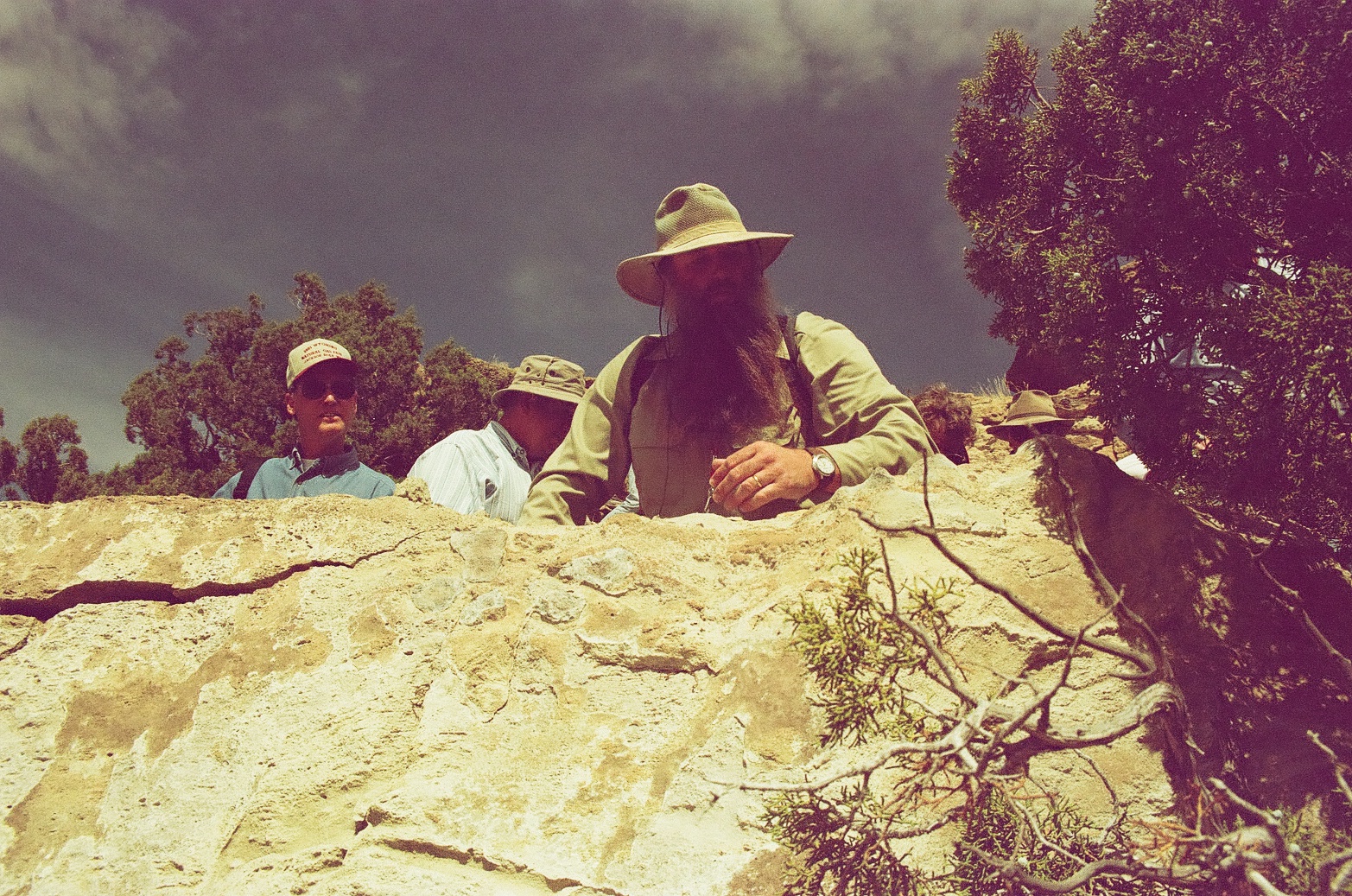 Casper College geologist Dr. Kent Sundell points out dinosaur bones in a rock at Alcova during a field trip sometime in the early 1990s. The image was hidden on an unprocessed roll of film for decades until being discovered in New Hampshire. (Courtesy Sarah Nolan)

“That event was just a single one-day trip just for the local geologists to go see Alcova,” said Sundell. “We had to rent the pontoon boats out there at the marina, and then we just went up and down the canyon and I was a tour guide.”

It’s a day that for the most part Sundell would have forgotten, but it was important enough for someone on the trip to document with a camera. After finishing the roll of Kodak film, that photographer tucked it safely into a camera bag.

In 2019, University of New Hampshire at Manchester student Sarah Nolan and a friend took a drive to the White Mountains to shoot photos of fall foliage with her vintage Olympus camera.

“I had just gotten into film photography,” said Sarah, now 25. “We stopped in Littleton, New Hampshire, and we went to a brewery, and they have a lot of thrift stores. So we started looking around the thrift stores, and I thought I’d get myself a bag for my camera.”

Sarah soon found the exposed film roll in the bag, and rather than toss it out, she decided to send it along with her own film to a lab in California.

“I remember when I sent it, I put a little note in the order saying, ‘I have no idea what’s on that roll of film; it’s not mine if there’s something bad,'” she said. “I was really worried about it.”

“When they came back I was shocked — they were so beautiful. This is definitely not New Hampshire.”

The pictures are a little murky with some yellow color cast, but are otherwise quite good after hiding in latent form for nearly three decades.

Sarah, who is studying biotechnology and working overnight shifts at a hospital lab, soon filed away the negatives and moved on with her busy life.

Those photos could again have been forgotten, until Sarah saw a post on a local Facebook group from someone trying to crowdsource information on old photos they had discovered.

“They were trying to find who the owner was, and I thought, ‘Oh, I should post mine too.’“

Online sleuths soon zeroed in on the location using registration numbers on the boats. Then someone recognized Sundell and passed along his contact info. With that information, Sarah sent him an email along with a Dropbox link of the digital scans.

Sundell remembered where the group was after seeing the photo of him leaning over a large rock.

“That particular rock ended up having two Diplodocus feet … and it had another bunch of really nice dinosaur bones sticking out,” he said. “They were in fact so good that the Tate Museum decided to get the permit, and we went out there and and cut the feet out.”

“That’s the reason they took that picture; I know because I was pointing out the feet in the block.”

The fossils eventually recovered from that rock are now in the Tate’s collection, he said, but the photos show where and how they looked at the site.

“We’re trying to figure out whose camera it was,” he said. “You see, a lot of the the geologists who go on those trips are kind of elderly, and particularly on boat trips like that where we don’t have to walk as much.”

Most of the photos appear to be from the Alcova trip, said Sundell. Because the others were shot in Colorado, he suspects that the photographer traveled up from there. He’s even gone through all of his surviving records from the early 1990s, all to no avail.

Thanks to her social media post, Sarah now knows who’s in the pictures and where they were shot. But who shot the film, why it was never processed, and how it ultimately ended up in New Hampshire is still a mystery.

“I still have hope,” said Sarah. “I really want to get the negatives back to whoever took them, because they’re really cool.”