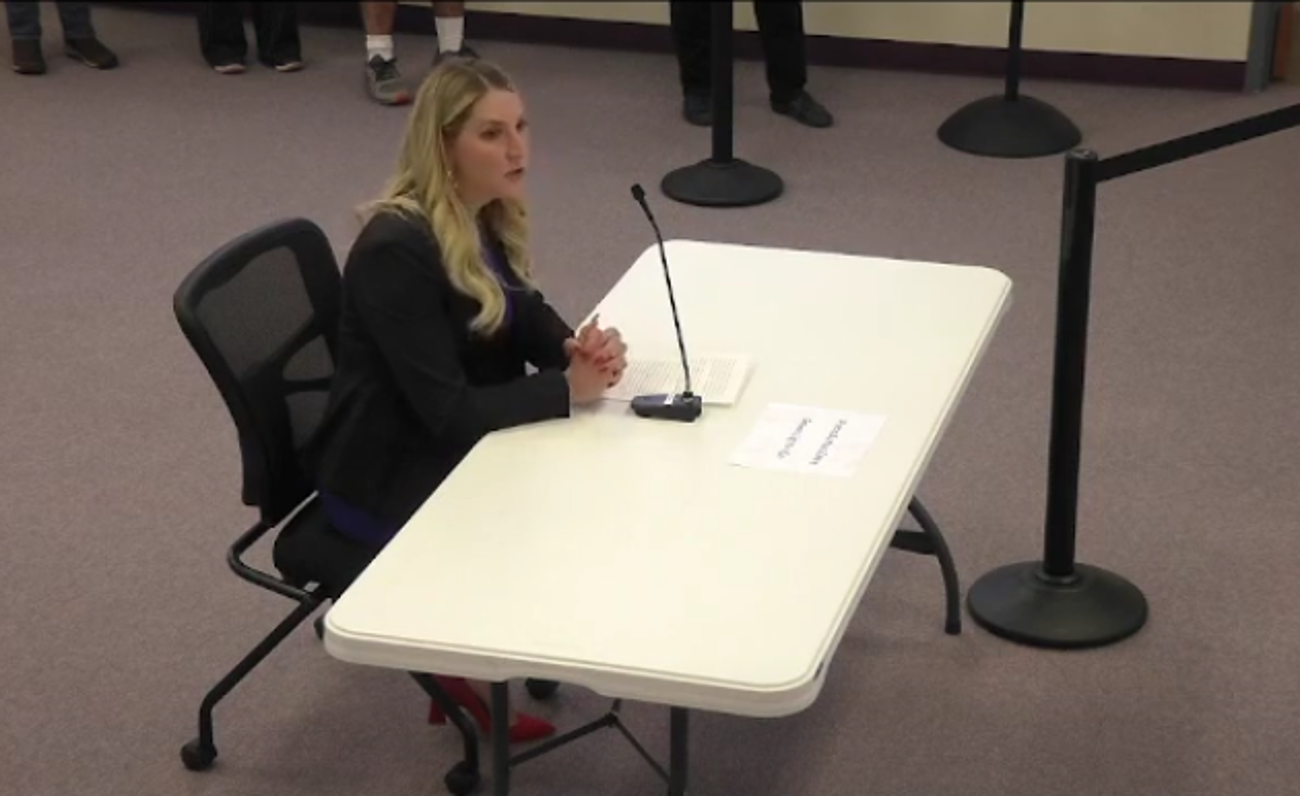 Megan Degenfelder, the Republican nominee for Wyoming superintendent, spoke at the Natrona County School District Board of Trustees meeting on Monday, weighing in on a book censorship debate with the election just about two weeks away. (Screenshot via NCSD, YouTube)

CASPER, Wyo. — With General Election Day quickly approaching, the Republican nominee for Wyoming superintendent waded into a debate on Monday about whether two books should be removed from Natrona County School District high school libraries.

On Monday, Degenfelder attended the Natrona County School District Board of Trustees meeting, where she expressed her opinion about an ongoing debate about the books “Gender Queer” by Maia Kobabe and “Trans Bodies, Trans Selves” by Laura Erickson-Schroth and whether those books should be allowed to remain in high school libraries.

Degenfelder began by stating that she supports local decision-making and that the authority to decide whether or not the two books are OK to stay lies with the NCSD Board of Trustees. However, she said she finds the books inappropriate for public school libraries.

Some of the people who want the books removed from school libraries during recent school board meetings have tried to emphasize that their objection to the books is not that they are geared toward an LGBTQ audience but rather because they think some of the imagery in the books is pornographic and they are opposed to pornography in school libraries no matter what audience it is geared toward. Degefelder made a similar point.

“Having reviewed these excerpts [from the books], such explicit images of any sexual orientation are not only beyond the scope of the content and performance standards of our sexual education and health standards, but they are not suitable for minors that are under the age of sexual consent and they are an inappropriate use of our taxpayer funds,” she said. “Explicit and arousing sexual graphics are not the best and only way to support our LGBTQ students.

“There are many places for books such as ‘Gender Queer’ and ‘Trans Bodies, Trans Selves’ to exist as resources for adult individuals but a K–12 public taxpayer library with minors is no such place.”

Degenfelder concluded by stating that if she is elected, she is ready to work with school districts across the state “on navigating these issues.”

NCSD has been following its Administrative Regulation 6232 to review the two books after someone filed a formal complaint about their availability in a high school library in August. A committee was formed per that policy and, after reviewing the materials, decided the books should be allowed to remain. The committee’s written decision is available online.

The school district received a formal appeal of the committee’s decision on Oct. 20, NCSD Superintendent Mike Jennings said on Monday. Per Administrative Regulation 6232, the NCSD Board of Trustees is set to act as the final review panel to decide what will happen with the two books. Procedures for how that will be conducted are to be determined by Board Chair Ray Catellier.

While a timeline has not been set for when the board’s deliberation will occur, Trustee Rita Walsh said Monday she expects a decision will be reached by the end of November.

While some trustees said Monday they will wait until the board’s formal review of the two books to express their personal opinions, Trustee Dave Applegate offered some of his views and some suggestions as to how the board can approach its review of the challenged library materials.

First, he addressed people from the LGBTQ community who have weighed in on the topic.

“I thought the comments from this community and its supporters have been thoughtful and respectful,” Applegate said. “It takes bravery for these students to provide public comment to this board. I want to emphasize to them that this board sees their humanity. Your humanity is our common ground and differences in personal identity do not influence how I see you as a fellow human being.

“The LGBTQ community has historically, and it still occurs today, been stigmatized, marginalized, bullied and harmed, and I heard the emotion when you expressed your thoughts regarding these books.”

Applegate added that he found some of the comments provided by mental health professionals to the school board “compelling testimony when they discussed suicide rates and safety issues related to transgender children.”

“I think we should all recognize this risk and be highly sensitive to it,” he added.

Applegate continued by saying he found comments from people concerned about the availability and appropriateness of the books thoughtful.

He suggested that there may be consensus among many that parents have a right to decide whether or not something is appropriate for their children to see, but that there are different views about how that should be handled.

Some of the people who have urged the school board to leave the books in schools have noted that parents who don’t want their kids to see the books can request that libraries not check out books to their own children. Others in favor of removing books from school libraries have argued that while parents can ask libraries not to check out a book to their children, that wouldn’t prevent a student from accessing the book while in the library itself.

Applegate offered a potential framework to guide the school board’s review of the two books. He suggested several questions for trustees to contemplate:

What is the appropriate age or maturity level for these books?

What control should parents have in restricting access for their children to sexually or violently explicit images or content in a public high school library?

Should the school district be providing materials that have sexually or violently explicit images or highly sexualized content in high school libraries?

“In other words, the appeal on the two books in question should be considered in the context of this broader question related to explicit R-rated imagery within our libraries,” Applegate said.

While school librarians have communicated that they don’t purchase “erotica” as material for school libraries, Applegate said the term “erotica” is not clearly defined in school district policies. Adding such definition into policies and regulations might be a way for the school board to act in its review, he suggested.

While he said he is not yet prepared to say whether he thinks the two books specifically being challenged should or should not be allowed to remain, Applegate did stake out his position in regard to a question about transparency.

Applegate said he thinks the school district should develop a policy of making a list of all materials in school libraries available for parents and guardians to review. Such a list should be updated each year to note materials that have either been added or removed from libraries. If content suited only to older students is allowed to remain in libraries, Applegate said he thinks that content should be clearly marked in the annual listing of library materials.

“The school district is open to inquiry and scrutiny and the sun should shine on our curriculum, our policies and the books and other materials we buy for our libraries,” Applegate said.

While Applegate suggested some outline of a way to approach a review of the challenged library materials, he said he is open to other ideas about how the review can be conducted.

Comments from other trustees and people from the community can be reviewed in the school district’s recording of Monday’s meeting: