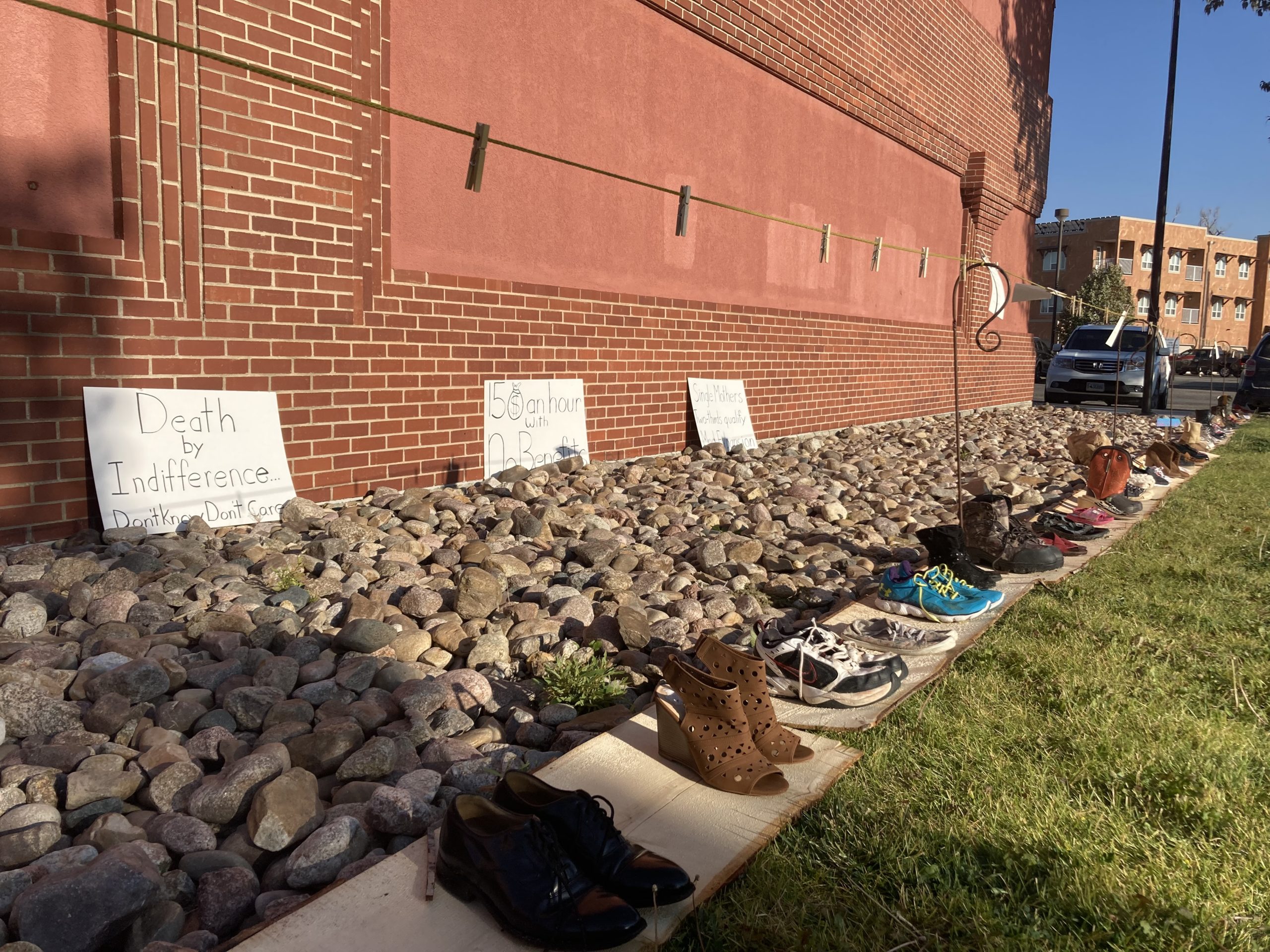 Shoes representing lives lost due to lack of health care coverage at the Healthy Wyoming rally for Medicaid expansion at the Nicolaysen Art Museum in September. (Gregory Hirst, Oil City)

NOTE: A previous version of this story said the poll found 68% of Wyoming Republicans support Medicaid Expansion. However, the American Cancer Society Cancer Action Network said that its press release contained an error and the poll actually found 58% support among Wyoming Republicans. This article has been updated to reflect the corrected information.

CASPER, Wyo. — A new poll has found that a majority of Wyomingites, including Wyoming Republicans, support expanding Medicaid in the state, according to a Tuesday press release from the American Cancer Society Action Network.

The poll was conducted by New Bridge Strategy and found that about 66% of Wyoming residents support expanding Medicaid. That includes 98% of Democrats in the state, and 64% of Independents and 58% of Republicans.

“Additionally, nearly two-thirds of Wyoming voters say they know someone who would benefit from Medicaid expansion and more than one in four (27%) say they are worried that they or someone in their household will be without health insurance in the next year,” the press release states.

The poll also found that over 50% of Wyoming residents say the health care system isn’t meeting the needs of working, lower-income citizens. About 33% see health care costs and access to health care as the most important issues facing the state.

Over 25% said they are worried they will lose health insurance.

Wyoming is one of 12 states that has not expanded Medicaid and expanding it could provide access to care for an estimated 24,000 people.

“The latest Wyoming Department of Health numbers suggest an estimated 29% of new enrollees in Wyoming would be between the ages of 50 and 64,” AARP Wyoming State Director Sam Shumway said in the release. “These are our neighbors and co-workers and when they thrive, so do we. We know that access to care makes it easier to work, find a new job, pay for basic needs and succeed in today’s economy.”

The press release notes that the Wyoming Legislature considered a proposal to expand access to Medicaid during the 2021 General Session. That bill passed in the House of Representatives but failed in a Senate committee by one vote.

“Our neighbors in Montana, Nebraska, Utah and Idaho are all benefiting from extending health coverage to low-income residents — it’s time for Wyoming to join them,” American Cancer Society Action Network Wyoming Government Relations Director R.J. Ours said. “These results show people’s very real concerns about cost of care and access to it for themselves and their families. They’re picturing loved ones who may be struggling to see doctors, pay for medications and get the care they need.”

American Heart Association of Wyoming Government Relations Director Richard Garrett added, “Regardless of political party or region of the state, Wyoming residents want our family, friends and neighbors to have health care. It’s great to see this level of support across the state, and we will be working hard with lawmakers to make sure that we increase access to health care for those who need it most.”