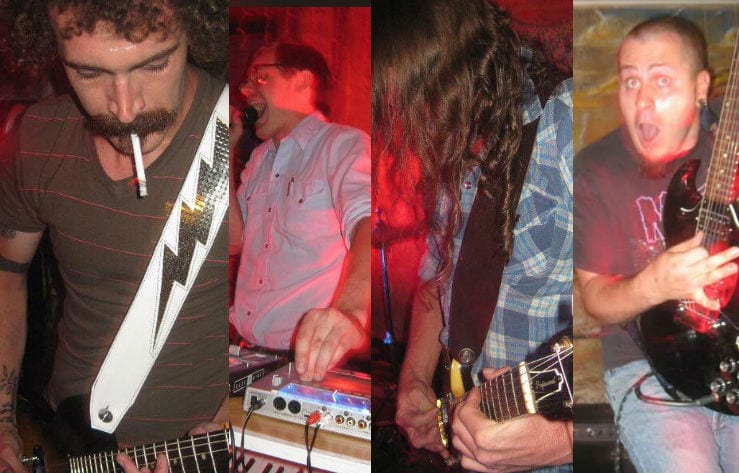 Several bands from around the state will find their way to the Junction of Highways 287 and 487 this weekend, when the town of Medicine Bow hosts the 9th Annual Battle of Old Wyoming.

“It is not an actual ‘Battle of the Bands,'” says Casper record store clerk and one of the Battle’s organizers, Brandon Schulte. “I’m loathe to use the word ‘festival,’ because there’s too many festivals, that word gets thrown around too often these days. It’s a party. It’s an underground celebration of underground music and culture, focused on the state of Wyoming.”

The Battle of Old Wyoming began as a collaborative effort between Schulte and his friends, Thomas French and Charlie Stewart. In an archival interview from the first Battle of Old Wyoming, French explains that he was inspired by a trip to Laramie when he stopped in Medicine Bow for lunch. Exploring Medicine Bow’s historic Virginian Hotel, he was inspired to buyout the hotel and throw a free rock show. The tradition has maintained now for 9 consecutive years.

“We’ve never charged cover charge. This is not about ticket sales, it’s not about the organizers getting anything, it’s a 100% volunteer effort,” explains Schulte. “This is basically the one gathering in Wyoming where all of the weirdos are the ones that come to center-stage. It’s about experimental electronic, it’s about death metal. It’s about giving great punk bands and great hardcore and post-rock, and death-rock, and avant garde and experimental bands to play for a large, receptive audience.”

Schulte goes on to say that he and the other organizers have traditionally viewed the Battle as a community service, and not a way to make money. “As far as money, it’s more important to me and to the people who have helped this thing grow and survive, that the money goes to the fine people of Medicine Bow.”

Medicine Bow’s Tara Johnson works at the hotel during the Battle, and had high praise for the event. Johnson confirmed that the party serves as one of the main summer weekends for the hotel.

During the early 1900s, The Virginian hotel was the largest hotel  between Denver and Salt Lake City. The hotel was named after the famous Owen Wister novel, which takes place in the areas surrounding Medicine Bow. Across from the Virginian Hotel is the Owen Wister Cabin, which was to the are, log-by-log and now serves as a museum.

Attendees of the Battle have booked out the Virginian hotel entirely, many other attendees camp-out nearby, some still are known to sleep in their vehicles.  Music fans can also belly-up to the notable Virginian Hotel bar, which in years past has been run out of Pabst Blue Ribbon and Wild Turkey before the end of the Battle.

The party is held over two nights, August 4th and August 5th.  Bands featured include:

“If the years have taught me anything, it’s that there’s already such unbelievably interesting music here in the state of Wyoming,” Schulte says. “So many people leave a Battle of Old Wyoming saying ‘oh my god, I had no idea that this kind of thing happens in this state.’ And it does, it totally does.”

The Battle of Old Wyoming will kick off tonight, August 4th at 6 pm, go until night, then will resume at noon on Saturday until late.