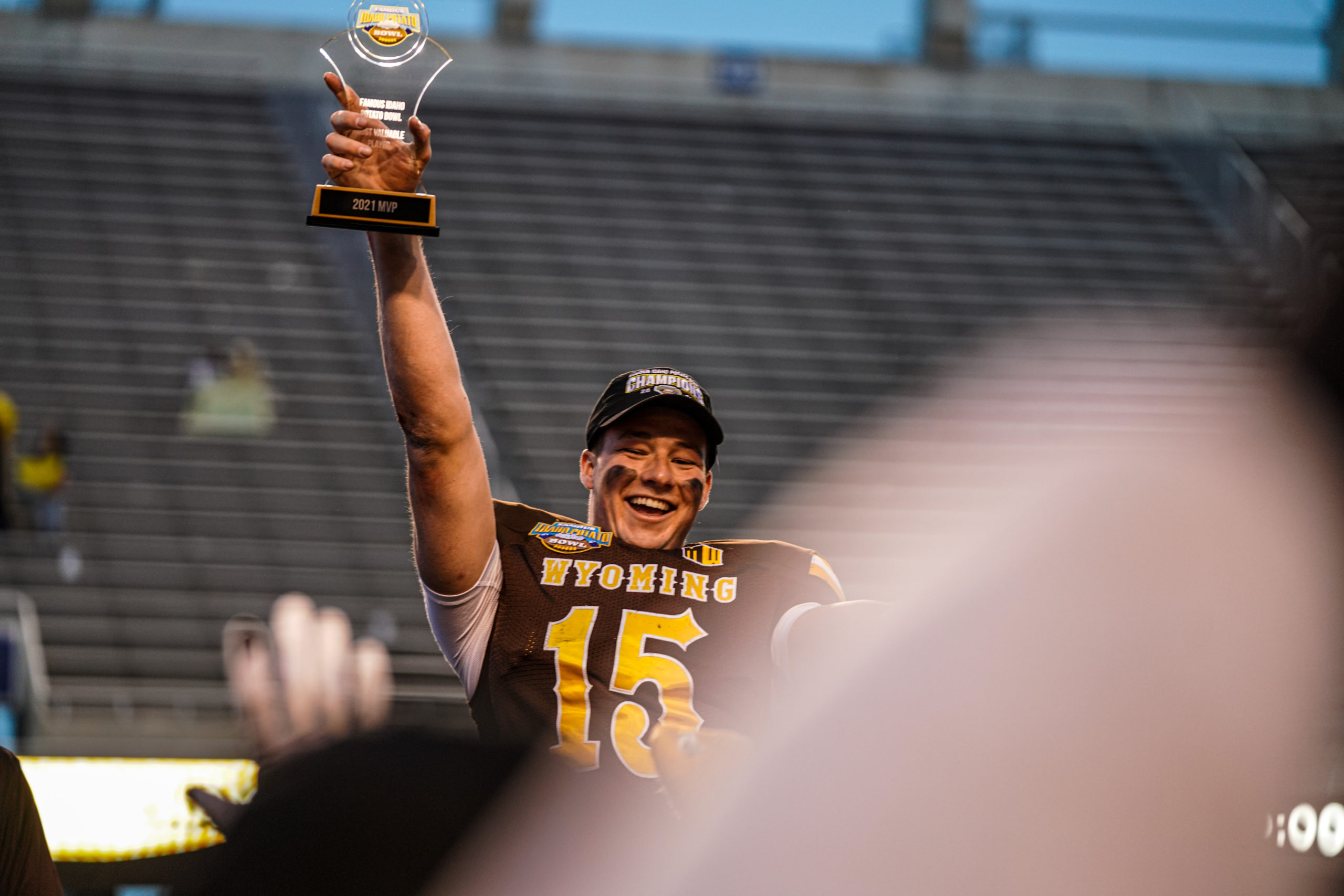 Hours after playing the game of his Wyoming football career, quarterback Levi Williams is likely going to be taking his talents elsewhere for 2022.

Moreover, his leading wide receiver, Isaiah Neyor, is hopping in the portal with him.

Williams and Neyor, both sophomores from Texas, entered the transfer portal Wednesday afternoon less than a day after they were each integral parts in the Cowboys’ 52–38 victory over Kent State on Tuesday in the Famous Idaho Potato Bowl in Boise, Idaho.

Williams was spectacular on the blue turf at Albertsons Stadium, scoring five total touchdowns (four rushing, one passing) as he ran for 200 yards and threw for 127 more en route to the bowl’s MVP award. He threw that score to Neyor in the second quarter of the game, a 42-yard strike that gave the Cowboys a 20–17 lead.

Williams’ performance marked the first time ever in a bowl that a quarterback had run for 200 yards and four touchdowns in a single game. But consistency was never the hallmark of Williams’ time in Laramie as he shifted in and out of the signal-caller role.

Williams threw for 2,210 yards, 13 touchdowns and 10 interceptions while running for 763 yards and 13 touchdowns in 17 games with the Pokes. A freshman backup in 2019 that eventually earned the starting job and led UW to win in the Arizona Bowl over Georgia State, Williams played almost every snap in a middling 2020 season before losing the starting job in camp to junior Sean Chambers, who suffered a season-ending injury in the first game of 2020.

After Chambers cooled off from a hot 4–0 start — when UW scored a combined 17 points in its next three games — Cowboys coach Craig Bohl subbed in Williams, who started the remainder of the team’s games before the San Jose State game October 30.

Chambers is likely the current favorite to step in the starting role again for 2022 as a veteran with starting experience. Current redshirt freshman Gavin Beerup threw 13 passes in 2020 as well. Junior Jayden Clemons and redshirt freshman Hank Gibbs are also on the roster while 2022 recruit Caden Becker will join the quarterback room in the fall.

Meanwhile, among the wideouts, Neyor was far and away the Pokes’ top receiving target this season with a team-leading 44 receptions for 878 yards and 12 touchdowns. By comparison, the rest of the roster had three receiving touchdowns combined.

Redshirt freshman Joshua Cobbs now steps in as the top returning pass-catcher next season, having snagged 25 passes for 245 yards and a touchdown. Tight ends Treyton Welch and Parker Christensen will be the only other returners to have caught at least 10 passes in 2021. Three-star 2022 receiving recruit Caleb Merritt and in-state tight end prospect Issac Schoenfeld are a couple of the new faces scheduled to arrive in Laramie for the next season.