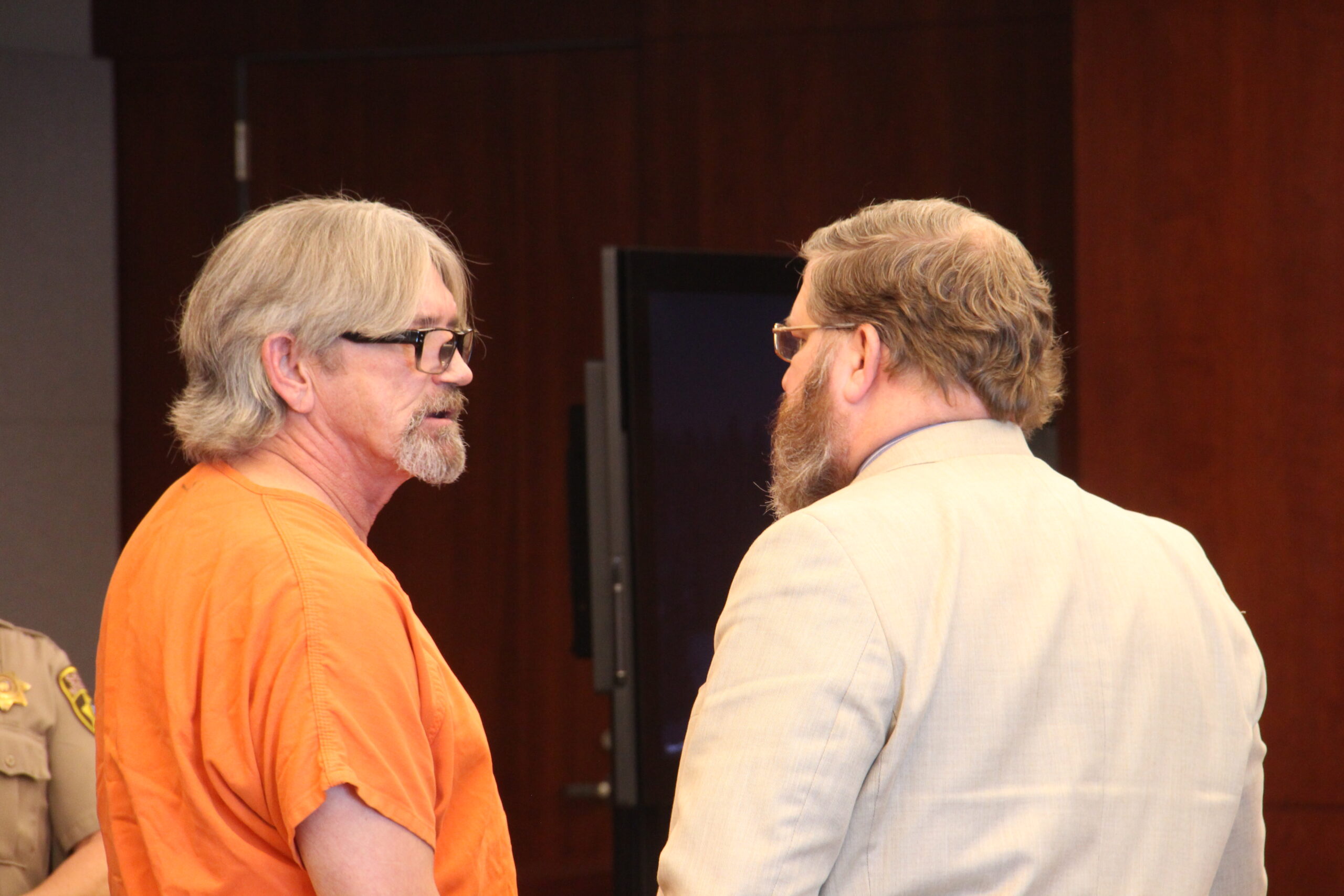 CASPER, Wyo. — A Casper police detective testified in extensive detail at a hearing Thursday as to what investigators found at the scene of a deadly assault on an elderly couple in a Paradise Valley home earlier this month.

CPD Detective Tiffani Elhart said at Dickerson’s preliminary hearing in circuit court Thursday that Dennis, who had been rushed to surgery in critical condition, had been taken off mechanical ventilation and was breathing unassisted as of Monday.

Dickerson is presumed innocent until proven or pleading guilty.

At the end of Dickerson’s preliminary hearing, District Attorney Dan Itzen asked that the defendant’s $600,000 cash-only bond remain in place given the nature of the case, the weight of the evidence, Dickerson’s damaged familial ties to the community, and his prior domestic assault conviction.

Dickerson’s attorney, Marty Scott, had argued for a reduction to $300,000 cash or surety, saying that the circumstances amounted to “an isolated incident” and the alleged behavior would be “completely out of character” for Dickerson.

Circuit Court Judge Brian Christensen agreed with the state and continued the existing bond. Dickerson’s case will advance to District Court for arraignment.

Itzen’s questioning for Detective Elhart elicited a thorough review of the investigation that began after Dickerson called 911 dispatch to report “a double homicide” at 6:51 a.m. on Sunday morning, Jan. 8.

Dickerson reportedly said, “Andy came at me and I just lost it. … Rose jumped on me and I knocked her up against the wall and it just went from there.” He reportedly said he had used a knife, and gave dispatchers the address to the victims’ home on Begonia Street.

Dickerson met with an officer at the Loaf ‘N Jug in his neighborhood near the Sunrise Shopping Center, reportedly telling the officer, “I think my brain is broken.”

Interviews with Dickerson and other family members indicate that the family had been securing the services of home healthcare workers to care for the elderly couple due to their declining health.

Family members said Martin Jr.’s own condition, including a brain injury, made him sometimes difficult to get along with, and he could be abusive toward the home healthcare workers, some of whom declined to come back.

The state believes Dickerson drove out to the victims’ home the night of Jan. 7 to confront Martin about the situation. Footage from a neighbor’s Ring doorbell shows what police believe to be Dickerson’s maroon-colored Suburban parked at the Begonia Street address shortly before 9 p.m.

Police who responded to the Begonia Street home the next morning found the victims on the floor of the primary bedroom between the bed and the wall. Martin Jr. had been deceased for several hours, Elhart said. Medical examiners said he had been beaten and multiple stab wounds were located, including one that had cut a vein.

Elhart said police could hear Dennis moaning when they found her on the floor near Martin Jr. She had stab wounds in her neck and had also suffered blunt force trauma that caused a brain bleed. Elhart said Thursday that Dennis had marks on her face consistent with the tread pattern on Dickerson’s shoe: investigators believe she had been kicked.

Investigators found a paring knife on the floor beside the victims.

Elhart said a sock had been found on the kitchen counter of the Begonia Street home. It matched another sock investigators later found with other bloody clothing in a trash bag in a dumpster at a south Casper church where Dickerson worked as a handyman, Elhart said.

The other clothes found in the bag matched what Dickerson had been wearing in security footage at the Backdoor Lounge on the afternoon before the homicide, Elhart said.

Elhart testified extensively on the investigation at the Begonia Street home. The use of BlueStar, a solution that causes blood to illuminate when sprayed, revealed trace amounts of blood on and in the kitchen drawer where knives matching the one in the bedroom were found. Blood was also found in the bathroom sink.

A significant amount of blood was found on the bottom and underneath a rug in the bedroom, though the top of the rug appeared to have been cleaned. Elhart said a home carpet cleaning machine had been discovered in Dickerson’s garage, and its contents were under lab analysis. The BlueStar spray also seemed to indicate that there was blood on the handle of the carpet cleaner.

In his cross-examination, Scott asked if BlueStar solution ever caused anything other than blood to light up. Elhart said some cleaning products may glow, but investigators could easily tell the difference.

Scott also probed about the probable cause cited in the search warrant for Dickerson’s home on Navarre Street in south Casper, where investigators spent a week looking for evidence.

According to police, Dickerson said he had showered at home before calling police. This was cited as part of the probable cause for writing the warrant, Elhart said. Scott asked Elhart if Dickerson had told the officer this after invoking his right to counsel. Elhart agreed that he had, but that there were several warrants written during the investigation, all supported by other evidence.