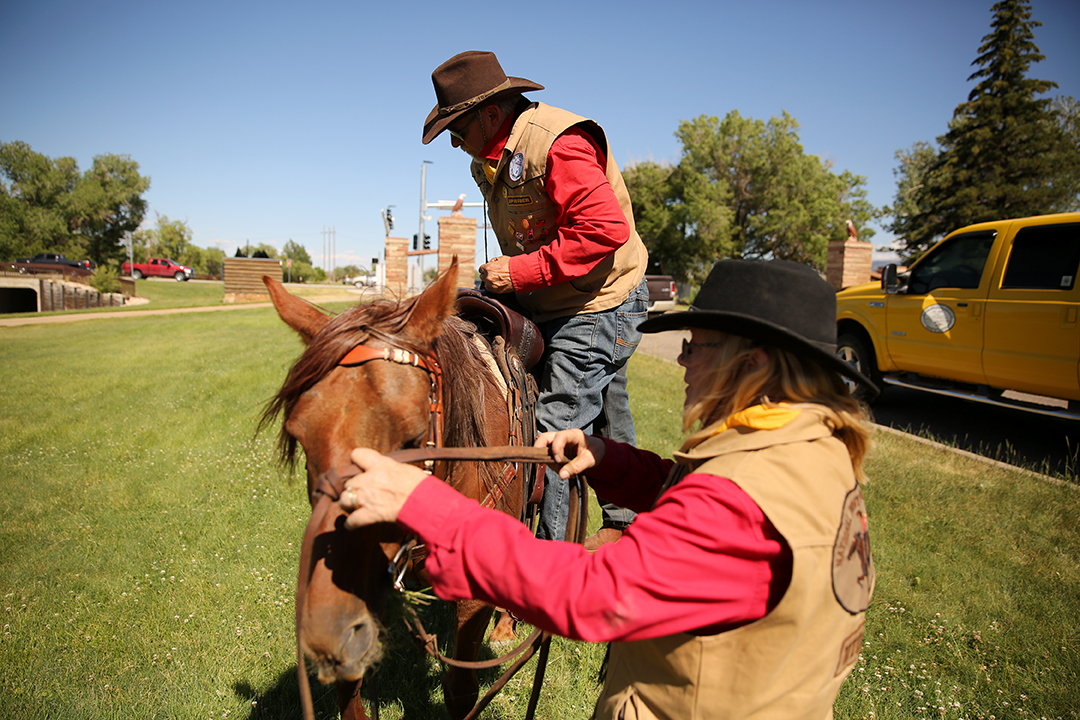 CASPER, Wyo. — The long, lush grass at the Fort Caspar Museum in Mills proved irresistible for Wildfire on Tuesday.

The horse’s owners, Paula and Randy Thoroughman, struggled to rig up the bridle and reigns as he munched on big mouthfuls of grass. He was hungry, getting up in the wee hours to be part of the annual Pony Express Re-Ride that retraces the route of the fabled mail service that only operated from April 1860 to October 1861.

Wildfire’s owners rescued him from a kill far in Oklahoma just a few months ago, but on Tuesday the hungry horse was part of a group of people riding in shifts from Sacramento, California, to St. Joseph, Missouri. It’s the Thoroughmans’ sixth time participating in the re-ride, which started in sections around 1978 before eventually covering the entire historic route.

“This dude’s been riding 20 mph every day, every time we ride him,” said Randy. No wonder Wildfire’s hungry.

The teams run at full gallops a few to several miles at a time before being switched out to rest, especially in these unusually hot temperatures.

The teams crossed the Utah–Wyoming border late Monday and continued through the state through Tuesday, stopping at the Fort Caspar Museum just before 4:30 p.m. and continuing on to the Historic Trails Center.

According to their Facebook page, teams hit Glendo around 1:30 a.m. on Wednesday, expecting to reach their final destination by Saturday.

The exhausting trek is a way to honor a unique period of American history, according to Melva Sanner, national president of the National Pony Express Association.

“I try to get young people educated on how it used to be, instead of just instant texts and Snapchat,” said Sanner. “That’s how you communicated back then.”

The Pony Express was a service operated by the Central Overland California and Pikes Peak Express Company that never saw profitability, said Sanner. It was quickly made obsolete by the telegraph and growing train services.

Sanner can’t say exactly what remains fascinating about the short-lived mail service, except that its part of American history is irresistible to people involved in the re-ride.

“It’s a Western adventure,” she said.