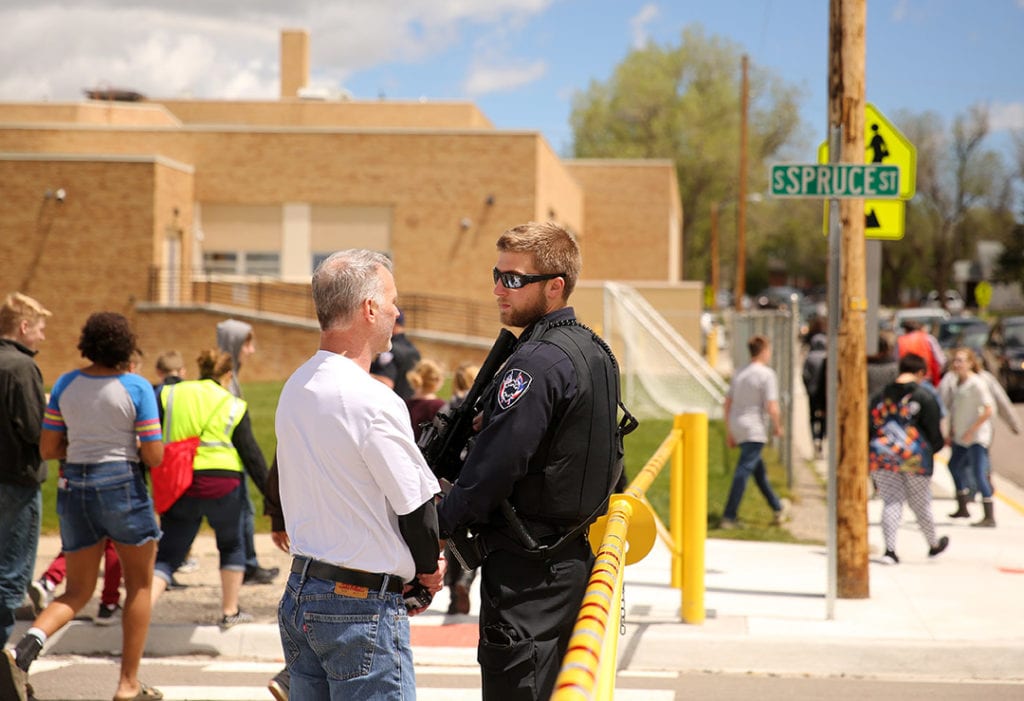 CASPER, Wyo. — Ensuring student and staff safety is a priority for the Natrona County School District.

121 different threats were assessed, but these ranged in severity, according to NCSD Director of Safe Schools Thomas Ernst.

Ernst talked about the district’s safety protocols during a Monday, June 10 school board meeting.

He said that the district takes all threats seriously.

“It could be as simple as students playing basketball and someone saying something stupid [like] ‘I’m going to hurt you,'” Ernst said.

Once a school becomes aware of a threat, they will carry out their own threat assessment if it is deemed to be more mild in nature.

But if the threats appear more serious, schools reach out to Ernst and he’ll become involved in the threat assessment process, reaching out to law enforcement agencies if it is appropriate.

Ernst also talked about whether sufficient preventative measures are in place in the district. A big part of that is ensuring that schools rely on only one entryway for visitors, have locks in place and methods to verify that visitors pose no threat.

Trustee Dave Applegate asked whether all NCSD schools have completely implemented such measures.

NCSD Executive Director of Human Services & District Services Mike Jennings said that 88 security and safety projects since the fall of 2017 have either been completed, are underway or are planned.

Those include entryway safety improvements like lock upgrades, exterior cameras and signage notifying the community of which entrances to use.

Other safety-related projects include improving bus drop off and loading lanes and installing gates.

Ernst said that one area he is concerned about is ensuring the security of after-school events such as sports competitions.

“What I don’t feel good about is events after the bells, high casualties, high impact events,” he said. “How do we control these people that attend some of these events so that they are safe?”

Event safety is not only about threats from people toward other people, but about weather events like tornadoes and lightning as well, Ernst added.

For that reason, he said he’ll put additional efforts toward ensuring that event staff are trained on what to do in an effort to manage “the chaos as best we can.”

She said the AlertMedia app was recently used to notify parents and guardians of a bomb threat situation at Dean Morgan Middle School.

“That’s the biggest tool that we utilize,” Southerland said, adding that the app allows alerts to only be sent parents and guardians of students at a specific school.

She said the district also informs any other district staff who they think need to know about the threat and also communicate with local media to share important information.

Southerland said that the district received 346 confidential messages through the Safe2Tell program this school year, up from 241 last year.

“Students can use Safe2Tell Wyoming to report: bullying, stealing, threats, fights, drugs, alcohol, weapons, sexual misconduct, harassment, stalking, dating violence, cutting, suicidal behaviors or any other violent or dangerous situations that threaten their safety or the safety of others,” reads the student section of the Safe2Tell website. “It is for the purpose of prevention and intervention, to help keep students safe and healthy.”

It is the third year that the program has been in place and Southerland said that messages are initially screened by dispatchers with the Wyoming Highway Patrol who may then share that information with the district.

There are three staff members at each school who are responsible for looking at this information, and three district officials as well, Southerland continued.

Most of the messages come between 4-5 pm and Southerland said that 51% of messages come through the mobile app and 31% from the online browser.

Ernst said that he thinks a Caring About Student Success (CASS) program offered in partnership with the Casper Police Department will see more use in the future.

The program is designed so that the police department informs schools when, for example, a student’s parent or guardian was arrested. That is designed to let schools know that the student may have had a difficult evening which could affect their behavior the next day.

Ernst said that schools don’t use this information to confront students in any way, but it gives them context which can be valuable to understanding what students are going through.

He said there were only about a dozen CASS calls throughout the school year, likely due to police officers’ bust schedules. But Ernst said the district sees value in the program and hopes to see it continue.