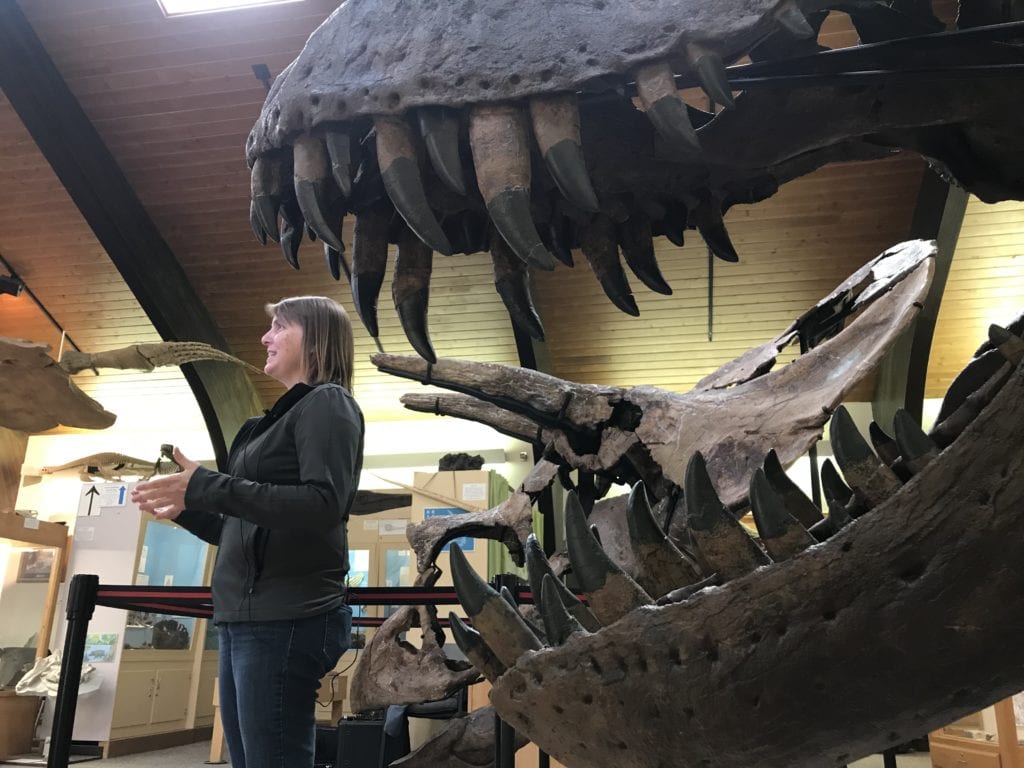 CASPER, Wyo. — The Tate Geological Museum has unveiled a treat for visitors that likely also tempted a Tyrannosaurus rex.

When “Nicole” the Torosaurus was still alive, she appears to have been bitten by a large predator, probably a T-Rex, according to Tate’s Collections Manager J-P Cavigelli. Bite marks are visible on the left side of the dinosaur’s skull.

But “Nicole” may have been a bigger challenge for T-Rex than her smaller cousins the Triceratops.

“One of the largest and most complete” Torosaurus skulls ever discovered was presented to the public on Thursday, Oct. 24, Casper College Museums Director Patti Wood Finkle said.

Cavigelli says the fossilized bones were discovered by Dr. Kent Sundell, a Casper College geology instructor, while taking students on a field trip to an undisclosed location in Natrona County.

“The left horn was eroding out of the ground,” Cavigelli explained.

Efforts then got underway to collect as many fossil pieces as possible from the site, though only skull parts were located.

That involved the help of students and volunteers and took seven days. Plaster jackets were used to maintain the integrity of the pieces and Wood Finkle says one such jacket weighed as much as 600 pounds.

The fossils were then taking back to the Tate where volunteers spent three years taking rocks off, sandblasting, then piecing the skull together with putty.

Volunteer Liane Herring boasts the most prep-work put into “Nicole’s” reassembly. She spent 1,897.5 hours on the project, Wood Finkle says.

Observers may note that “Nicole” looks quite like a Triceratops as they are both Certopsians featuring frills and large horns. But that’s if they’re not paying attention to her size and other details.

Cavigelli explains that Torosaurus was significantly larger and had two natural holes in the frill where Triceratops did not.

Those holes may have evolved as a weight reduction strategy, allowing the frill to get bigger, Cavigelli suggests.

Some of the other differences between the species may require the close eye of an expert, but Cavigelli points out that the nose and beak areas have some distinctions.

Another piece of the skull which interests Cavigelli is the brain case and ball joint which can be seen from behind. The ball joint connected to the dinosaur’s vertebra and Cavigelli and Wood Finkle chatted about how impressive it was that this bone could hold up the weight of such a big head.

The bite mark can be seen on the left jaw of “Nicole’s” skull. Cavigelli explains that holes near this area are places where the wound likely became infected.

But other signs in this region of the skull suggest that “Nicole’s” wound started to heal.

While many of the skull pieces were uncovered at the dig site, some were missing. Cavigelli explained that some parts, such as the missing tip of one horn, was reconstructed using 3-D scanning and printing techniques based off of the horn tip which wasn’t missing.

Torosaurus lived when Wyoming was still a tropical climate during the Cretaceous period and “Nicole” is roughly 67 million years old.

Torosaurus have been found from Texas all the way up into Canada, Wood Finkle says.

For those who still don’t have enough reasons to love “Nicole,” Wood Finkle offered one more.

“It’s heart-shaped,” she said, referring to the frill.

“Nicole” was so-named because the Nicolaysen family donated the skull to the Tate. She’ll now be a permanent member of the Tate collection family for viewers and learners to enjoy.