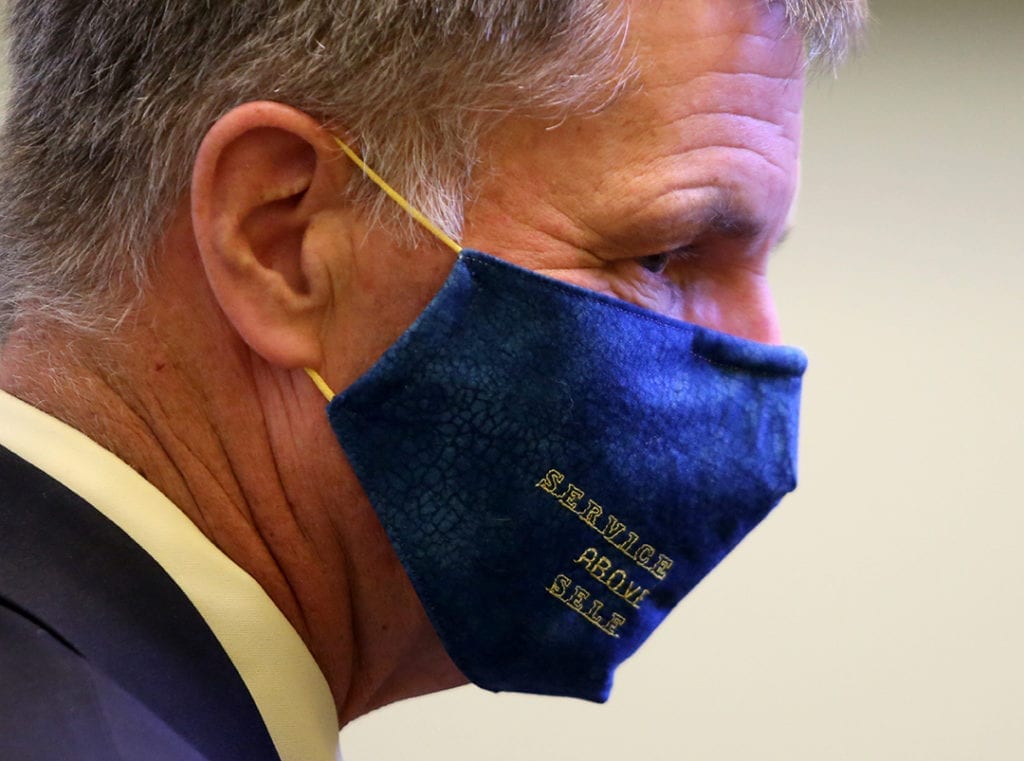 Governor Mark Gordon, wearing a mask that inscribed with “service above self,” talks after a dedication of the CWCC’s new suicide prevention hotline on Tuesday, Aug. 11, 2020, in Casper. (Dan Cepeda, Cap City News File)

Key to the nation’s economic recovery from the COVID-19 pandemic, Gordon wrote, is the need to explore and responsibly develop America’s energy and minerals.

“This President recognizes that a healthy country must be free,” Gordon wrote.

“As we emerge from this crisis I look forward to continuing our work with the Trump Administration,” Gordon said.  “Wyoming will be stronger and much better off because of it.”

“Wyoming’s abundant natural resource assets are fueling our state’s economic recovery and underpinning our nation’s resurgence. Resources such as coal, natural gas, wind, oil, soda ash, helium, uranium, and what are often referred to as critical or rare earth elements are essential to almost every aspect of modern life. New products like cell phones, batteries, composites and other high-tech materials play a critical role in our national defense and our everyday life. These products will power our economy, clean our environment and allow us to pursue this work more thoughtfully.

“We are the leading producer of coal, uranium and soda ash. The world’s largest known naturally occurring trona deposit, the primary source of soda ash, is a geologic gift to Wyoming. We export nearly $1 billion worth of soda ash, and the industry employs approximately 2,300 workers earning an average salary of $100,000. Next time you drive, remember that your windshield probably contains a part of Wyoming. Just as they do in so many industries, China subsidizes its synthetic and natural soda ash industry creating an unequal playing field for our soda ash companies. President Trump’s continued efforts to establish fair trade policies has benefited this Wyoming industry.”

“These were policies which ruthlessly promoted market changes, not to benefit consumers, but to decrease the use of coal for electric generation,” Gordon wrote.

“President Trump’s efforts have been focused on addressing the real issue: how to intercept and remove C02 from our atmosphere. His support for the funding of Carbon Sequestration Utilization and Storage projects recognizes coal’s role in a reliable, reasonably priced, carbon-emission limited energy future. America’s economy grew because of low-cost electricity from coal for many decades. We have learned better, cleaner ways to use it, and we along with the rest of the world deserve the opportunity to utilize it. Wyoming, like the Trump Administration, is for an all energy cleaner future.”

Gordon added that Wyoming sees opportunities for coal’s use in products used for roads and other construction materials. He said that research indicated that coal and coal ash contained “many critical elements” and that coal had water purification applications.

“President’s Trump’s efforts to enhance US production of such products can only bode well for Wyoming.”

“[This] President recognizes that COVID-19 has drastically reduced demand in the glass market,” Gordon wrote. “His support of a temporary federal royalty rate reduction for soda ash is important to the long-term viability of this industry – a good thing for Wyoming jobs and the local and state revenues they will bring.”

Wyoming could also be the uranium supplier to the US. President Trump’s Nuclear Fuel Working Group (NFWG) pointed out that the US has lost its place as the world’s leader in nuclear energy due to Russian- and Chinese-subsidized markets. That decline is an issue of national security. Once again, the President’s willingness to take on difficult trade issues is welcome. In addition, the NFWG recommended that we expand the existing nuclear fuel supply by 17 to 19 million pounds beginning this year. Finally, the President proposed a strategic uranium reserve in his budget. These efforts could allow the Wyoming uranium industry to create new jobs and help secure our Nation’s uranium supply.

“Wyoming knows best how to manage our waters,” Gordon wrote.

“It’s a fight we have had to continually take up. Malcolm Wallop led the charge 40 years ago and now, thankfully, we have had an Administration which respects our values.

“The regulatory changes we have seen under EPA on two of the most important water matters to Wyoming: repeal of the Obama-era Waters of the United States and replacement with the Navigable Waters Protection Rule and Clean Water Act Section 401 reform, are nothing short of monumental,” Gordon wrote.

“Wyoming thanks the Administration for these bold efforts.”

“They have gone to bat for us on many fronts, from appointing judges more prepared to interpret the law than make it, to understanding decisions are best made closest to the people.”