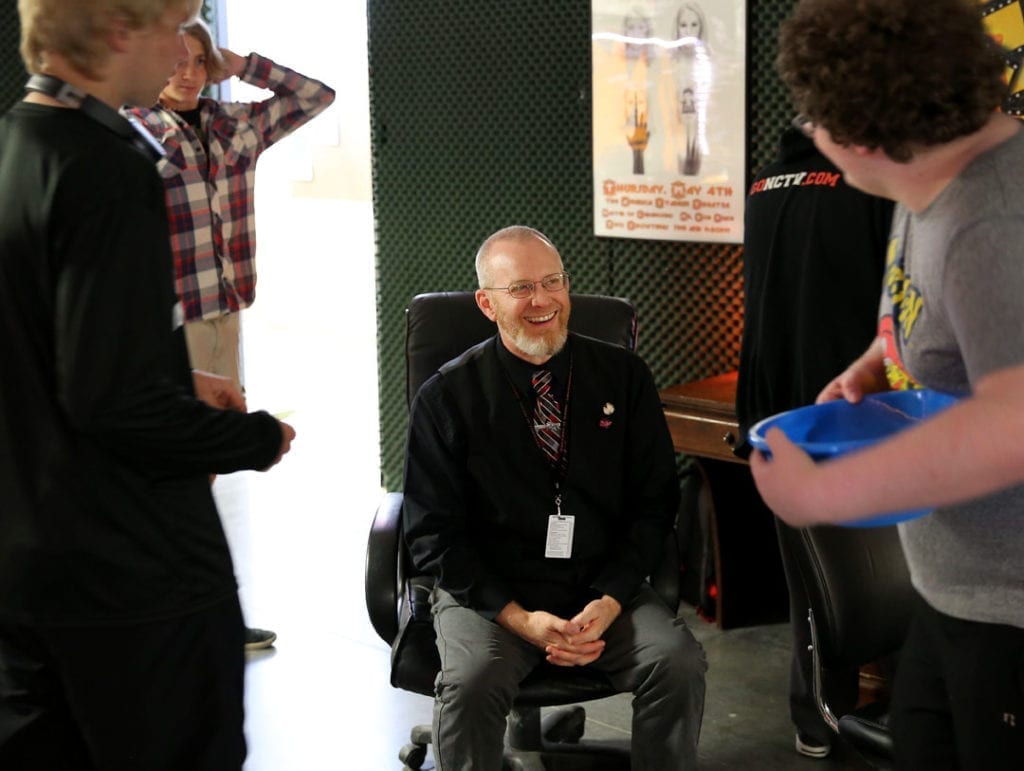 Film and television teacher Lance Madzey laughs with students shortly before class at NCHS in Casper on May 8, 2017..(Dan Cepeda, Oil City)

“With 25 years of experience to his credit, Mr. Madzey has excelled as a film and television instructor at Natrona County School District since 1995,” Marquis Who’s Who said on Jan. 21. “In 1994, he worked for KTWO-Casper in Wyoming as a director, a copywriter, a producer, a videographer and a PSA director. Mr. Madzey began his career as a teacher’s assistant at Columbia College Chicago in 1993.”

In addition to his work in the classroom, Madzey helped put on the “Wyoming Statewide High School Short Film Festival” for 21 years. The May 2019 festival was the last.

“Festival Judges were flown in from Hollywood to screen and judge the student work, and offer workshops in their professional fields,” Marquis Who’s Who adds. “Many student winners have gone onto professional careers all over the world. Madzey produced and directed the feature film, ‘Stanley’ which had its world premiere at the Rialto Theatre in Casper Wyoming in November of 2010.”

“Notably, Mr. Madzey was presented with the Wyoming Association of Broadcasting Award for copywriting in 1995.”

Madzey has directed other films besides “Stanley,” including “The Woman with Centipede Eyes.” That short horror film project shot in Casper brought local talent together with Hollywood power and contributions from people around the country.

“Furthermore, Mr. Madzey received the Making A Difference Award from Natrona County High School in 2015 and the ‘madZ’ Award from Casper Business Community in 2013,” Marquis Who’s Who says. “From 1998 to 2002, he was highlighted in Who’s Who Among America’s Teachers. Mr. Madzey attributes his success to the fact that he found something that he loves and, as an educator, he is able to share his passion with others.”

The school district also talked about Madzey’s induction into the biographical registry, saying that he brings “energy, positivity and encouragement to his classroom every day.”

Madzey shared some thoughts with the school district.

“It is extremely difficult to think of one moment being my favorite as an educator since moments like that are ongoing and sometimes happen daily,” he said in NCSD’s Jan. 27 announcement. “One moment that definitely stands out is when my past student Lucas Lee Graham called me when his feature film had been accepted into the Sundance Film Festival. He was so excited and I was so happy for him.”

“Another moment that stands out is when my past student Justin Howard became the World Air Guitar Champion. The stuff that both boys practiced weekly for NCTV episodes seemed so perfect for them in hindsight. I’m so happy for all my students when they succeed. My parents Dr. Carl and Cherie Madzey were both educators in this town. Their example and wisdom continue to inspire me. It is a wonderful thing to be a teacher and I love it.”

Marquis Who’s Who say that individuals are selected for their biographical volumes based on the following factors:

“Before embarking on his professional path, Mr. Madzey pursued an education at Columbia College Chicago, where he received a Bachelor of Arts in film and television in 1994,” they add. “In order to remain aware of developments in his field, he holds professional affiliations with a number of relevant organizations, including the Wyoming Education Association, the Natrona County Education Association and the National Educational Association.”

Marquis Who’s Who say their first edition was published in 1899.

They say they have “chronicled the lives of the most accomplished individuals and innovators from every significant field of endeavor, including politics, business, medicine, law, education, art, religion and entertainment.”