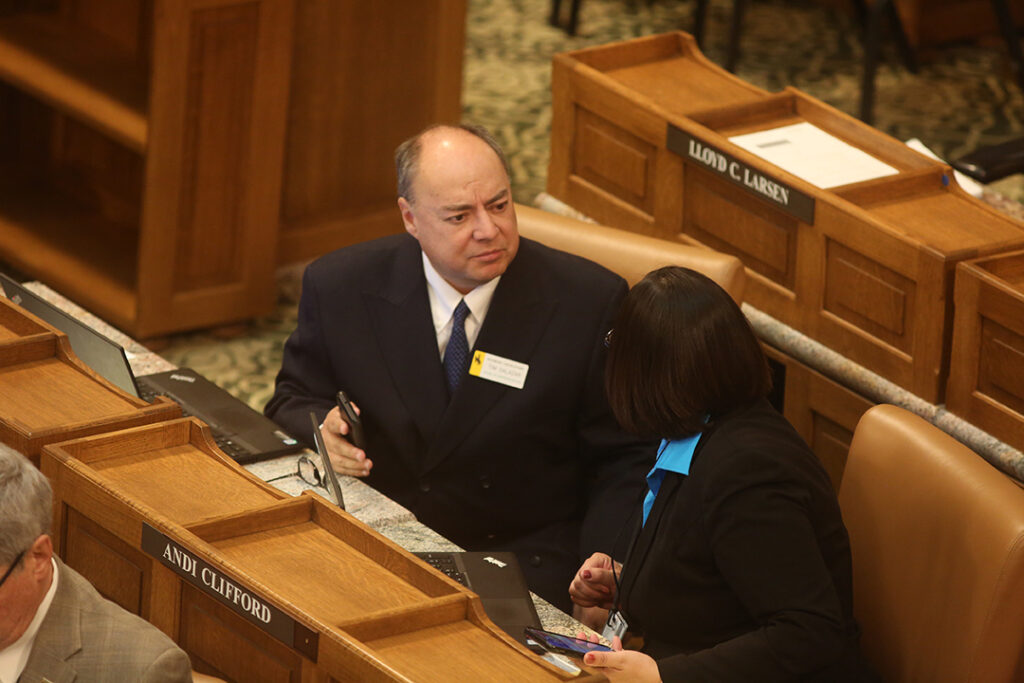 CHEYENNE, Wyo. – Legislators from both the Wyoming House of Representatives and the Senate came together on the morning of Monday, Feb. 17 to discuss one of the most important issues hitting Native American communities.

She was at the meeting alongside Fremont County Reps. Andi Clifford and Lloyd Larsen to discuss SF 8, the missing and murdered indigenous persons bill.

Originally the bill’s catch title didn’t include the specific indigenous categorization, but Ellis told the committee that it was important to make the distinction, since the bill was mainly focused on Native American peoples.

The bill would require the Division of Criminal Investigations to act as a central repository of information and operate a clearinghouse database on missing persons from Wyoming.” It would also require the division to publish an annual report on these missing persons. It is sponsored by the Joint Judiciary Interim Committee.

The Department of Victims Services would have to review criminal investigation reports from the clearinghouse established. The division would also have to provide training on these crimes to various law enforcement agencies and other departments across the state.

The Wyoming Department of Homeland Security would have to employ a public alert system to notify residents of imminent threat by natural disaster or manmade events to aid in the safe recovery of missing or endangered persons in coordination with local, state, tribal and federal law enforcement agencies. DHS would work directly with Wyoming Highway Patrol to operate the alert system. WHP would have to provide an annual report to DCI on the number of times and dates the system was used, certain details about abducted people, whether the abductee was rescued and if the alert system aided in that resolution.

Should the Northern Arapaho and Eastern Shoshone Tribes implement an alert system on the Wind River Reservation, WHP and DHS would be required to assist and coordinate with tribal governments on such implementation.

The bill was introduced in the Senate on Tuesday, Feb. 11, the second day of this year’s budget session. It received unanimous support from the senators to send it to the Judiciary Committee.

During the meeting, Ellis, Larsen and Clifford each spoke on why this bill was so important to the indigenous communities in the state. Clifford explained that as an indigenous person herself, she has heard more stories than she could count about children going missing in tribal communities.

“In the United States, Native Americans are only 1% of the total population,” Clifford told the committee. “And yet, the National Crime Information Center database recorded that 2,758 indigenous women went missing or were killed in 2018. In 2019, it’s estimated close to 3,000 indigenous women went missing or were murdered in the United States. This epidemic is here in Wyoming.”

Clifford added that this bill would give a voice to the voiceless, those endangered indigenous women and children who go missing every single year and are never recovered. She also expressed frustration that there was no solid data about how many indigenous people have been murdered on the Wind River Reservation.

Ellis noted that she hoped by backing this legislation, opportunities will be created to find out how many children are going missing due to endangerment or their own free will. Children who are considered runaways aren’t eligible for the AMBER Alert system, it was noted during the meeting on Monday.

The Division of Victim Services director Cara Chambers testified before the committee on Monday morning, letting the senators know that her department supports the legislation. She detailed that the bill came about following the establishment of a tribal task force. The task force’s first meeting saw more than 50 people from the public, all of whom were passionate about getting more data about endangered persons in indigenous communities.

“This bill can provide justice for the indigenous people who are falling through the cracks,” Clifford said. “The two tribes recognize that legislation of policies supporting indigenous people supports families all over Wyoming.”