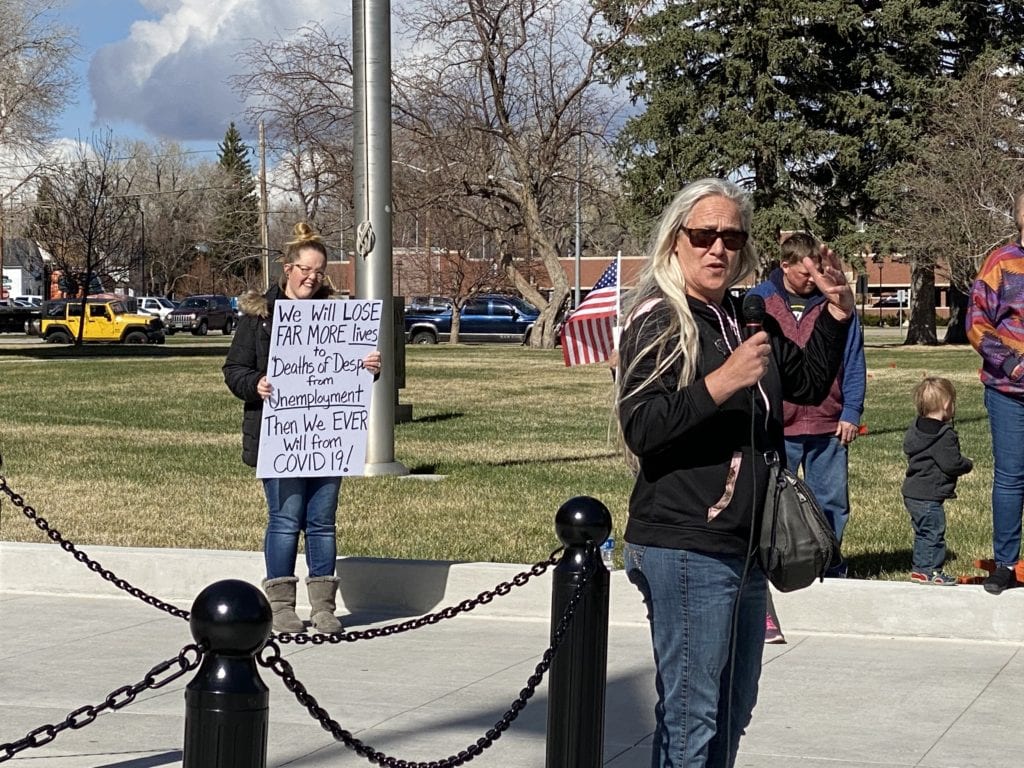 CASPER, Wyo. — The COVID-19 pandemic and low oil prices, combined with a shrinking coal market and oversupply of natural gas is taking a toll on Wyoming’s economy and the workforce in the state.

32,139 new unemployment insurance claims have been filed between March 15 and May 2, according to the Wyoming Department of Workforce Services. Workforce Services Communications Director Ty Stockton says that the state’s unemployment rate would be a better gauge of how many jobs have been impacted by COVID-19, but data for the second half of March and April are not yet available.

A number of large layoffs have been announced in the state in recent weeks, including 130 jobs lost due to the closure of BNSF Railway facilities, 227 layoffs at Powder River Basin coal mines and a 13% workforce reduction by Wyoming Machinery Company.

Multiple people urged legislators to take action to expand Medicaid in Wyoming during a listening session on Tuesday, May 12.

“The state has only begun to witness the economic impacts of the outbreak,” Tate Mullen, director of government relations for the Wyoming Education Association told the legislators. “These impacts are going to be witnessed in every city, every county and every region across the state.”

“They are going to impact every economic sector, including education and including our extraction industries, which have already seen substantial workforce reductions. When access to health insurance or healthcare is tied to a job, the negative impacts to an individual or a family when somebody loses that job are made exponentially worse.”

Mullen said that expanding Medicaid would be a benefit not only to individuals without health insurance, but to those with insurance and to the state overall.

Mullen said that Medicaid expansion would result in state budget savings, revenue gains and overall economic growth by offsetting costs in other areas.

House Minority Floor Leader Representative Cathy Connolly noted that the legislature will be taking a look at possibly expanding Medicaid as they prepare to meet in a special session to consider how to appropriate $1.25 billion in federal Coronavirus, Aid, Relief and Economic Security (CARES) Act qualifying funding which have been received by the state.

While the special session set for Friday and Saturday will focus on things like relief programs for Wyomingites and businesses impacted by COVID-19, the legislature could reconvene at later dates this summer to consider things like Medicaid expansion or capital construction projects as the state learns more about federal guidelines on how CARES Act funding can be spent.

“During this time, more women have been affected by job losses,” she said, noting that people losing their jobs may be losing access to health care as well.

He noted that Wyoming would pay 10% of the new cost of care under the program while the federal government would pay 90%.

The Patient Protection and Affordable Care Act of 2010, also known as Obamacare, provided for the expansion of Medicaid to cover all individuals earning incomes up to 138 percent of the federal poverty level, which amounted to $16,643 for individuals and $33,948 for a family of four in 2017. A 2012 United States Supreme Court decision made the Medicaid expansion voluntary on the part of the states.[8][9]

Mincer said that affordable access to cancer screenings would be another benefit to Medicaid expansion.

Marguerite Herman, lobbyist for the League of Women Voters of Wyoming, also urged the legislature to do something about access to healthcare in Wyoming, noting that as much as 40% of newly jobless workers in the state will be uninsured.

“Stabilize our healthcare system in Wyoming,” she said.

Tom Lacock, associate director of AARP Wyoming, said that his organizations supports studying Medicaid expansion in the state, adding that they would also like the legislature to ensure that people staying at long term care facilities are able to have virtual visitations with family members while in-person visits are restricted during the pandemic.

Eric Boley, president of the Wyoming Hospital Association, also said he thinks now is a good time to consider Medicaid expansion again. He added that with increased layoffs amid the COVID-19 outbreak, there are more and more uninsured people and hospitals are seeing an “increase in bad debt and uncompensated care.”

Boley added that he would like the legislature consider using some of the CARES funding for other aspects of Medicaid.

“One thing that we have seen, and I’m grateful to our state Medicaid officers….they increased the reimbursement in our long term care facilities for the 17 days of March and the whole month of April by $85 per day per Medicaid patient,” Boley said. “For the first time in a long, long time, we basically covered the cost of what it costs on a daily basis to take care of a Medicaid patient. But, that rate went away and has been lowered again starting May 1.”

“I would hope that we could backfill and utilize the CARES money to make sure that we are covering the cost of taking care of our Medicaid patients.”

He added that long term care facilities have seen added costs associated with safety and security amid the outbreak and that the number of admissions have decreased and said the legislature should consider using some CARES funding to support those facilities.