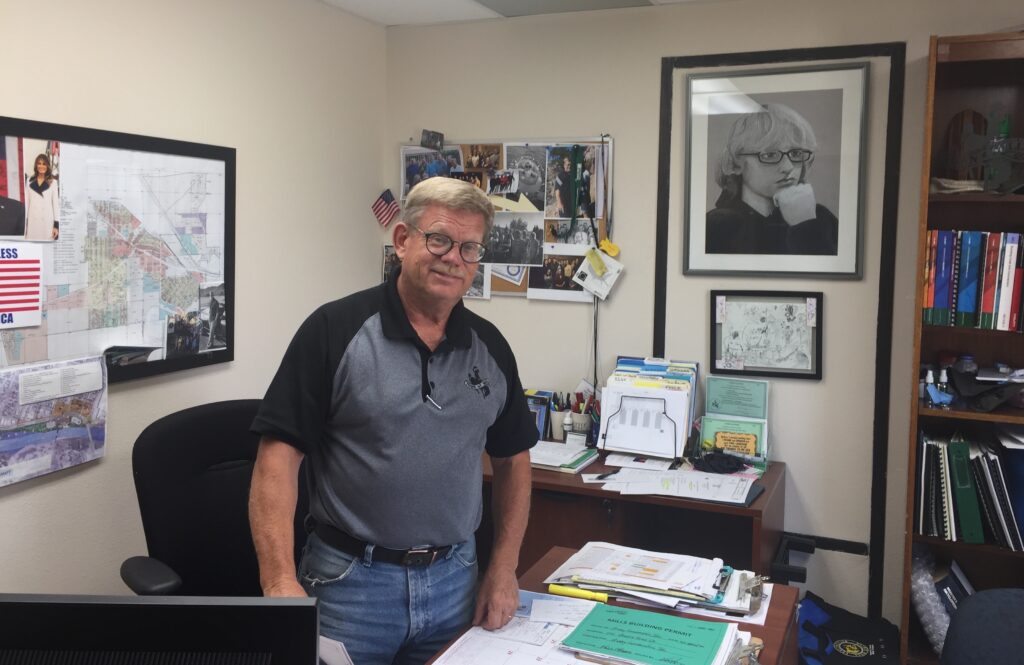 HD 59 candidate and Mills building inspector Kevin O'Hearn at his office, with a self-portrait by his son Aaron. (Gregory Hirst)

CASPER, Wyo. — Kevin O’Hearn’ came to Mills in 1963 with his mother and father and nine siblings. They were on their way to California and stopped to help his uncle build a house.

“I think my uncle pulled out every nail out my dad drove in just to get us to stay,” O’Hearn said at a political forum. Eventually it was time to go back to school, and his mother suggested the family settle in Mills or head out by the weekend. They stayed.

Now he’s the Town of Mills building inspector and assistant town planner, and is running for the District 59 seat in the Wyoming House of Representatives.

“I listen to what the smart people have to say,” he said of his decision-making process, an approach he’d apply while governing at the state level. “I will look at each bill. I don’t believe in rash decisions. I believe in thinking about them and talking them over with all the different people on the committee, listening to the smart people and the people that are in that business.”

O’Hearn is not new to leadership. He joined the Army National Guard in 1980 and served two tours in Operation Iraqi Freedom. He retired in 2012 with the rank of Lieutenant Colonel. He’s owned a small construction and remodeling business for over 30 years and remodeled his companies’ barracks in Takrit.

“I have no political experience or agenda,” O’Hearn said at the political forum.  “Or maybe I do have political experience,” he later qualified. “I’ve sat on a lot of different boards. I was on the 1% [tax fund committee] with [Representative] Pat Sweeney and [Casper City Councilman] Bob Hopkins 5 years ago.”  He also worked on the Eclipse Festival in 2017 with Visit Casper CEO and Natrona County Commissioner Brook Kaufman.

He’s already making further inroads with Wyoming’s leaders. He said that last September he met with U.S. Senators John Barrasso and Mike Enzi and U.S. Rep. Liz Cheney about federal grant funds to make improvements to municipalities, including Mills, to “make it more livable, make it more presentable, make it a destination.”

O’Hearn had also attended conference calls with Wyoming’s Joint Transportation and Military Affairs Committee, which is considering alternatives to the state fuel tax to make up for what the Wyoming Department of Transportation says is an annual $130 million budget shortfall.

He said the committee is considering a Road Usage Charge (RUC) as a fuel tax alternative because modern vehicles are becoming more fuel efficient. The RUC charge would track vehicles and charge based on whether the users were traveling on county, federal, private, or tribal roads. He admitted that tracking vehicles via a chip would likely raise privacy concerns, even if the data is handled by a third-party firm.

“We’ve got to do something with the fuel tax,” O’Hearn said. “I don’t know if RUC is the right way to do it.”

“I want to open up the economy. I want to get back going again,” O’Hearn said of his top priority if elected as a legislator. “We are all essential.”

O’Hearn said he supports legislation that protects businesses and institutions from potential lawsuits that might arise from plaintiffs who caught COVID-19 while out and about. “That’s why a lot of people are saying ‘don’t open.’”

He has a few specific ideas on the issue of Wyoming’s  budget. He is in favor of reinstating the food tax, but would keep the state sales tax at 4%, with the optional fifth-percent only available for special projects voted for by citizens every 4 years.

He also said “The school district administration is a little heavy. There’s too many administrators and not enough teachers.” While legislating, he said he’d rely on “the smart people to tell me where they can see cuts being made and where broad waste and abuse is happening.”

He’s confident he’d be able to work with all parties to find the solutions to tough problems. “In the military I briefed enlisted men and general officers alike,” he said in a written statement.  “And in the civilian world I meet daily with homeowners, renters, contractors and developers and listen and try to work out solutions that meet everyone’s needs.”

On his reasons for running for office, he said, “I see a need: I see what is happening elsewhere in larger cities and more populated states and I’m not impressed. I believe in sound and fiscally-responsible management of people, equipment and all assets across the board.”

O’Hearn has six children, including a son who is stationed in Japan in the Air Force. He and his wife attend Our Lady of Fatima Catholic Church and often walk together from home.

He took a carpentry class in high school and the next year helped his instructor build a brick four-plex on Beverley Street. To keep advancing as a commissioned officer in the Army, he picked up enough credits for a bachelor’s degree in science, studying at Montana State University, Excelsior College, and University of Wyoming Extension.