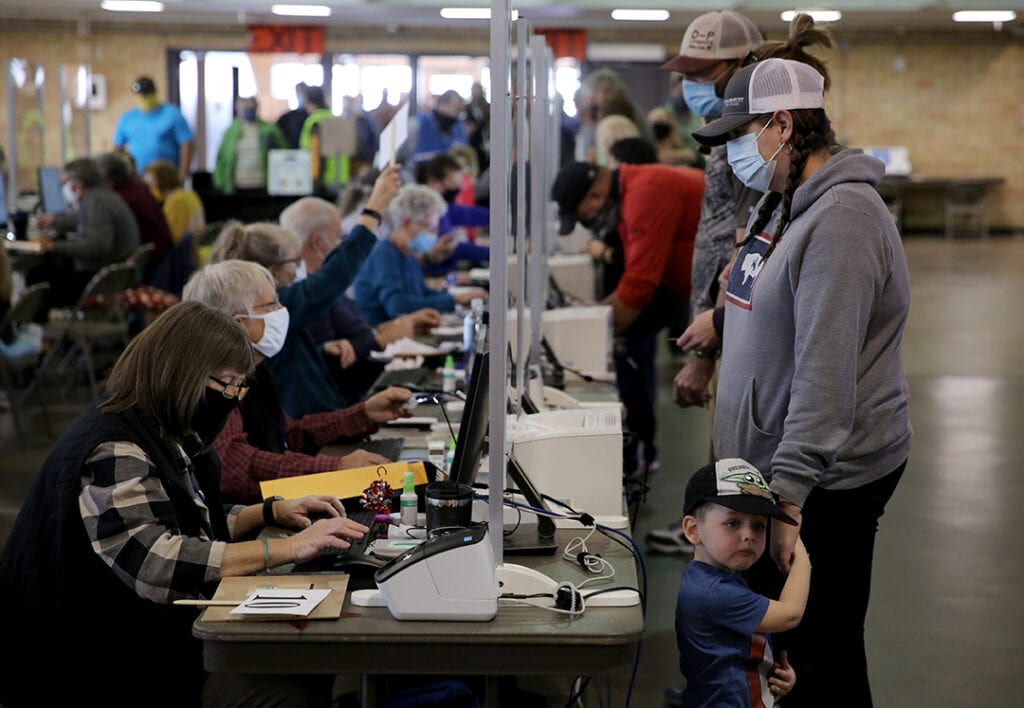 CASPER, Wyo. — A number of Wyoming legislators are calling for an amendment to the United States Constitution to better regulate political spending.

Political spending reached a record $14.4 billion in the 2020 election, “more than doubling the total cost of the record-breaking 2016 presidential election cycle,” OpenSecrets, which is run by the Center for Responsive Politics, reported last week.

In the Wyoming elections in 2020, candidates and committees raised a total of $8,145,256, according to FollowTheMoney.org (run by the National Institute on Money in Politics and The Campaign Finance Institute).

“The Senate Leadership Fund, aligned with GOP leader Mitch McConnell, spent nearly $294 million,” OpenSecrets said. “The Senate Majority PAC, led by Democratic leader Chuck Schumer, was right behind with $230 million in spending. Prior to the 2020 election, no group had spent $200 million in a single cycle.”

“Super PACs are supposed to be independent of candidates and lawmakers, but weak enforcement of coordination rules has emboldened party leaders to use them as an unlimited spending arm of the party. That trend has extended to presidential candidates too. Trump held a fundraiser for pro-Trump super PAC America First Action while Biden subtlety directed donors to his preferred outside group.”

“Dark money” is also increasingly being injected into elections. This term refers to money spent on elections where the source of the funding is not disclosed as groups take advantage of loopholes in disclosure rules.

“Each of the top 7 super PACs were partially funded by dark money,” OpenSecrets said. “Pro-Biden groups like Future Forward USA and Priorities USA Action were bankrolled by nonprofit affiliates that share the same name and staffers. Instead of directly spending money on ads, dark money groups are increasingly finding new ways to inject secret money into elections.”

Wyoming ranks toward the bottom of the nation in terms of independent spending disclosure requirement rules across the country, according to assessments by the National Institute on Money in Politics.

Six Wyoming legislators are sponsoring House Joint Resolution 5 for consideration during the 2021 General Session. The proposed resolution, which is catch-titled “Protecting Wyoming citizen’s voices,” would urge the U.S. Congress “to propose a constitutional amendment allowing Congress and states to regulate political spending to ensure free and fair elections and to empower the voices of Wyoming human citizens.”

The proposed resolution says that the U.S. Supreme Court has ruled that both Congress and states “lack authority to ban independent corporate expenditures to political campaigns for public office, relying on the concept that the spending of money to elect a candidate is protected speech.”

“This United States Supreme Court precedent has allowed for the creation of super political action committees in campaigns for public office, which have made possible unregulated campaign expenditures in unprecedented amounts,” the resolution states. “Much of this flood of unregulated campaign spending is contributed and controlled by individuals not residing in Wyoming and whose political goals may partly or wholly differ from those of Wyoming residents.”

The proposed resolution states that “corporations have privileges not enjoyed by natural persons, such as limited liability, perpetual life and favorable treatment of their accumulation and distribution of assets, which have enabled these entities to financially overwhelm individual natural persons in the political process.”

Regulating political spending would help ensure all citizens are able to have their political views heard, the resolution argues. Since an amendment to the U.S. Constitution would overrule the Supreme Court precedent, the proposed resolution would urge Congress to propose and amendment and send it to states for ratification.

The resolution would call for an amendment that would clarify “the distinction between the rights of natural persons and the rights of corporations, unions and other non-human legal entities and providing that Congress and state legislatures may regulate all monies raised and spent for political purposes.”

Sponsors of the proposed resolution include: