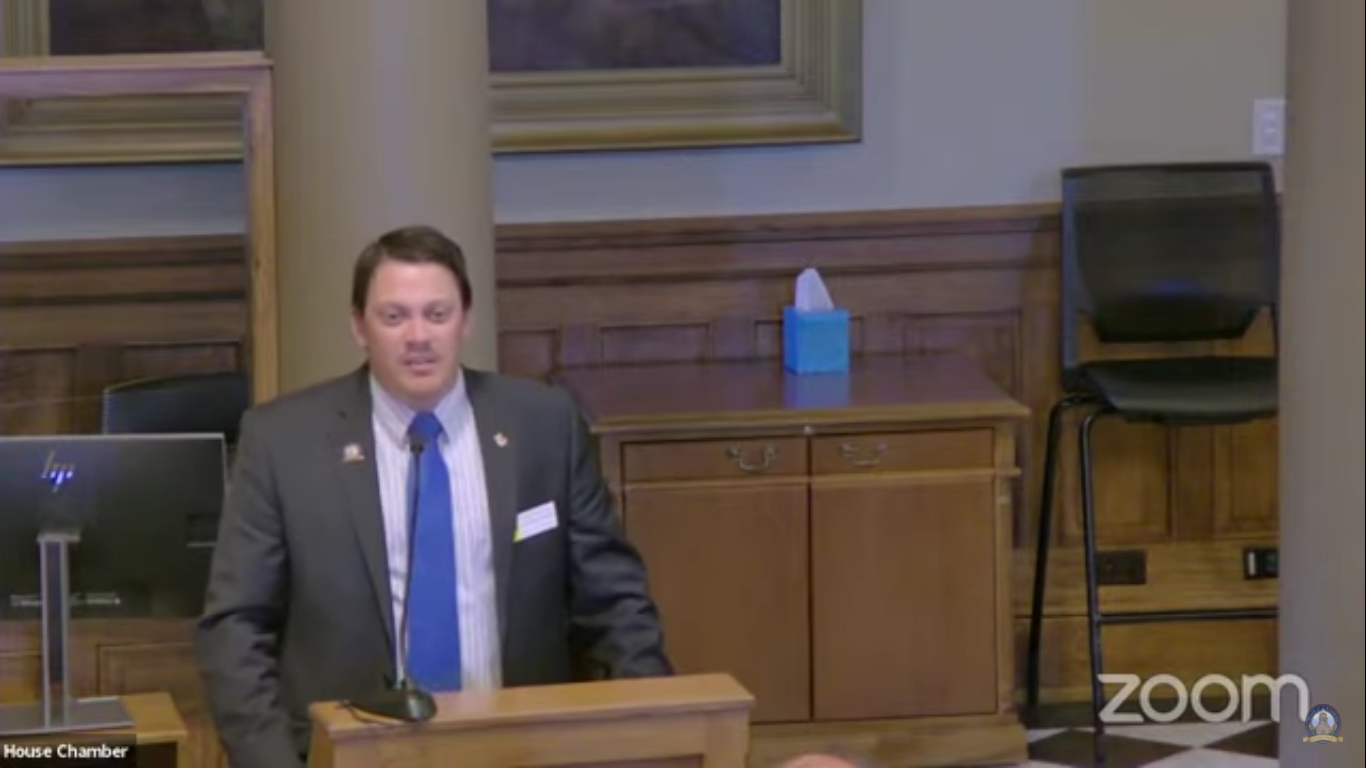 CASPER, Wyo. — While working on a bill that would prohibit employers from requiring employees to get COVID-19 vaccinations as a condition of employment, the Wyoming House of Representatives on Thursday debated how far members want to go in terms of opposing federal vaccine mandates via the legislation.

House Bill 1001 contains language that would have the Wyoming prohibitions removed should challenges to federal COVID-19 vaccine mandates in the courts fail.

Rep. Chuck Gray (Natrona County) proposed an amendment that would remove this language such that the bill would contain no language to have it automatically repealed should a federal mandate come into effect.

Gray said he views efforts by the President Joe Biden administration to implement vaccine mandates as “the biggest attack to our constitutional Republic in my lifetime, and I believe that.”

He said he thinks that the Biden administration’s approach to the forthcoming vaccine mandates (rules for which are still awaiting finalization) as dictatorial in nature.

In Gray’s view, removing the language to have Wyoming’s prohibition on employer-issued vaccine mandates if federal rules require employers to issue such mandates would not force employers to choose between following either state law or federal law.

He argued that there is not a need to include the repeal language because the matter of whether a federal mandate or state law would take precedent could be handled in the courts.

He said that sending such a message would “hopefully cause [the Biden administration] to back down.”

Gray argued that the Supremacy Clause should not apply because he does not think the Biden administration has the constitutional authority to issue the vaccine mandates for private employers.

Majority Floor Leader Albert Sommers (Sublette), on the other hand, said that his feeling of opposition to Gray’s proposed amendment is some of the strongest opposition he has held during his time in the legislature.

He argued that having state law in place restricting private employers from issuing vaccine mandates in opposition to a federal mandate requiring that employers mandate that their employees get vaccinated would put private employers in a position of having to choose to break either state or federal law.

Depending on how the federal vaccine mandate rules are applied, private employers such as in the health care field could find themselves facing the threat of having federal dollars withheld if they choose to follow Wyoming’s law.

Sommers said that he doesn’t support federal mandates but that they are a reality and he doesn’t want to potentially bankrupt hospitals or other health care entities if they were to see federal dollars withheld.

Rep. Landon Brown (Laramie County) said that he also opposes the idea of federal vaccine mandates but thinks that sending a message in the manner Gray was proposing would be counterproductive.

He said he thinks that the Biden administration’s vaccine mandate likely oversteps the 10th amendment to the U.S. Constitution (which reserves powers not delegated to the federal government to the states) but that this is a matter that would be adjudicated through the judicial branch.

Brown argued against Gray’s amendment: “For us to pull out and say we don’t care what the federal government says is akin to calling for secession.”

“You are saying at this point that you would rather give the shake of the fist in the air to the federal government and risk everything we have in line with the federal government just to fight this vaccine mandate,” Brown continued. “Which, need I remind all of us in this body, does not exist yet. We do not have a mandate yet. We are swinging our arms in a dark room hoping we connect with something.”

“This is so far out of reach for what this body should be deliberating.”

Rep. Tim Hallinan (Campbell), on the other hand, said he supported Gray’s amendment. He said that he does not perceive the bill as a challenge to federal action, but rather as an attempt to establish law for Wyoming.

Hallinan said that he does not think the proposed law would force hospitals to lose money if a federal vaccine mandate applies to them.

“They can go ahead and follow federal mandate until it is overturned by the courts,” Hallinan said. “Our hospitals will not go broke.”

Rep. Chip Neiman (Crook, Weston) said that he thinks the legislature should be concerned about protecting freedom rather than trying to prevent the loss of money.

“It all boils down to money,” Neiman said. “We are all here trying to figure out how we can keep from poking the bear and losing our money.”

Neiman said he thinks it may be necessary to give up security that financial support provides in order to stand up for freedom, adding that he thinks there is some fear among legislators that the federal government will jerk funding sources relied on in the state.

He asked what would have happened if civil rights activist Rosa Parks had not chosen to take a stand against bus segregation.

“Somebody has got to stand up,” Neiman said.

When he spoke for his second time on the proposed amendment, Fortner said that he thought federal funding may have once been a good thing for the state but that he thinks a reliance on federal dollars may have led the state to move away from wise spending. He asked why funding for things like hospitals, roads and schools shouldn’t be left to the private sector.

“Why in the world do we involve the government in all these things?” Fortner asked.

He added that with federal debt north of $28 billion, Wyoming might be setting itself up for disaster in relying on federal dollars.

“When they go down, we really go down,” Fortner said.

Rep. Sue Wilson (Laramie County) said she was against Gray’s amendment. She said that her concern is not that the federal government will take money away in a way that directly affects her or her business, but rather that the legislature could be jeopardizing federal revenue streams crucial to health care providers in the state.

She said that she thinks it is easy for legislators to talk about waiting for the courts to decide on federal mandates since they don’t have a financial stake in the consequences of that waiting game like hospitals and health care providers do.

Rep. Jerry Obermueller (Natrona) gave examples of how Wyoming has historically relied on federal funding. He noted that its very existence as a state is contingent on the federal government’s decision to purchase land in the Louisiana Purchase. He also pointed to federal investment in the transcontinental railroad as well as the Homestead Act, under which the federal government allowed citizens to claim public land for themselves, as central to Wyoming’s development.

Obermueller asked where funding would come from that if the state were to lose much of its federal funding streams, adding that if Wyoming citizens were asked to fill those coffers, their taxes would need to increase significantly. He noted that federal dollars flowing into the state total more than all the taxes individuals in Wyoming pay to the state.

He said that he thinks that cries to stand up against the federal government will diminish if federal funding streams start to dry up.

“When the money stops flowing, this dance will certainly stop,” Obermueller said. “The brinkmanship will come to a screeching halt. We can play these games and then eat crow later or we can bow out gracefully now because bottom line: we need, we like and we depend on those federal dollars.”

Rep. Mark Jennings (Sheridan) said that he thinks the state needs to draw a line somewhere to stand up against federal mandates. He said that Wyoming voters might potentially be willing to see their taxes significantly increase if it meant the state was not subject to federal overreach.

“Maybe we would be willing to double our taxes if we could still remain free,” he said.

Rep. Karlee Provenza (Albany) suggested a different interpretation of the definition of freedom. She questioned whether jeopardizing federal funding that could lead to hospitals and schools closing or risking funds needed for highways was really a way to make people more free. Should a hospital disappear due to a lack of funding, Provenza asked her colleagues to think about whether a citizen who had relied on that hospital would really be more free.

“Are they free if they have to die because they don’t have access to medical care?” she asked.

Rep. Lloyd Larsen (Fremont) also raised concerns about taking a stand in a way that could jeopardize federal funding streams. He also pointed out that the legislature is considering doing something it is criticizing the federal government for doing — putting restrictions on what the private sector can do in terms of vaccine mandates.

Rep. Clark Stith (Sweetwater) expressed his opposition to Gray’s amendment succinctly: “Respect for rule of law does not make us weak and passing a bill that is unconstitutional does not make us strong.”

The legislature defeated Gray’s proposed amendment on a vote of 18-40. The vote on that amendment was as follows:

While that amendment was defeated, the House has adopted a number of amendments to House Bill 1001. That bill passed in the House on second reading and would need to be passed on one further reading before it would move to the Senate for consideration.