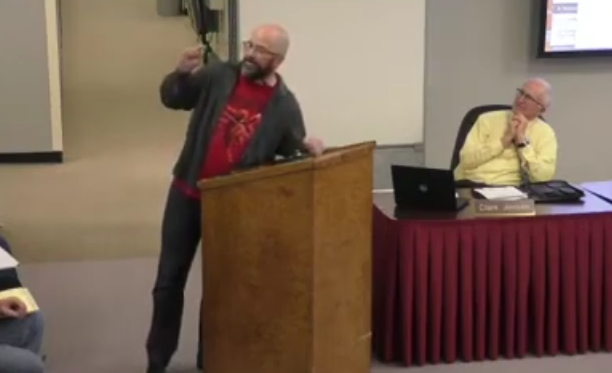 CASPER, Wyo. — Dozens of people spoke on Monday regarding whether three books should be banned from Natrona County School District school libraries.

While opinions diverged regarding the banning of books, members of the school board and others expressed a sense of confidence in the community’s ability to discuss the matter civilly in a public forum.

“I thank all of you for the respect that you had for one another,” Trustee Kyla Alvey said, adding that she was particularly encouraged by the bravery of students who got up to speak at the meeting: “What a testament of this district to see those students.”

Trustee Kianna Smith said that she thought people made good comments on both sides of the debate and added that the public should always feel comfortable sharing perspectives at public school board meetings: “It should be an expectation that we listen to you and that is something that I don’t take lightly as an elected official.”

Trustee Clark Jensen also expressed appreciation at the quality of the conversation: “Civil discourse is really, really important and so thank you all, it was a good evening.”

The trustees were not alone in expressing optimism about people participating in the public meeting. Natrona County High School theater instructor Zach Schneider said during the public comment period of the meeting that the “fact that this many people are so engaged in kids’ education is so amazing.”

On the other hand, Schneider said that he thinks people’s interest in public education should go beyond getting involved only when hot button issues arise: “It cannot be because you are being whipped into an emotional frenzy by forces outside of our community.”

He added that he thinks the community is capable of having discussions around difficult topics together even when there are differences of opinion: “I believe that in Casper we can have conversations as neighbors.”

As a theater instructor at NC, Schneider said part of his job is facilitating conversation.

“Theater is the study of life, of human history,” Schneider said. “I deal with these conversations all the time.”

Schneider said that he sometimes engages students in conversation about Greek plays, many of which contain narrative elements that some might consider controversial, addressing some of his comments to Trustee Debbie McCullar, who was own his English teacher in the ninth grade.

“Oedipus, ladies and gentlemen, did some unspeakable things,” Schneider said. “As did the women in ‘Lysistrata.’ Shakespeare? ‘Romeo and Juliet,’ Ms. McCullar? Mercutio? Every joke he says is dirty.”

Books which some parents have raised concerns about include:

Schneider said that in his opinion, none of the titles meet the criteria needed to be considered obscene under a U.S. Supreme Court test for obscenity. The court set up an obscenity test in a 1973 decision that established the following guidelines, according to the Freedom Forum Institute:

“To meet the test of obscenity it has to meet all three of those things,” Schneider said.

NCSD Superintendent Mike Jennings said on Monday that the district has a process in place to review materials when concerns about their appropriateness for children are raised. Jennings said that Associate Superintendent Walt Wilcox had approached parents who raised concerns after a meeting in December to bring material from the works they are concerned about for review.

NCSD Administrative Regulation 6132 describes how the district delegates authority to professionals at the school level to select library and other resources. The regulation also sets out a process for review when complaints are raised.

The regulation procedure asks that schools receiving complaints attempt to first resolve issues informally though informing the NCSD Curriculum and Instruction Division when complaints are filed.

People can also file formal complaints by requesting a copy of the district’s “Request for Reconsideration of Learning Resources” form. That form is also available online.

“The ‘Request for Reconsideration of Learning Resources’ form shall be signed by the questioner and filed with the principal,” the regulation states. “The request for reconsideration shall be referred to the Superintendent or his/her designee.”

When formal complaints are received, the superintendent is tasked with appointing a reconsideration committee that is to include “the following membership as appropriate”:

The committee is expected to be formed and meet within 20 days of a formal complaint being received.

The committee can do the following when reviewing material:

“The decision of the reconsideration committee is binding for the entire District for a period of two (2) years.; therefore, no materials, which have been formally reviewed, shall be reconsidered for a period of least two (2) years,” the administrative regulation states. “Notwithstanding any procedure outlined in this regulation, the questioner or staff members using the material shall have the right to appeal any decision of the reconsideration committee to the Board of Trustees as the final review panel.”