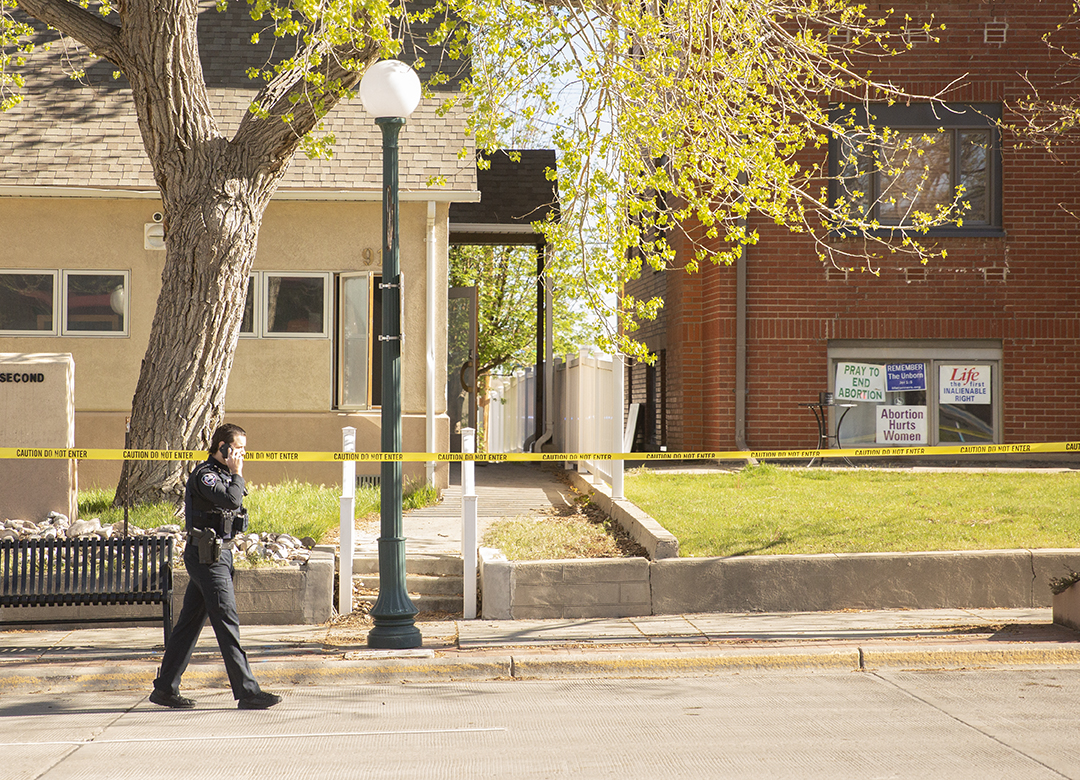 A Casper Police Officer stands in front of the Wellspring Health Access clinic on Wednesday, May 25, in Casper after suspected arson and vandalism occurred. (Dan Cepeda, Oil City News)

CASPER, Wyo. — On Friday, the United States Supreme Court ended constitutional protections for abortions that were put in place a half-century ago.

“This is the first time that a cluster of rights previously determined to have been constitutionally guaranteed have been withdrawn,” she said on Friday morning. “That’s just flat wrong.”

Ifland is a member of the advisory board for the Wellspring Health Access clinic in Casper, which plans to offer abortions and other women’s health services. The building was vandalized by fire last month, which is still under investigation.

“[The decision] discriminates against people who can’t travel, people who have children who need to be cared for, people who don’t have the money to travel. It’s discriminatory,” Ifland said.

Ifland remembers the feeling of becoming pregnant with few resources or options before Roe v. Wade was decided in 1973.

“It’s terrifying to suddenly find yourself pregnant, despite having tried to not become pregnant, and to not know where to go, who to get help from, how you’re going to manage your life,” she said.

For years, Ifland has been an outspoken progressive voice in a state with strong Republican ties.

On news of the decision, Wyoming Sen. John Barrasso said in a statement that “the U.S. will no longer have the same anti-life laws as countries like communist China & North Korea.”

Sen. Cynthia Lummis said in a statement: “The states should decide how to approach abortion. I’m grateful for this pro-life decision from the Court today.”

Rep. Liz Cheney, who is facing a difficult primary challenge from Harriet Hageman, said on Twitter: “I have always been strongly pro-life. Today’s ruling by the Supreme Court returns power to the states and the people of the states to address the issue of abortion under state law.”

During this year’s Wyoming Legislative session, lawmakers passed a “trigger law” that could ban abortion if Roe v. Wade was overturned. The ban would require a review from the state attorney general and would then have to be approved by the governor.

Ifland says Wyoming’s strong health privacy laws could be used against the decision, which she says the health clinic board will pursue.

“The Wyoming Constitution has strong protections for Wyomingites’ bodily autonomy,” Circle of Hope’s director, Julie Burkhart, said in a statement Friday morning. Circle of Hope is operating the Wellspring clinic in Casper.

Whatever happens, Ifland blames politicians for using abortion as political fodder over the past three decades, starting with the Reagan administration.

“This issue has been used to divide the country,” she said. “This is the one that really splits us.”