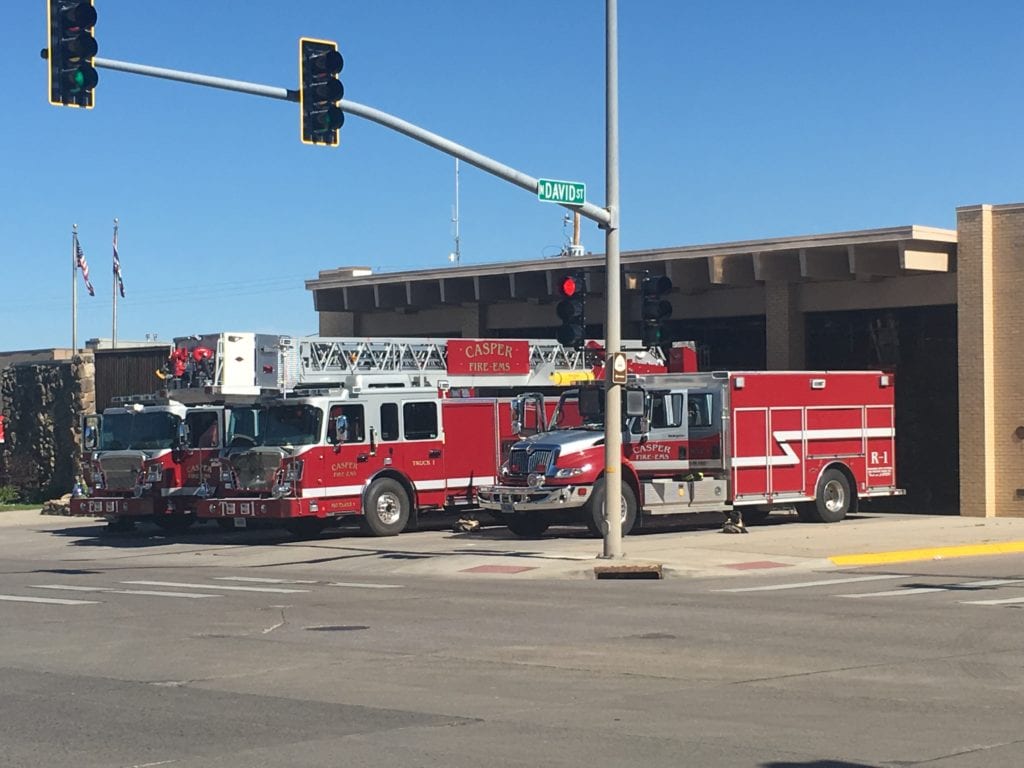 Fire Station No. 1 is among the city's facilities in need of some attention, a recent citywide assessment of City of Casper buildings found. (File, Oil City)

CASPER, Wyo. — The City of Casper has historically relied on “one-cent” optional sales tax revenues for the construction of new fire stations.

While the city is proposing $1 million in one-cent revenues to go toward the design of a new station to replace the aging Fire Station 1 assuming voters approve the countywide tax this November, it isn’t looking to fund the ~$11 million construction of the new station during the upcoming four-year one-cent cycle, City Manager Carter Napier told the City Council on Tuesday.

The city anticipates its share of one-cent revenues will total around $64.5 million over the next four years should voters renew the tax. City staff’s proposal would allocate $4.805 million of that to the Casper Fire-EMS Department.

Bigger chunks of the one-cent revenues would go toward maintenance of Casper streets, water and sewer systems, public building repairs, and the Casper Police Department. The following are the top five funding areas under staff’s proposal for one-cent over the next four years:

The $21.8 million for streets would be an increase from the $19 million allocated to streets during the current four-year one-cent cycle. However, some councilmembers want to find ways to direct more money toward streets to ensure the citywide “Pavement Condition Index” score of 59 doesn’t drop. About $2.8 million beyond the $21.8 million would be needed over the next four years to achieve that goal.

The $6.095 million for public building repairs is proposed in part as a response to a recent assessment of 127 city-owned facilities that found city-owned buildings need about $33 million in repairs. That study did not rely on invasive techniques to assess the condition of internal building systems like pipes, electrical or HVAC. Some of the $6.095 million would help fund equipment to conduct more extensive assessment of such internal building systems and address repairs as deemed necessary, Parks, Recreation and Public Facilities Director Zulima Lopez told the City Council on Tuesday.

The Casper Fire-EMS Department had a total of $20.5 million in potential requests for use of one-cent revenues over the next four years, including the $11 million for the construction of the new Fire Station 1, Interim Fire Chief Jacob Black told the City Council.

That $20.5 million was scaled down to the $4.805 million request for the upcoming one-cent cycle, with the Fire-EMS Department recognizing the total request would not be realistic given the projected one-cent revenues and the range of other city services needing support from the tax revenues, Black said.

At some point the Fire Station 1 replacement needs to happen, Black said, noting that $250,000 has been spent on maintenance projects at the station over the past three years. That included a new roof system and repairs to flooring. Asbestos and black mold were encountered during some of the work, which led to mitigation costs, the interim fire chief added.

The need to eventually build a new fire station is why $1 million is being requested for the design of that facility, Black said.

Fire-EMS’s $4.805 million one-cent request asks for money to replace some apparatuses, including $1.25 million to purchase a new “quint” fire truck to replace Engine 5. A quint fire truck is a combination of a ladder truck and fire engine, featuring the equipment of the former vehicle and the water-pumping abilities of the latter. The new truck would be operated out of Fire Station 5, according to Black. Engine 5 is a 2014 apparatus that has reached the end of its expected service life.

$750,000 would be allocated to replace Engine 1, which is also a 2014 apparatus at the end of its service life expectancy, Black added. $400,000 would be allocated to replace Brush 5, a 1994 apparatus. $175,000 would go toward purchasing two support vehicles used by deputy fire chiefs and a new support vehicle for the fire chief as the department doesn’t currently have a vehicle for the chief, Black said.

While the Fire-EMS Department considered asking for $1.5 million to replace Truck 1, Black said the department will look to get some more time out of the existing apparatus and reduce the department’s overall one-cent request.

$300,000 of the Fire-EMS Department’s request would be to replace six cardiac monitors as they reach the end of their expected service life.

$400,000 would be used to replace extrication equipment and $150,000 would go toward replacing a rescue platform raft.

A new air compressor would be purchased for around $85,500 under the Fire-EMS request. The department needs another compressor, which would be placed at Station 3 to refill self-contained breathing apparatus bottles, Black said.

$22,000 would be allocated toward the purchase of an extractor and gear drive needed at Station 5, which help with washing out chemicals, Black said.

The Fire-EMS Department has other needs, but will seek grant funding opportunities or other money as there won’t be enough one-cent money to meet all the needs of every city department, Black said.

The City Council will continue its discussion of setting priorities for use of one-cent funding over the next four years at its July 12 work session. Once the City Council agrees on a set of priorities and funding levels, it will formally consider a resolution to establish those priorities during a regular meeting. Napier described that resolution as a commitment to residents as to what will be done with one-cent revenues over the next four years should voters approve the optional sales tax.

Staff’s proposal for use of one-cent revenues over the next four years can be reviewed in the following document: