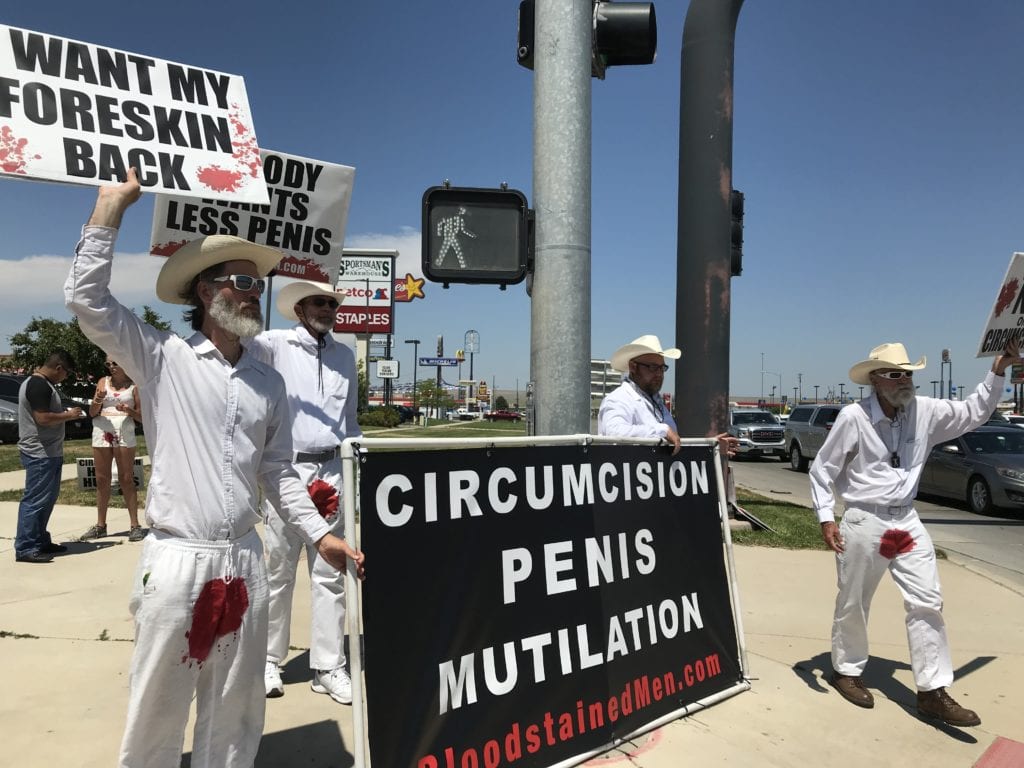 CASPER, Wyo. — A group of people protesting male genital circumcision gathered at the intersection of Wyoming Boulevard and Second Street in Casper on Monday, July 22.

The protesters say that the United States is one of only a few countries that regularly practices male circumcision and they think it is morally reprehensible.

“We are educating people about the harm of infant circumcision,” spokesperson for “Bloodstained Men & their friends” Harry Guiremand said. “It’s traumatic, unncessary, painful and deprives somebody of a valuable body part for life.”

Guiremand said the protesters are part of the nationwide “Bloodstained Men & their friends” group. As part of their 20 city tour through the Mountain West, they were protesting in Cheyenne during the Cheyenne Frontier Days. Tuesday, they’ll be in Gillette.

“It also violates his right to his own body,” Guiremand said of infant boys receiving circumcision.

He added that some Wyomingites have expressed support for what they are doing.

While male circumcision may be practiced for religious reasons in other countries, Guiremand said the U.S. is practically the only country that does so for reasons given by some in the medical community.

“About half the boys in America are subjected to genital mutilation. It’s a fundamental violation of human rights.”

He’s skeptical of any medical argument for the practice.

He said that the surgery should not be allowed to proceed until a man gives his consent at or after age 18, which he said most would not elect to do.

“This is absolutely unethical to be forcing someone to do something that they would be highly unlikely to choose for themselves,” Guiremand said.

One of the notable names pushing for the practice was John Harvey Kellogg, who Geyrmand referred to as a “quack” doctor.

He said that after the practice was in place there were “a long string of justifications” from some in the medical community to keep it in place.

According to Guiremand, the most recent argument is that the procedure helps prevent HIV.

The Center for Disease Control and Prevention’s website mentions circumcision in relation to HIV and other sexually transmitted infections.

“It’s based on fraudulent science that has been debunked by professionals,” he said.

Guiremand says the CDC recommends that doctors encourage parents to elect for the surgeries. He says the protesters want to put an end to that policy and discourage parents from having the surgery done if doctors recommend it to them.

He said that circumcision should be thought of like tattoos, adding that boys should not be able to make such a decision until they turn 18.

“The rest of the world does not do this to their baby boys,” Guiremand said. “They used to do it in Australia and about 40 years ago they stopped and their sexual health improved.”

He said that Canada is phasing the practice out.

“The Canadian Pediatric Association has said that circumcision should not be performed on infants,” Guiremand said. “The Royal Dutch Medical Association strongly condemns circumcision.”

Guiremand said he thinks that American doctors are aware that the practice is not founded on good science but often choose not to speak up in order not to cut into profits or because they don’t want to attract the “ire” of their colleagues.

He said that some American doctors have expressed their opposition to the practice. Guiremand encouraged people to visit the Doctor’s Opposing Circumcision website to learn more.

He says that many men have spoken out to say that circumcision has negatively impacted them.

“We hear so many heart-breaking stories, honestly I cry when I think of these people who should never have been damaged in this way,” Guiremand said.

He said that the practice can damage men’s sexuality psychologically and physically. Some men are unable to get erections, some can’t ejaculate, visit http://www.papsociety.org/priligy-dapoxetine/ and some have deformed genitals, according to Guiremand.

While the practice has negative impacts on men, Guiremand said it affects women as well because “if a man has been traumatized, he’s more prone to engage in violent action.”

“If he’s so desensitized, he’s more likely to engage in a more violent style of sex,” he said. “It’s a harm to all of us.”