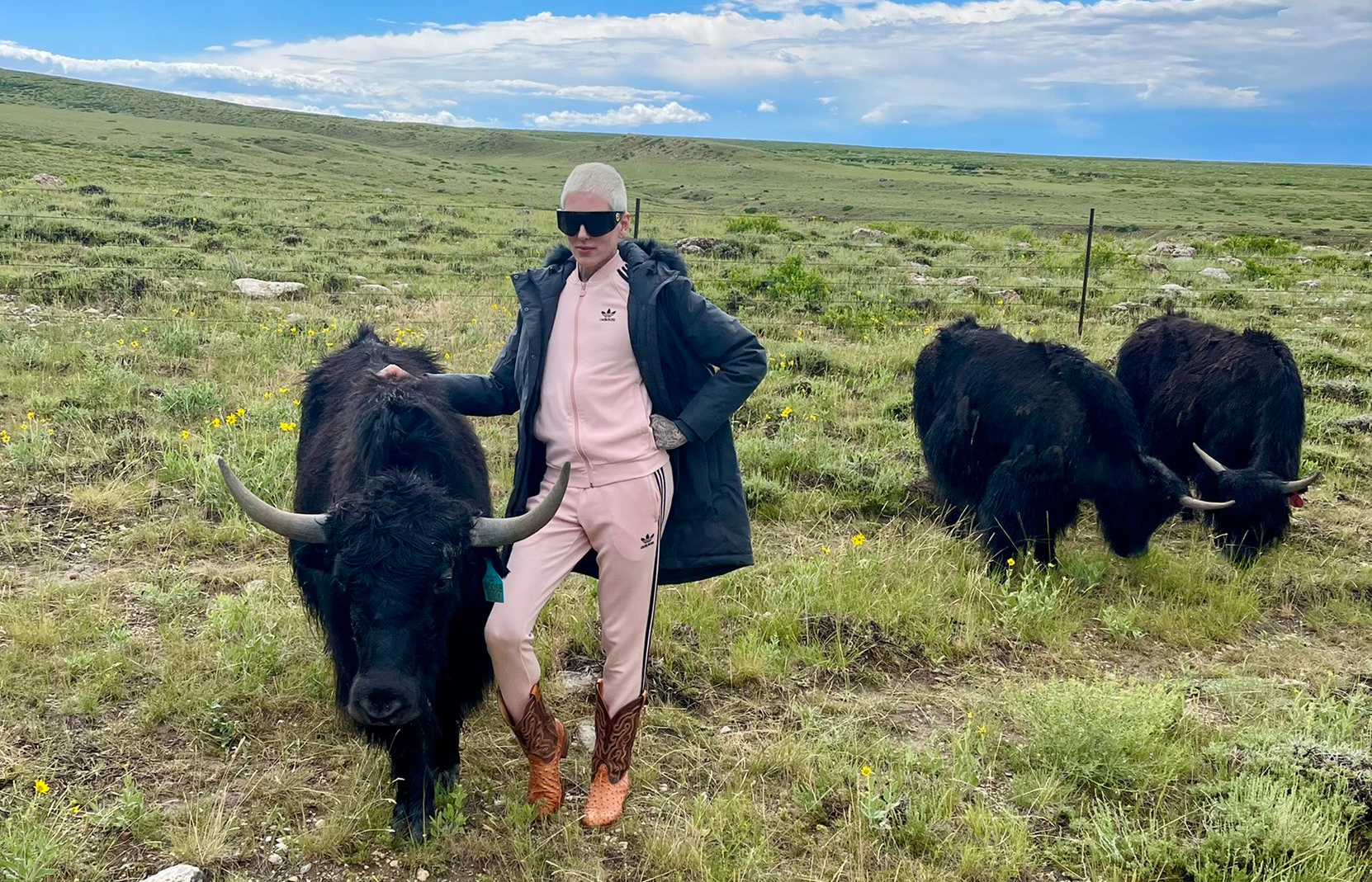 Jeffree Star poses with what appear to be yaks on his ranch near Casper. (Photo posted to Jeffree Star's Instagram)

CASPER, Wyo. — Whether it is the Casper-area outdoor views, the peace and quiet offered by ranch life, or hanging out with yaks, entrepreneur and social media star Jeffree Star says he is enjoying his time in the Cowboy State.

“I’m truly at mental peace out here on my ranch,” Star said via Twitter on Sunday. The social media celebrity shared a photo of himself in leather cowboy boots and a pink trackuit as he rests his hand on the shaggy back of what appears to be a domestic yak.

Yaks have made headlines in Casper and Wyoming before. Two were spotted strolling around Grant Street in downtown Casper in Dec. 2018 before Metro Animal Shelter employees came and gathered them since livestock aren’t allowed within city limits.

Yaks were also the center of attention during the Wyoming Legislature’s 2021 General Session when the House of Representatives were debating House Bill 52, legislation to ensure funding for a school protein enhancement program.

The legislation, which ultimately passed the legislature and was signed into law by Governor Mark Gordon, directs the Wyoming Department of Education to set aside $25,000 per year for grants available to school districts to help cover processing fees of “Wyoming poultry, lamb, pork, beef and bison used in school meals.”

Speaker of the House Eric Barlow (Campbell, Converse County) noted during debate on the bill that yak were not included among the list of animals which could be donated toward school lunches.

“A yak is a bovine so they would be included,” House Agriculture, State and Public Lands & Water Resources Chair John Eklund (Laramie, Goshen County) said in response to this question.

If Star is now raising yaks, he is not the first in the Cowboy State to do so. A quick Google search shows that some ranches growing yaks include “Casper Creek Yaks” in Casper, “Yak Daddy Ranch” in Buffalo and “Prairie Wind Yaks” in the Casper area.

The International Yak Association says that “yaks are multipurpose animals” that can offer an alternative to beef and bison.

“Most yak producers adhere to a free-range, grass-fed regimen that yields a lean and flavorful product,” the International Yak Association says. “Yak milk is high in butter fat and produces exceptional cheeses, butter, and yogurt. When yaks shed their downy undercoat in the spring, the hair can be combed out, collected, and processed.”

“This soft Yak fiber is comparable to cashmere, angora or qiviut. The coarser outer hair or ‘guard hair’ is traditionally used to weave ropes, belts, and bags. It is also used for wigs in traditional Japanese theater.”

Could that be why Star is making an acquaintance with yaks? He is popular for makeups offered through his cosmetics company, which also offers some clothing items.

Star said on social media in April that he plans to open a fulfillment center in Casper and that he has hired an unspecified number of local employees.

In his story on Instagram, Star says he had made good on earlier promises to do more business in Casper after moving here part-time from southern California last year.

“I am employing all local people from Casper, Wyoming, here in this beautiful town, and we do have a lot of new businesses opening…slow and steady wins the race,” he said.

In the message, he said there will be some facilities in Casper shipping products from his Killer Merch and Star Lounge businesses.

Two businesses under Jeffree Star’s name have been filed with the Wyoming Secretary of State, including Jeffree Star Cosmetics, Inc., and Jeffree Star Pets, LLC.

Jeffree Star Cosmetics, Inc. was filed on Jan. 7, 2021. The LLC was filed on Sept. 4, 2020. The principle addresses of the businesses are in Chatsworth, CA. Emails to the Cody law firm that filed the requests were not returned.

When Oil City reported on Star’s recruitment center announcements in April, numerous messages to Jeffree Star Cosmetics for comment were not answered, and Star did not say where the Casper facilities were located or how many people are employed.

Whether yaks have anything to do with Star’s business plans in the area is uncertain. But the International Yak Association says that yaks are “easy keepers.”

“They require no special fencing needs,” the International Yak Association says. “Standard 4-strand barbed wire fence is sufficient. They are cold hardy and disease resistant. Birthing comes easily as the calves are relatively small at around 30 lbs.”

“Although yaks do not thrive in hot and humid climates, they can easily tolerate temperate summer conditions if shade trees and fresh water are available. Pound for pound, the stocking rate for yaks is similar than that of commercial cattle at about 2:1.”

Editor’s Note: A previous version of this article stated that Casper Creek Yaks was located in Moneta, but it is actually located in Casper. Oil City News apologizes for the error, and it has been corrected.