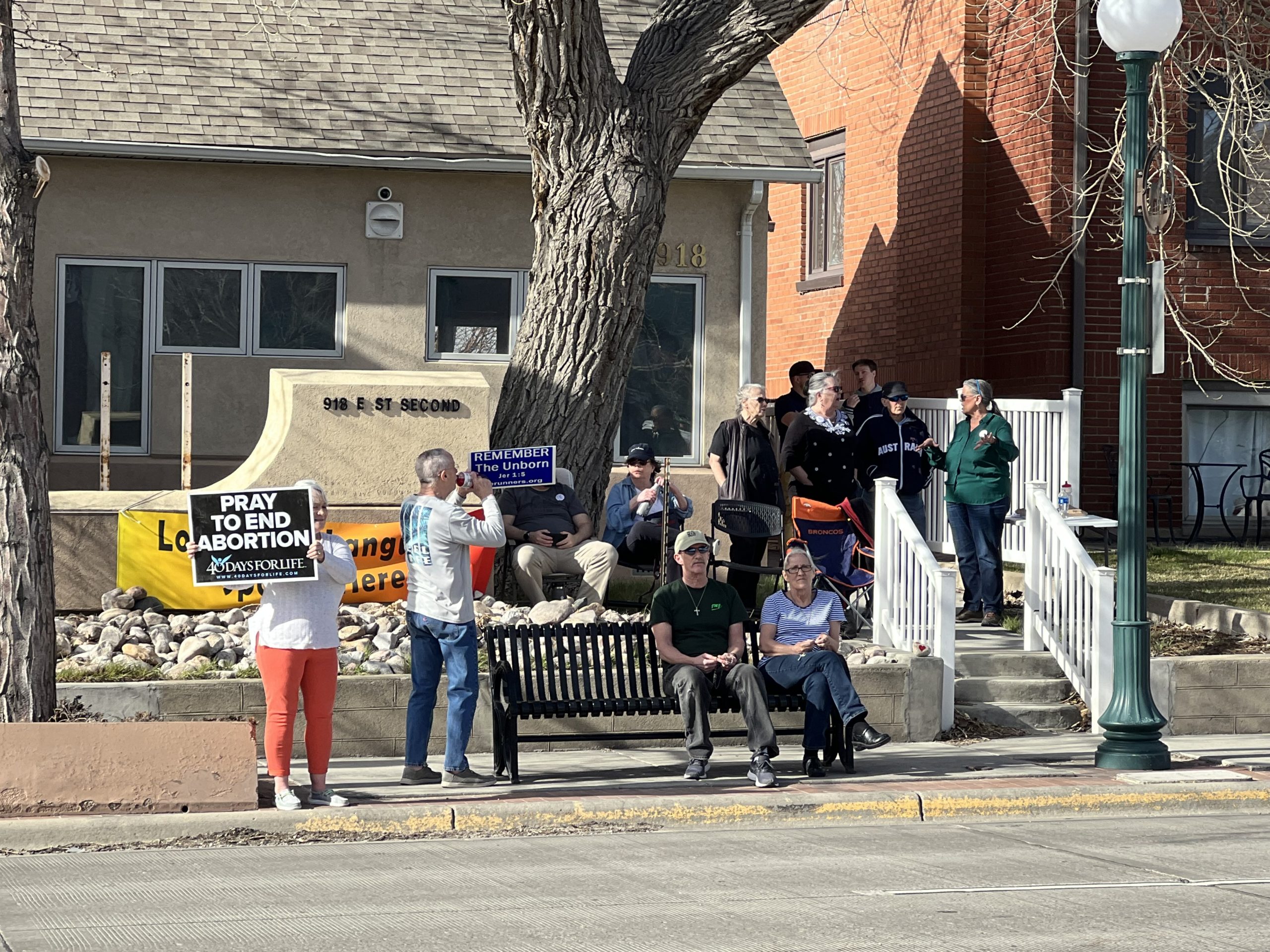 CASPER, Wyo. — In what could become a recurring scene in Casper, abortion opponents gathered on Thursday evening along East Second Street to protest plans for a new surgical abortion clinic.

The nonprofit organization Circle of Hope is working to bring the new clinic in an effort to give women the option of medical abortion up until the 10th week of pregnancy, aiming to provide options in areas it considers “abortion deserts.”

On Thursday, abortion opponents gathering at an empty lot at the intersection of Second Street and Jefferson, directing reporters to Bob Brechtel, a former state legislator, for questions about why people were gathering.

“We are just an unorganized prayer group of people wanting to come and pray peacefully, and to give that meaning we’re having every individual sign a peace agreement,” Brechtel said.

He said people of any faith denomination were welcome at the protest, though he added that people were gathering more in prayer than in protest.

“[We are] assembling just to take a stand towards a common cause and that’s in defense of human life,” he said. “I think most of us recognize a growth of the culture of death in our country.”

Brechtel said he has been involved in the pro-life movement since 1991. He said there are no specific plans set for future gatherings opposing the new clinic, but there is talk of expanding hours of prayer.

Abortion opponents that were gathered Thursday included some longtime Casper residents as well as people who have recently moved to the area. Ross Schriftman said he moved to Casper from Philadelphia in 2021. He said he is a member of the Jewish Pro-Life Foundation. He said he hasn’t always been staunchly opposed to abortion, but he has become more pro-life over time, in part over reflections about his family’s experiences.

While he is opposed to abortion, Schriftman said he doesn’t think anyone who ends up having an abortion should feel ashamed, but he wants to try and ensure that they know they have other options.

“It’s important that people understand there are other options,” he said. “That’s why I’m here.”

George Axlund said he attended the gathering Thursday as he opposes abortion as well as the death penalty.

“The government should not be executing criminals, and doctors and women shouldn’t be ending the life of the unborn,” he said. “It’s not right. Nobody has the right to take your life or mine.”

Axlund said he has previously attended abortion protests near Our Lady of Fatima Catholic Church and will show up if more gatherings opposing the new Second Street clinic happen.

With abortion opponents planning to continue making their opposition to the new clinic in Casper visible, Circle of Hope Community Advisory Board member Leslie Kee, a Unitarian Universalist minister, previously told an Oil City reporter that pro-choice supporters plan to “respond in love.”

Kee said the pro-choice coalition initially formed around the last state legislative session, during which a bill was passed that would outlaw abortion in Wyoming if the U.S. Supreme Court overturned the landmark 1973 Roe v. Wade decision. Kee said news of the clinic’s opening has already awoken support from the community, last evidenced by the turnout for a pro-choice event held last fall at David Street Station.